Elijah McGuire and Bilal Powell ripped off two big runs for the New York Jets against the Jags and today we break both of ’em down.

Deservedly so. For a team that some were comparing to the winless 2008 Detroit Lions, 2-2 after four is a mini-miracle diehard religions are usually built around.

The improvement of the offensive line.

Anybody who watched New York Jets preseason football would have taken the under (five games) when it came to McCown missing a game due to health. The five men in front of the Jets quarterback were downright atrocious in August. They were then terrible the first two weeks of the National Football League season.

Since Oakland, the unit has quietly been much improved. They broke through this past Sunday in the win over the Jacksonville Jaguars. New York turned back the clock to its ground-and-pound days, rushing for 256 yards on 32 attempts.

Two of the big boy runs came at 69 and 75 yards, Elijah McGuire and Bilal Powell, respectively.

Powell’s was first and it was a big-time play that not only provided an answer to Leonard Fournette‘s opening touchdown, but immediately got the crowd going.

The Jets come out in a 22 personnel (two running backs, two tight ends, one wide receiver). It’s a heavy package. Jacksonville counters on the 1st-and-10 with a base 4-3 and a safety in the box:

Interestingly enough, the Jags play it perfectly. Powell just took advantage of a nice hurdle and an unsuspecting defense:

It’s a power run play to the right, the strong side. It’s a pitch, but James Carpenter pulls from his left guard spot and leads the way in conjunction with now full-time fullback Lawrence Thomas.

The run is ultimately stopped due to one too many guys in the box. Brian Winters get to the second level but cannot completely clean up his block. In any event, Powell took advantage and scampered to the house for the Jets second-longest touchdown in franchise history.

McGuire’s big-time run came on the Jets first possession of the second half. This one didn’t rely on anything spectacular such as falling down untouched and fooling ’em.

It was a 1st-and-10. The Jets came out in an 11 personnel (one running back, one tight end, three wide receivers). Jax countered with their nickel, but, like most of the day, showcased a loaded box (seven in the nickel). 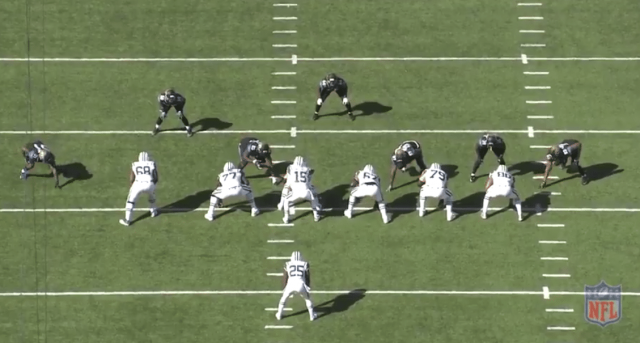 The play is a zone run to the left, the weak side and McGuire uses top-notch one-cut ability and vision to see that the A-gap is there:

The first takeaway revolves around McGuire. The kid is a stud, especially in a zone-blocking scheme. He’s decisive and explodes through the hole once he determines the right gap.

Secondly, look at the Jets O-line on this zone run. Wesley Johnson does a terrific job in simply guiding his man to the left. Carpenter gets to the second level in a hurry as does Winters who pancakes the MIKE. But the man who really makes the play go from a seven-yard gain into a 69-yarder is Austin Seferian-Jenkins who stays on his block on the backside throughout.

These two enormous gains have gone towards the Jets total for the season equaling out to 130.8 rushing yards a contest. That number ranks seventh in the NFL heading into Week 5.