The anatomy of one NFL play is more complex than anybody thinks. For the New York Jets, a Sam Darnold-to-Robby Anderson TD fits the bill.

FLORHAM PARK, NJ—An NFL broadcast can oftentimes last for over three hours. The total time viewers watch live-action (with the ball actually in play) averages out to a measly 10:43, per a 2010 Wall Street Journal study.

So why does it feel as though analysts who possess the ability to break down the X’s and O’s never have enough time to hit on everything? Well… it’s simple: there actually is too much to go over during each four-second play.

Outside of its nature of pure will, football is a game of strategy. Coaches deploy their pieces as if it was a game of chess, attempting to punch, counterpunch and think multiple moves ahead.

The anatomy of a singular play is complex, especially when a touchdown is involved. The New York Jets’ first score against the Pittsburgh Steelers in Week 16—a Sam Darnold-to-Robby Anderson beauty—is no exception.

The ninth play of the Jets’ opening drive featured a challenge. Nine yards for a first down on an excellent drive that kickstarted the game, something Adam Gase’s offense has excelled at this season.

At the 23-yard-line, a Sam Ficken field goal try would equal 40 yards. Darnold cannot take a sack and Gase cannot play it conservatively, but he knows the Steelers defense won’t lag. They’ll play the sticks aggressively, at the very least. 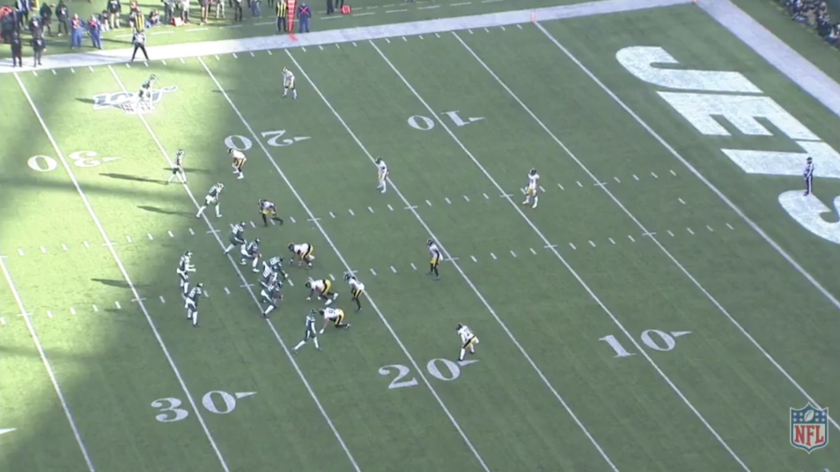 Darnold scans the defense and nothing is out of the ordinary. Pittsburgh’s usual single-high/three-deep look is fully intact on this crucial 3rd-down. 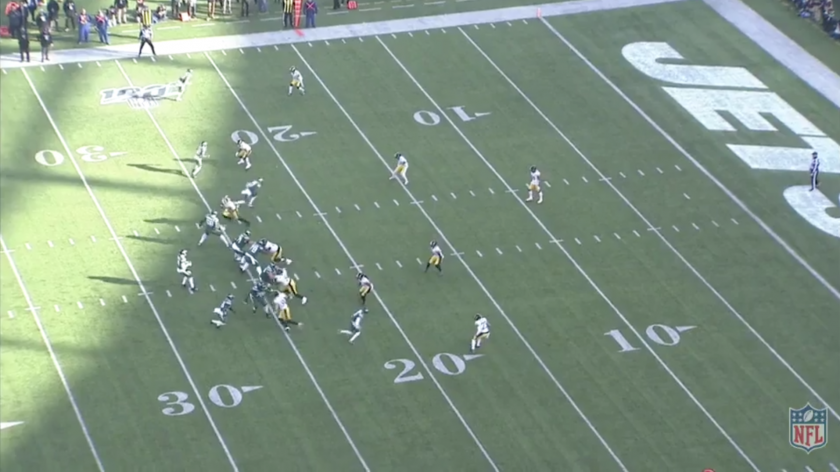 By the time Darnold takes the snap, the defense remains vanilla. The Steelers send four at the quarterback with two excellent bookend rushers in T.J. Watt and Bud Dupree.

Therefore, the young quarterback knows he should have time. His five big heavies should handle the four-man rush for at least a standard 5-to-7 drop. 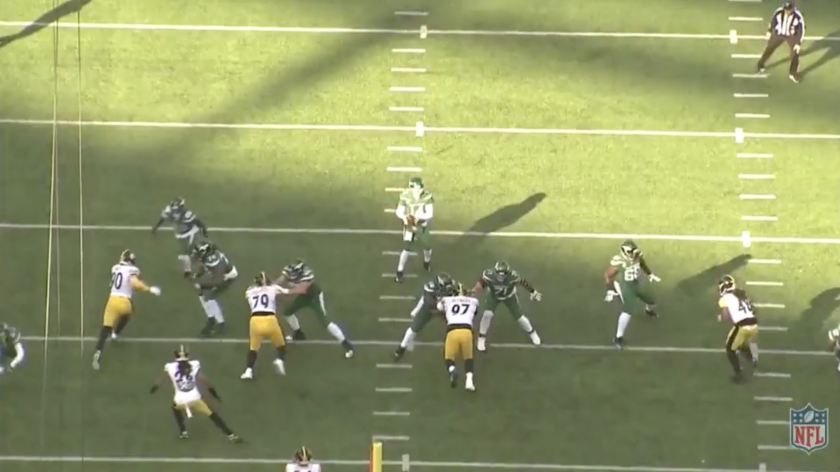 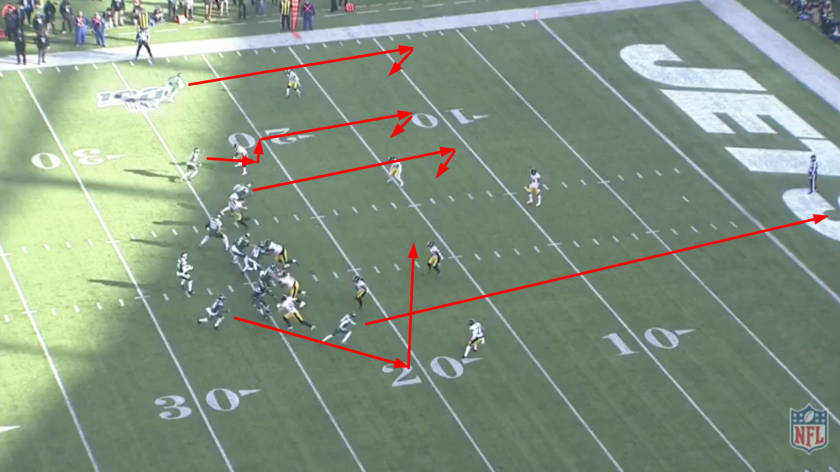 This play is designed for Darnold to hit something on the right side. Of course, the left side is available in the right coverage, meaning a man-to-man look; but the Steelers go with a zone.

Notice the Z-close alignment of Anderson. This is intentionally done by Gase for a reason. On the previous nine plays, Pittsburgh deployed a single-high look with cornerback lag on the outside seven times. The other two plays featured a two-deep look that even saw the strong safety messing around with a lurk/robber position pre-snap.

The soft spot in the zone against a single-high/three-deep look is the seam. (Against a two-deep zone, it’s the middle of the field on a post or deep dig or down the sideline on a fade/9-route.)

Therefore, Anderson’s seam out of the close alignment is the perfect call against this Steelers pre-snap look and Darnold should be looking his way from the jump. 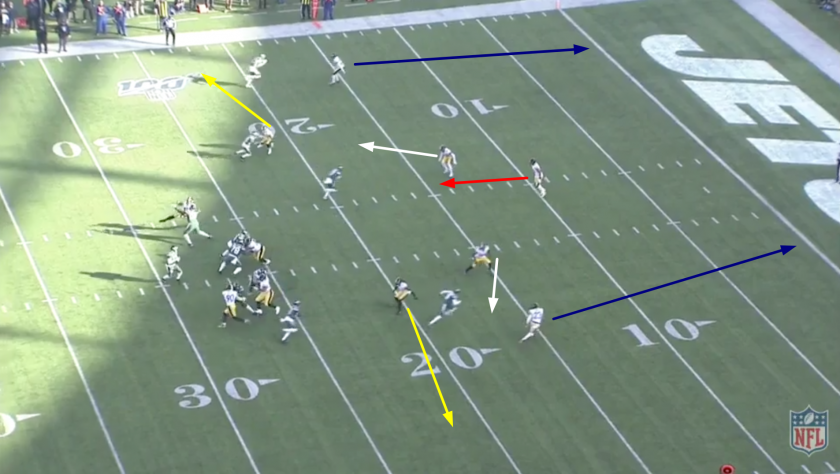 The Steelers gamble with the coverage. Instead of allowing the free safety to take his usual deep middle-third zone, he jumps up into a robber position, looking to take away the sticks over-the-middle.

Darnold sees it and knows he doesn’t have to adjust. Instead of looking to fit the seam into Anderson against three-deep, he can do it against a two-deep CB look (with the corner maintaining outside leverage).

The free safety action to robber is the key.

Luckily, there wasn’t much for young Darnold to think about on this one. Anderson represented the primary target initially—especially if single-high/three-deep was the look—and he turned out as a better choice once the free safety walked up into a robber.

The only thing Darnold had to worry about was the strong safety trailing, who helped bracket Anderson. 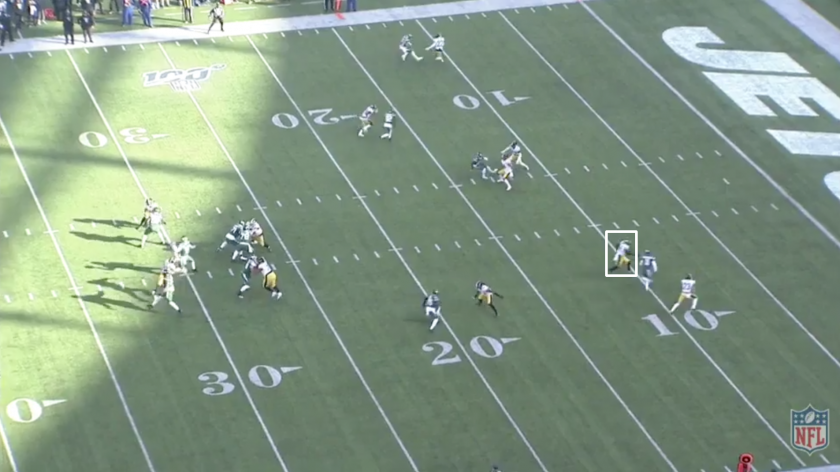 It didn’t matter. Darnold’s strong and confident throw coupled with perfect placement allowed Anderson to make a tremendous catch—one that showcased the greatest evidence that he can be a No. 1 receiver in the NFL. 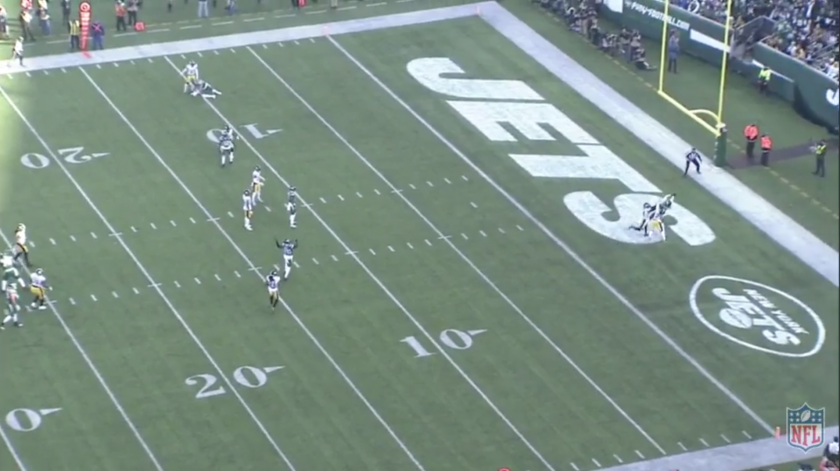 It’s not always this easy. Granted, the throw and catch were difficult; it was the pre-snap primary target remaining the perfect choice that turned out as a relatively easy quarterback read on this one—thanks to the single-high move to robber.

In the end, credit Darnold, Anderson and Gase. Especially credit the play-caller for knowing to place his top wideout in the close alignment to run that seam against a familiar Steelers single-high look.

Sam Darnold is battling through a lot of inconsistencies right now (more coming on that), but this toss to Robby Anderson is as good as it gets against PITT.

Solid job by Adam Gase with the Z-close/seam on 3rd against this PITT often 3-deep defense. #Jets pic.twitter.com/rWYPQHk9VR