One of the best players in New York Jets history has announced his retirement from the game after 11 years in Darrelle Revis.

Revis Island is being shut down officially after 11 marvelous years in the National Football League. Darrelle Revis announced his decision via his Instagram:

“For the past 11 years, it has truly been an honor to showcase one of my greatest gifts to the world. Today I am closing a chapter in my life that I once dreamed of as a kid and I am officially retiring from the National Football League. The game of football has opened doors for me I once thought were nearly impossible to get through.

My passion to play the game at an elite level brought fun and excitement to the term ‘shutdown corner’ which was nearly on the verge of extinction. Covering some of the toughest assignments in league history was a challenge every Sunday. But also an honor within this game we all love. I would like to thank my coaches, teammates, and mentors who have made a significant impact in my life and helped to create amazing memories that my family and I will cherish for a lifetime. I’m excited as to what lies ahead as I pursue new ventures in different industries. Long live Revis Island.”

Future Hall of Fame CB Darrelle Revis has announced his retirement from the NFL. One of the best to ever do it. https://t.co/wShXnJ7j7p pic.twitter.com/Q9eymczBab

Revis will always rank in the same breath as Deion Sanders. He was one of the best lockdown corners to ever play the game and should’ve been the Defensive Player of the Year back in 2009 with one of the best single-season performances we’ve ever seen.

The man was snubbed in favor of Green Bay Packers defensive back Charles Woodson whose statistical output allowed him to edge Revis’s dominance out. 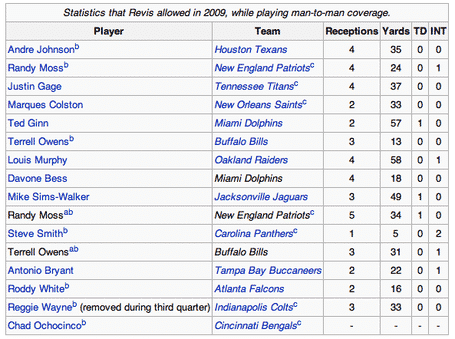 Revis will have to wait through the formality of five years until he is fitted for his Pro Football Hall of Fame jacket and gets his bust in Canton, Ohio. The next big question to consider now that Revis’s career is officially over is this: Is Darrelle Revis the greatest player in franchise history? His competition is Joe Klecko, Gerry Philbin and Mark Gastineau, but Klecko is probably the lone competitor regarding this question.

Either way, No. 24 will forever be remembered as one of the NFL’s most dominant cover-corners.