Diehard New York Knicks fan Adam Sandler is balling out on Long Island in pickup games like he isn’t a massive celebrity.

Adam Sandler is well-known all over the world, but he has his roots in New York. Like plenty of New York kids growing up, Sandler fell in love with basketball. He still has that passion for hoops and was seen playing pick-up on Long Island over the weekend.

Friend sent me this video of Adam Sandler hoopin’ on Long Island… He’s out here playing pick up everyday 😂 pic.twitter.com/9JzbqQyeaK

Sandler looks like your prototypical undersized guard from Brooklyn — comfortable with the ball in his hands, always looking for the open teammate, and willing to mix it up inside for a rebound. Sandler’s teammate probably wants that three-pointer back.

Basketball has long been a part of Sandler’s acting career. In one of his more recent films — “Uncut Gems” — Sandler plays a jeweler with a gambling addiction. Boston Celtics legend Kevin Garnett played himself and the plot heavily revolves around a Celtics playoff run.

It wasn’t long ago that the former “Saturday Night Live” star was making a cameo appearance as Opera Man to try and lure Kevin Durant to New York. That recruiting pitch failed, but things are going well for his Knicks all the same.

Sandler is a diehard Knicks fan who must be loving the fact that his team is going to have home-court advantage in a playoff series.

Hey, maybe the Knicks could use an extra body to play point guard? Who wouldn’t love to see Sandler and Trae Young go toe to toe for seven games? That would make for one hell of a movie. 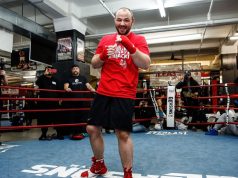