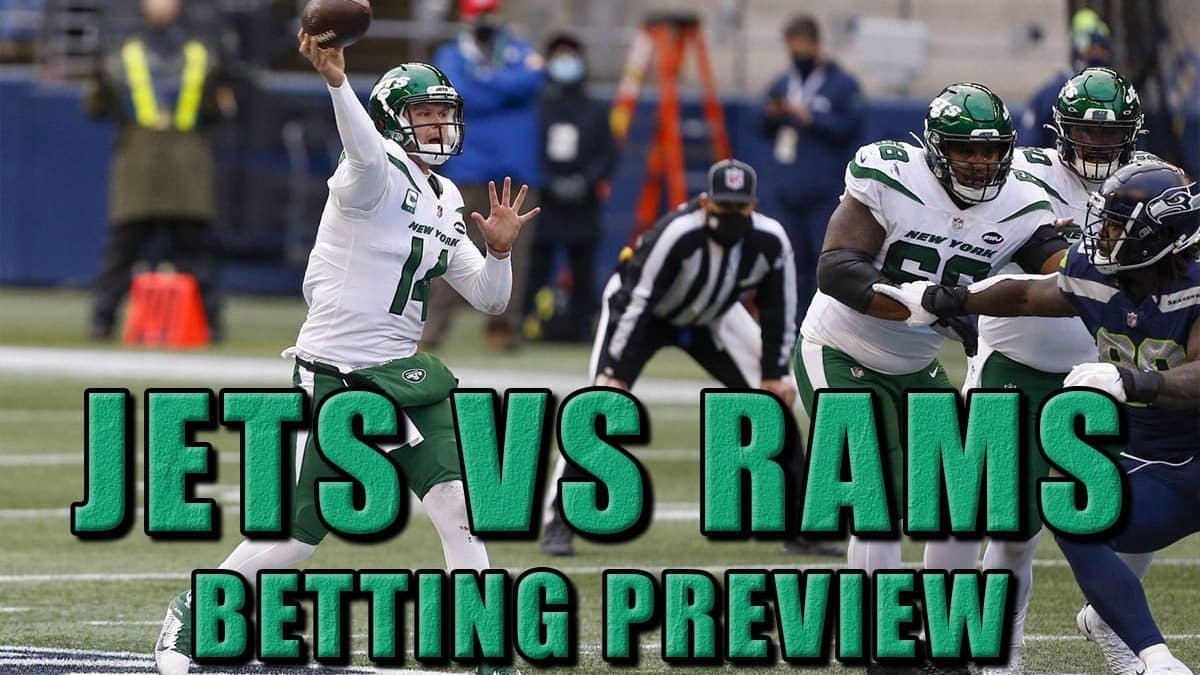 The Jets are out West for the second consecutive week and will take on the high-powered Rams at SoFi Stadium in Inglewood, California. New York is 0-13, and after a 40-3 blowout loss to the Seahawks this past Sunday, there’s little hope it’ll win a game in 2020.

Could the Jets pull off likely the upset of the year against the Rams? Let’s take a look at the Jets vs. Rams odds and provide our picks and a prediction.

Yes, the spread is extremely wide and the moneyline is insane, but it’s all reasonable. The Rams are multiple steps above the Jets in terms of talent, coaching, and essentially everything else. They’re one of the top teams in the league while the Jets are the only winless ballclub remaining.

This game will not be close, and while the Jets seemed to be improving (only losing to the Raiders because of an awful cover-zero call by former defensive coordinator Gregg Williams), they basically came back down to earth amid the 40-3 loss to the Seahawks.

Rams bettors, don’t sweat the risk. Los Angeles has this in the bag.

The Jets are hopeless at this point. They’re 0-13, the coaching staff is on its way out, and if they do indeed land the top draft pick, quarterback Sam Darnold will be as well.

I understand this is an extremely wide spread, but don’t worry about it. The Rams are hot and have won four of their last five games, while the winless Jets need to travel out West for the second consecutive week. Not to mention, the Jets are dealing with multiple injuries and just placed edge rusher Jordan Jenkins (shoulder) on injured reserve.

The Rams are the better team by three possessions (what the point differential needs to be for them to cover). They won’t slow down against the putrid Jets either, considering they’re still in a tight race with the Seahawks for the eventual NFC West title.

Los Angeles is 8-5 against the spread while the Jets are 4-9 in those regards. The Jets’ average losing margin is also 16.2, a mark that’s hovering around this spread.

Oh, and if you need even more motivation to take the Rams, here you go…

Jets-Rams Total: Hammer the Under

While I believe the Rams will cover the 17.5-point spread, I still think the under will hit on the total (43.5).

The Rams will score a significant number of points en route to a victory, but that doesn’t mean the Jets will as well.

Entering this game, Gang Green is the worst scoring team, only putting up 14.1 points per game. It’ll also be going up against a Rams defense allowing just 18.9 average points (3rd in the NFL).

The Jets offense is so putrid on the scoring front that even the Seahawks game would’ve hit this under despite the fact that Seattle put up 40.

Adam Gase hasn’t been able to figure out any opposing defense this season; don’t expect him to all of a sudden flip the switch against a strong Rams unit.

Nine of the last 10 games in which the Rams were favored have also hit the under — a statistic to consider heading into this matchup.

Jets-Rams Prediction: Take the Rams on the Moneyline

Unless you’re the most optimistic Jets fan this world has laid eyes on, you’ll agree with this pick.

As was mentioned before, the Rams are more talented in basically every area of the game: offense, defense, coaching, you name it.

I understand the risk ($1,667 bet to win $100) is so major that it almost seems comical. Nonetheless, this should be an easy cash grab.

The Rams are hot, while the Jets are ice cold and have been since last year. Simple.

Per DraftKings Sportsbook, the Jets have lost each of their last 30 games when entering as heavy underdogs (greater than +7.0 points). Yes, that’s right. Thirty games.

Say what you want about the pair of aforementioned picks prior to this section. However, the moneyline prediction is easy.