As the Jets prepare for a Week 3 battle with the Cincinnati Bengals, it’s OK to still be in shock about what they did in Cleveland this past Sunday. Being down 13 points with less than two minutes to play usually isn’t a recipe for success, but it was this time for wide receiver Garrett Wilson and the rest of Gang Green.

The rookie wideout from Ohio State has had two very different experiences in his first two weeks as an NFL player. In Week 1 against the Ravens, he caught four passes on eight targets for 52 yards. But in Week 2? He was targeted 14 times and turned that into eight catches for 102 yards and his first two career touchdowns.

It’s quite evident that he has the potential to be an elite playmaker. Do you know who agrees? Former Jets wide receiver (and top overall pick) Keyshawn Johnson. He’s the kind of dude who always wanted the ball so he could make something happen, and that’s what New York should do with Wilson, in his opinion (quotes via New York Post):

Johnson went on to give his best Muhammad Ali impression by saying the Jets will “be fine if they let him shine”.

It’s only been two weeks, but the proof is in the pudding so far. In one instance, Wilson wasn’t super involved in the game plan, and the Jets’ offense didn’t do much of anything. That story completely changed the following week when the first-year wideout was featured more prominently. We’ll see what head coach Robert Saleh and the coaching staff have in mind for Wilson against Cincinnati this Sunday.

If it were up to Keyshawn, though, it’d be pretty simple: just get the ball in Wilson’s hands. 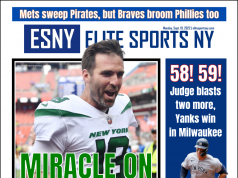