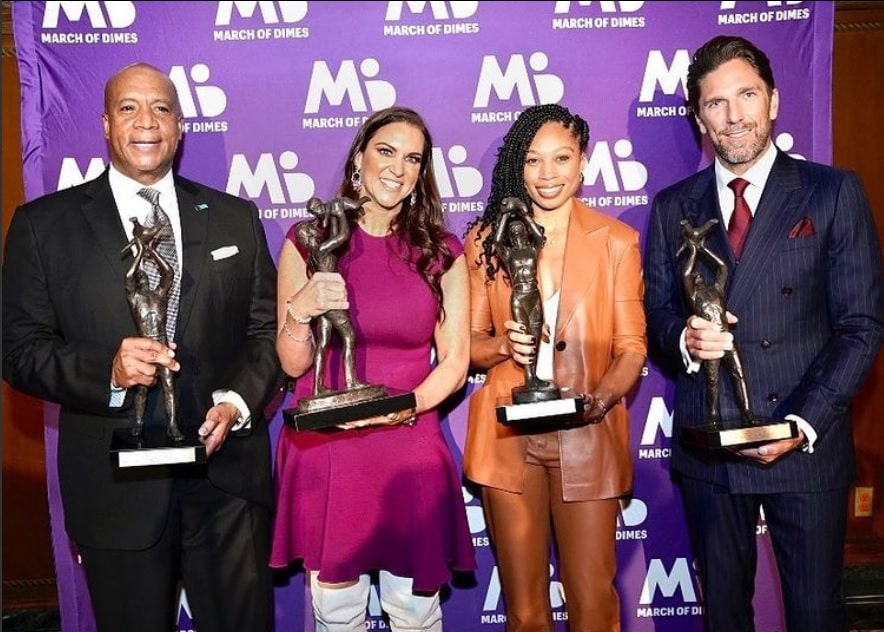 Lundqvist joined an inspirational group of honorees at the March of Dimes Sports Luncheon.

March of Dimes has long fought for the health of mothers and babies through research, education and advocacy. Each year the organization hosts a Sports Luncheon that honors members of the sports community who go above and beyond to support the organization.

Beyond raising money and awareness, the luncheon also draws a who’s who of athletes, media and sports executives. Eli Manning was seen chatting with Larry Fitzgerald not too far away from Vince McMahon and his daughter Stephanie, who was an honoree at the event. And NBA Commissoner Adam Silver slowly strolled by as WNBA Champion Candance Parker spoke with other guests.

Parker, who is fresh off leading her hometown Chicago Sky to a WNBA championship, co-hosted the event with broadcaster Ian Eagle. She is also the mother of 12-year-old daughter, Lailaa.

When asked about her involvement with the event Parker emphasized the importance of empowering women and mothers.

Lundqvist, who came to New York in 2005, gave credit to the Rangers and March of Dimes for giving him and his family perspective on the importance of community work.

Honoree Allyson Felix is a mother to a 2-year old daughter and just so happens to be the most decorated American track and field athlete in Olympic history.

Felix gave birth to her daughter at 32 weeks; the March of Dimes holds a special place in her heart. Felix also admitted that she always got nervous before some of her big races, including the USA-dominated 4×400 relay because “you don’t want to be the one to mess it up.”

The most decorated track athlete in U.S. Olympic history has a special connection with @marchofdimes and admits to always being nervous when competing. #allysonfelix @allysonfelix @TeamVivalo pic.twitter.com/CuvEouqipW

McMahon is the CBO of the WWE, daughter of Vince McMahon and wife of wrestling legend Triple H. The WWE has four key pillars to giving back: Inclusion, Service, Empowerment, and Hope. According to McMahon, there is not a more important organization that supports moms and babies than The March of Dimes.

“I can’t think of a more important organization, especially during this time, that celebrates Mom’s and babies” – @StephMcMahon at the @MarchofDimes Sports Luncheon. @TeamVivalo pic.twitter.com/yfIFxr6nxl

When asked about his inclusion in this event, Big Ten Commissioner Warren simply stated “This is what life’s all about.”

“This is what life’s all about”@teamvivalo speaks with @bigten Commissioner Kevin Warren about working with the @marchofdimes and about the epic @umichfootball vs @ohiostatefb game. pic.twitter.com/vmjlhAudaO

In a world that is upside down with uncertain health issues, it is refreshing to see that The March of Dimes continues its amazing efforts in support of mothers and babies.