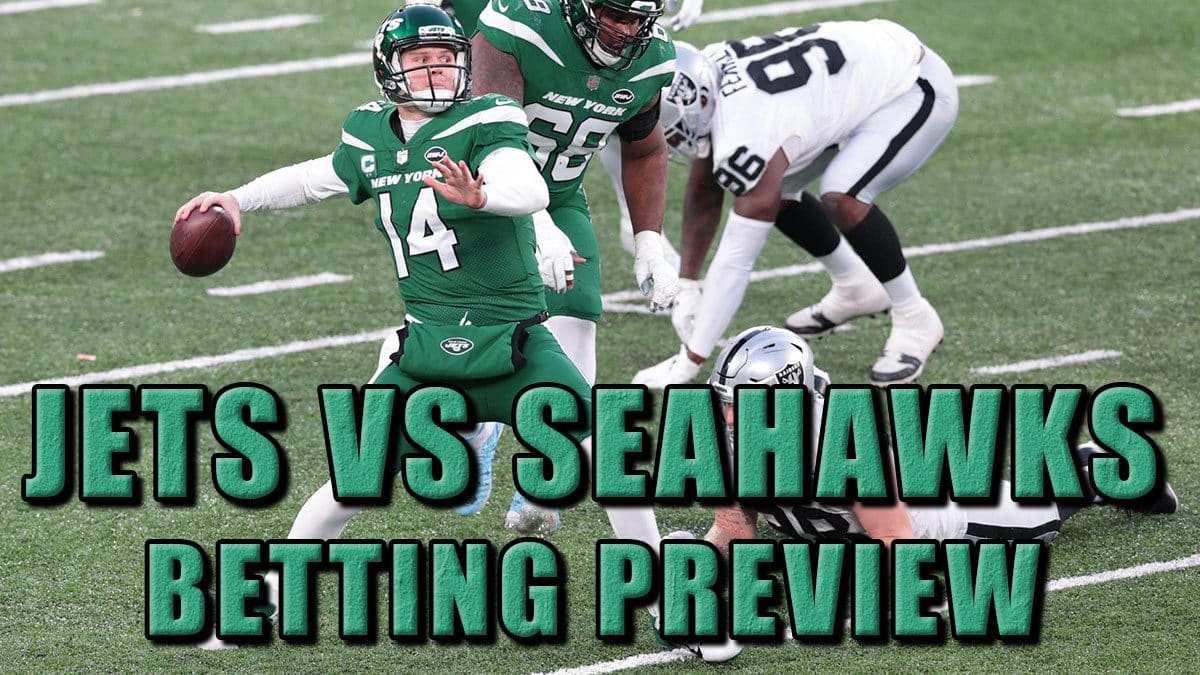 The Jets travel out West for their Week 14 matchup with the Seahawks after most recently suffering a heartbreaking loss to the Raiders last Sunday. Even though they’re 0-12, will they still be able to defeat the 8-4 Seahawks on the road? Let’s take a look at the Jets vs. Seahawks odds and provide our picks and a prediction.

Get 50-1 odds on the Giants, Eagles, or Steelers to score 1 point at FOX Bet in NJ here or in PA here. Read more about it here.

After they were soundly beaten by the Dolphins in Week 12, the Jets looked improved against the Raiders up until the game-winning Hail Mary touchdown pass from Derek Carr to Henry Ruggs.

The Seahawks, on the other hand, couldn’t put together consistent offensive production against a strong Giants defense in Week 13, only conjuring up 12 points en route to their fourth loss on the year.

Nonetheless, Seattle is far more talented than this winless Jets team and shouldn’t experience many issues winning outright on Sunday.

This doesn’t have to be a complicated discussion: the Seahawks employ the better quarterback, better coach, better offense, and better overall roster. There’s a reason they’ve won eight games this season while the Jets are the sole winless ballclub in the NFL.

Thus, it’s not a stretch at all to say the Seahawks will win this game outright, even if the Jets did look improved against the Raiders last week.

Despite the risk ($715 wager for a $100 profit), this is an easy cash grab that you need to take advantage of prior to kickoff (or before the line potentially changes).

For what it’s worth, the Jets have actually lost each of their last 29 games when entering as heavy underdogs (greater than +7.0 points), per DraftKings Sportsbook. Yes, you read that right — twenty-nine. It’s an absurd statistic that should lead to you opening your wallet for the Seahawks moneyline.

While I believe the Seahawks will win outright, I do have a feeling that it won’t be a blowout.

If the Jets were able to hang with the Raiders — a darkhorse AFC playoff team — all game long and essentially come a play away from winning the matchup, there’s reason to believe they’re improving. Not to mention they only lost by three to the Patriots and by six to the Chargers in Weeks 9 and 11 prior to their Week 12 loss to Miami.

Seattle, on the other hand, has lost three of its last five games, with the two victories during that span carrying an average winning margin of just 6.5 points. One of the wins was just a six-point victory over Carson Wentz and the struggling Eagles.

Given the recent state of either team, I don’t think it’s impossible for the Jets to cover the 13.5-point spread.

The Seahawks have failed the cover in five of their last six games held on a Sunday (this matchup will kick off at 4:05 p.m. ET on Sunday) and carry an average winning margin of just 7.1.

Per FanDuel Sportsbook, 51% of the spread bets are on the Jets. However, Gang Green is responsible for just 38% of the handle in those regards.

Jets-Seahawks Total Pick: Hammer the Over

Per DraftKings Sportsbook, the total is currently set at over-under 47.0, a reasonable mark that I think these two teams will actually surpass.

Need I say more? Russell Wilson will have a field day against a Jets team that just fired defensive coordinator Gregg Williams while Sam Darnold will look to have his best game of the year against a putrid Seahawks secondary.

This all should lead to the total easily surpassing 47.0 points.

FanDuel Sportsbook portrays that 54% of the bets and 57% of the handle is going towards the over.

The Jets did improve last week, and their continued efforts to develop as a team will lead to them covering the spread but not winning outright over Seattle.

Click HERE to get a $250 first deposit match with PointsBet.