When most people think about the history of the Nassau Coliseum, the New York Islanders 43-year run in the building comes to mind as well as the New York Nets especially the Dr. J years in the ABA. There’s also been plenty of other sporting events in the building that underwent a massive renovation between August 2015 and April of this year including college basketball, arena football, indoor soccer, and indoor lacrosse.

And you also can’t forget about tennis at the barn!

There is some tennis that has been part of the Coliseum’s DNA including the New York Sets of World Team Tennis as well as an exhibition match that Douglaston native John McEnroe played there. And now, tennis is making a return to the Coliseum in the way of the New York Open, a weeklong ATP men’s tournament coming to Uniondale this February.

“I think everybody is extremely juiced up about it,” said tournament director Josh Ripple from GF Sports, the event’s organizer. “I think the tournament is going to be fantastic, even in year one.”

The New York Open, formerly the Memphis Open, will take place from Feb. 11 to 18th and will feature some of the best players in the world.

The full tournament schedule is as follows:

The first four players to commit to the tournament are John Isner, Kei Nishikori and the 6th ranked doubles team of brothers Bob and Mike Bryan. In fact, Nishikori will try to be the 1st player to win this event as both the Memphis Open and New York Open as he won the tournament four times when it was in Memphis.

He’s also had prior success in New York having reached the finals of the 2014 U.S. Open.

“Playing in New York has always been exciting for me and to think I could win a fifth title during this ATP week would be amazing,” said Nishikori. “I’ll miss Memphis, but I know I’m going to love playing in New York.”

Meanwhile, Isner is another familiar name to tennis fans and a player who challenge for the 1st New York Open title. He has 12 career singles victories including two on this year’s ATP World Tour and he also beat the world’s number one player Rafael Nadal in last month’s Laver Cup in Prague.

“I’m excited about being one of the headliners for this first-time winter ATP Tour event in New York,” said Isner. “We hear NYCB LIVE (Nassau Coliseum) has been renovated to be a first-class state-of-the-art arena, and it’s getting good buzz among the players.”

The Coliseum was able to, not only acquire this tournament, but also attract big names because of the transformation of the building and the amenities it can now offer the players.

“We’re looking forward to playing in a new venue and can’t wait to be part of the first New York Open,” said Bob Bryan.

The tournament is also great news for local tennis fans that flock to Flushing Meadows for the U.S. Open during the summer as well as exhibition matches from time to time at Madison Square Garden and Barclays Center. But this is a real tournament that the hardcore tennis fan can get excited about when it’s cold outside. From qualifying to the final, it’s a week of dates that tennis fans will be able to circle on their calendars annually.

“We’re pretty confident that the fan is really going to be happy with the fact that they have this real credible tournament,” said Ripple. “We’re involved with the Coliseum for at least ten years. We’re here to grow this and be here for a very long time.”

For this tournament, the Coliseum is going to have a two-court setup. 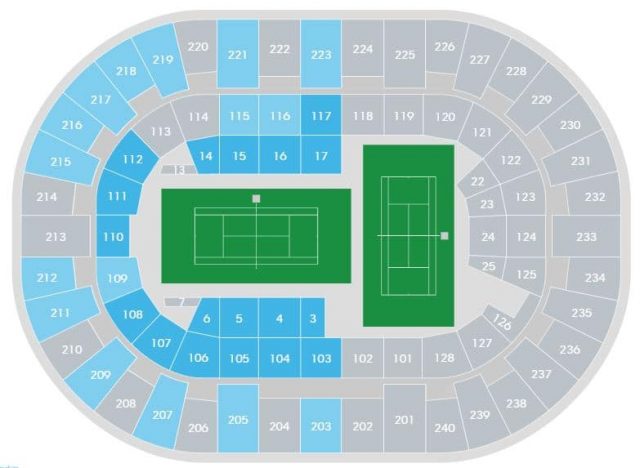 There will be a “stadium court” on one end of the arena with a capacity of 6500-6700 fans. On the other end of the Coliseum will be a “grandstand court” that will run in the opposite direction with the retractable lower level seats moved back to make room.

“When you retract those seats, the arena floor provides us the footprint to be able to put two pretty substantial courts in there,” said Ripple.

For most of the week, there will be action on both courts at the same time. Fans who hold “stadium” tickets will have the ability to walk around to the other side and watch the match taking place on the “grandstand court.” In between the two courts will be a thirty-foot-high hospitality structure that will serve as both a divider as well as a viewing area for 125-200 people.

A ticket for that area will give fans the best of both worlds.

“If you buy a ticket in that structure, you’re going to be able to watch action on both the stadium court and the grandstand court,” said Ripple.

While the tournament is mainly about the action on the court, there are going to be two other layers to the New York Open. While the qualifying round will take place on Sunday morning February 11th, that night will be a gala that will serve as the official start of the event. The plan is for the gala to include appearances by not only tour players, but also female players as well as other tennis and pop culture icons tied to the New York Area.

The tournament will also be attractive to tennis fans of all interests and ages because of the tennis as well as the “New York Open Experience” which will be located in the Coliseum’s Exhibition Hall. It will be similar to what you might experience while walking around the grounds of the Billie Jean King National Tennis Center during the U.S. Open.

There will be something for everyone.

“There’s going to be everything from the traditional sponsor displays that you would see at many tournaments to other types of lifestyle immersive activities,” said Ripple.

Growing up on Long Island, I went to just about everything at the Nassau Coliseum from the Islanders to the Nets, from indoor soccer to indoor lacrosse, to Billy Joel to the late Tom Petty, to the circus and ice shows, to the car and home shows in the Expo Hall. One of my fondest memories was seeing that John McEnroe exhibition match in person and I’ve always wondered why tennis never returned to Long Island other than the Hamlet Tournament at a country club.

“There’s great history,” said Ripple. “I wish there was more tennis there at the Coliseum.”

Well, perhaps the New York Open can be the start of a new tradition at the new Nassau Coliseum. Tennis fans in the area have been clamoring for another tournament and now there is one indoors with a unique setup.

For more information, go to www.NewYorkOpen.com.