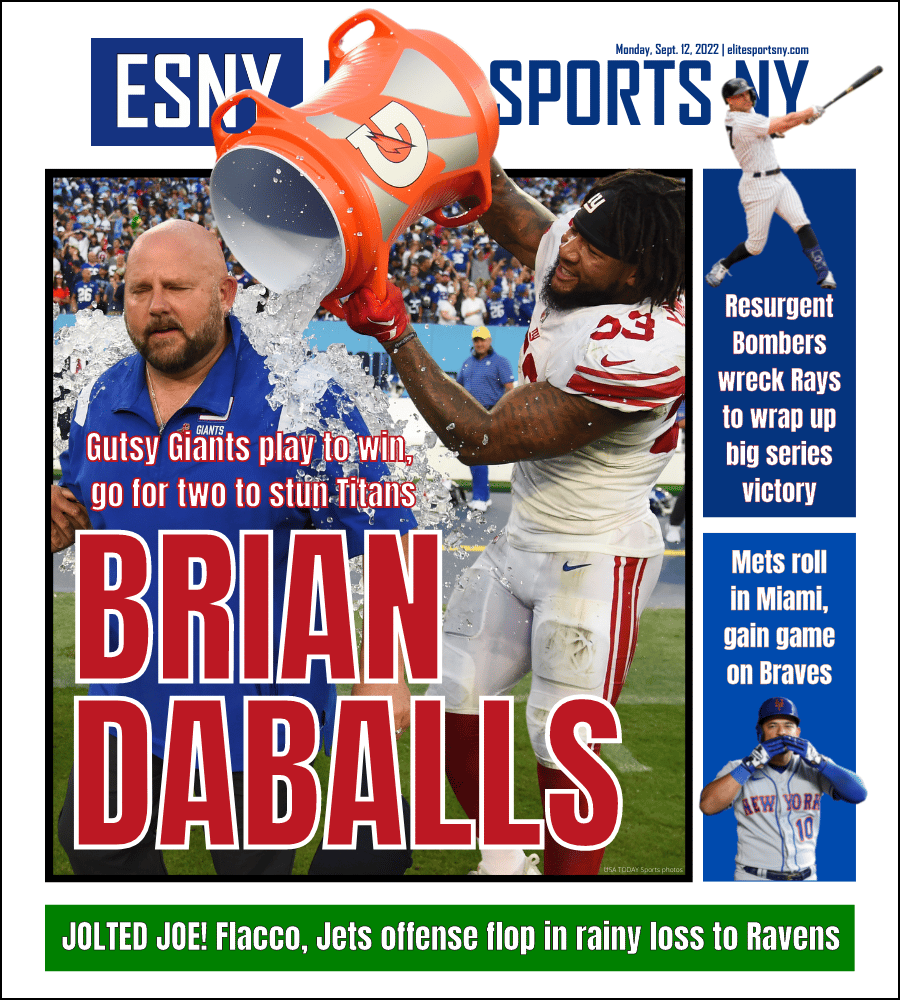 Giants 21, Titans 20. The Brian Daboll era has begun with a stunning triumph. The Giants upset the Titans, 21-20, on Sunday — escaping Nashville with a thrilling win after Tennessee kicker Randy Bullock missed a game-winning field goal attempt as time expired. The Giants had gone ahead moments earlier when Daboll boldly went for two and played for the win on the decisive drive. It’s the first time the Giants have won the season opener since 2016, when they beat the Cowboys on the road in former coach Ben McAdoo’s debut. That is the last time they won more than six games in a season; it is also their last playoff appearance. Complete coverage here.

Ravens 24, Jets 9. The Jets have an improved defense. That we can say with some conviction, even after this ugly season-opening loss to the Ravens in the slop. But the offense? It was cover-your-eyes bad in Sunday’s 24-9 defeat at MetLife Stadium. The rain didn’t help, of course. But that will go away. And yes, quarterback Zach Wilson will return at some point. But we still don’t know what exactly he is. And in the meantime Joe Flacco will remain a statue in the pocket, protected by an offensive line that is banged-up and looked brutal at times. The Jets carried plenty of optimism into this season, although they have been gradually leaking oil ever since the injuries to tackle Mekhi Becton and Wilson this summer. But it is not hard to see how things could get off the rails following this effort. Complete coverage here.

Mets, Yankees gain ground. The Amazins have regained a 1.5-game edge on the Braves in the NL East after Sunday’s win over the Marlins coupled with the Mariners’ win over Atlanta. And the Bronx Bombers slugged their way to a series win over the Rays to get some AL East breathing room with a 5.5-game lead.