On Saturday night, the New Jersey Devils (14-16-5) will look to win back-to-back games against the Columbus Blue Jackets (15-16-1) and improve to 5-1-0 since the holiday pause when they travel to Nationwide Arena.  It’s the third of four meetings between the Metropolitan Division rivals. Columbus won the first meeting on Halloween in New Jersey, 4-3 in a shootout and the Devils returned the favor with a 3-1 win at home on Thursday night. Their final meeting will also be in Columbus on March 1.

Let’s get into our Devils vs. Blue Jackets betting pick with player prop predictions, odds, and analysis for this January 8, 2022 matchup.

The Devils have been a completely different team since the holiday pause. Losers of six straight before the pause, New Jersey has won 4-of-5 to start the unofficial second half of the season and are doing it by generating offense with consistency for the first time in seemingly forever.

Jack Hughes, specifically, has found his offensive mojo, amassing 12 points (4G, 8A) in the last five games. Meanwhile, his partner-in-crime has been Jesper Bratt, who has eight points (2G, 6A) in the same time span.

The Devils have two players in the COVID-19 protocol. Reserve Mason Geertsen is unavailable, as is star defenseman Dougie Hamilton, although Hamilton was already out of the lineup recovering from a broken jaw.

As for Columbus, the haven’t quite had the success of the Devils since the holiday pause, with just one win in four games, dropping three straight.

Boone Jenner is the top goal scorer for Columbus with a dozen, while Jake Voracek and Oliver Bjorkstrand are tied for the team lead in points with 23. The hottest Jacket though may be Gustav Nyquist, who has five points, including three goals, in the last six games.

For Columbus, Alexander Texier, who is second on the team in goals with 11, is in the COVID protocol and will not be available tonight.

Here are the lines for Devils vs. Blue Jackets at FanDuel Sportsbook NY:

For some reason, the Blue Jackets tend to get off to fast starts against the Devils. In the last 11 meetings between the two teams, Columbus has won the first period outright 10 times. The game Thursday in New Jersey snapped a streak of 10 straight, as it was tied 1-1 after 20 minutes. While most teams in the NHL have excellent records when leading after one period, Columbus does not. They are just 4-4-0 when leading after one.

Then why take this bet if you like Columbus to win the game?

Because the Devils are 2-11-2 when trailing after the first period.

Take advantage of Columbus playing at home against a team they played 48 hours earlier and expect them to come out hard and win the first period. Also, after losing to the Devils Thursday, the Jackets are a small favorite to win outright, so you might as well take this gamble too.

Jesper Bratt to score at least one goal (+235, FanDuel Sportsbook)

Hughes and Bratt are really starting to develop great chemistry. Usually, when a young, top-end talent starts to come int ohis own, there is going to be a teammate who also reaps those benefits. Bratt is that guy with Hughes right now.

Hughes is on a real tear at the moment, so look for Bratt to be the beneficiary. Also, at +235, you can’t beat the odds, especially on a player who is feeling it lately.

We were surprised these odds were as close to even as they are. Voracek is the top assist guy on the Jackets with 22. It seems likely that if Columbus is going to score goals, that Voracek will very likely be in the middle of that offense.  This seems like a pretty good bet, even if its value is low.

You hear bettors telling you all the time that the “line is telling them something.” We always find that humorous because lines are set to draw action on both sides as evenly as possible. Still, the Devils are rolling, the Blue Jackets are scuffling, and New Jersey just beat Columbus two nights ago and is ahead of them in the standings… and yet Columbus is the favorite here? That’s definitely something to consider, especially with Columbus down one of its top scorers. As such, we’ll lay the wood… which is more like a few toothpicks here, and take Columbus in a close one. 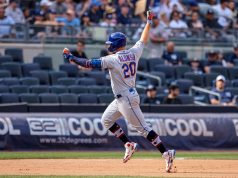