A look at the 2021-22 Devils after an excellent offseason.

The New Jersey Devils will look like a very different team this opening night than a season ago. They bid farewell to several players, especially at the trade deadline, including some beloved veterans.

However, the Devils had one of the best offseasons of any team in the league.

They added forwards, acquired much-needed improvements to their weak defense, and grew stronger at the goaltending position.

Let’s dive into some of the most notable roster changes and what they mean for the Devils this upcoming season.

The Devils’ big signing of the offseason, Dougie Hamilton is one of the best defenseman in hockey and will definitely improve New Jersey’s defense immensely.

The 28-year-old scores at an elite rate, gets the job done defensively, and is excellent on special teams. The Devils’ weaknesses are Hamilton’s strengths and he will be a welcome addition to this young team.

You can read more about Hamilton here.

Jonathan Bernier is a huge upgrade at the goalie position. The starting job is obviously still MacKenzie Blackwood’s, but Bernier is a great backup option and is capable of doing well as a temporary starter, as well.

Bernier was one of the lone bright spots on a terrible Detroit Red Wings team last season. If Blackwood is able to play as well as we’ve seen him play in the past, this could become one of the best goaltending tandems in hockey.

You can read more about Bernier here.

The second biggest signing for the Devils this offseason was LW Tomáš Tatar. It’s a miracle that no one signed Tatar before the Devils got him and, to make this even sweeter, they got him on a bargain deal: two years, $4.5 million AAV.

He scores and is an elite playmaker, something the young Jack Hughes will benefit from greatly.

You can read more about Tatar here.

One of the first moves the Devils made was acquiring LHD Ryan Graves from the Colorado Avalanche in exchange for Mikhail Maltsev and a 2021 second-round pick.

The 26-year-old scored two goals and 15 points last season, but is fantastic defensively and brings much-needed size to this Devils defense. He will serve as a notable improvement to the top-four and will be expected to contribute greatly. 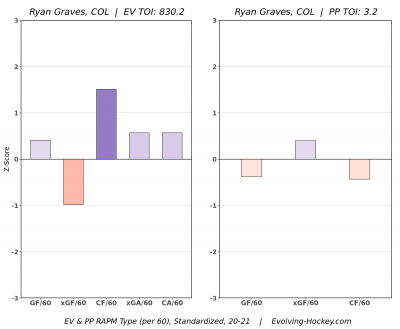 You can read more about Graves here.

RHD Christián Jaroš is a depth defenseman whom the Devils signed to a two-way deal after acquiring him from the Sharks in exchange for Nick Merkley.

Jaroš played in only seven last season. He likely won’t start regularly for New Jersey, but is a decent depth option as a big, physical defenseman.

We’ll start with the Devil who was taken by the Seattle Kraken in the expansion draft. In his first full season with the Devils, 23-year-old RW Nathan Bastian emerged as a relatively impressive youngster in the Devils’ bottom-six.

In 41 games, he scored three goals and 10 points, but was especially notable as a defensive forward. At 6’4″, Bastian is huge and uses his physicality well.

Bastian was also one of the better players on the worst penalty kill in hockey. Bastian had the most potential and upside of the Devils that the Kraken could’ve taken. He’ll be a good addition to their team and will be missed in New Jersey.

The good news for the Devils is that they have internal options to replace Bastian, such as Marián Studenič, who looked promising in the few games he played last season.

Will Butcher’s tenure with the Devils was up-and-down and eventually disappointing. The LHD was incredible his rookie season and expectations grew to be sky-high for the former fifth-round pick.

Unfortunately, Butcher regressed more and more each season thereafter, so much so that he played just 23 games for the Devils last season.

Even though Butcher has been nearly disastrous for the Devils lately, the way the team parted with him was odd.

They sent him as well as a fifth-round pick in the 2022 draft to the Buffalo Sabres on the first day of free agency in exchange for future considerations. This was a puzzling move since Butcher is under contract for one more year and is still just 26 years old.

Nevertheless, the Devils’ defense will look much better next season than it did in 2021. It’s still a shame that things never worked out with Butcher.

When the Devils traded for Colorado Avalanche defenseman Ryan Graves, they sent a 2021 second-round pick and LW Mikhail Maltsev the other way.

2020-21 was Maltsev’s rookie season and there were some bright spots. He shot at a high rate and showed offensive potential in the 33 games he played as fourth-liner.

Parting with Maltsev allowed the Devils to upgrade significantly defensively, so this was a great move for them.

RW Nick Merkley is another forward prospect the Devils bid farewell as part of their project to improve the defense. They sent him to the San Jose Sharks in exchange for defenseman Christián Jaroš.

A promising prospect, Merkley was acquired by the Devils as part of the package they received from the Arizona Coyotes in exchange for Taylor Hall.

The 24-year-old still has promise, but his development hasn’t gone as the Devils had hoped. Merkley wasn’t a regular in the Devils’ lineup last season, scoring two goals and 10 points in 27 games.

Some fans will say that the Devils never really gave Merkley a fair chance to grow and thrive, especially by rarely allowing him to get consistent playing time.

Thankfully the Devils have forward depth within the organization and did use Merkley to improve their very weak defense.

The signing of Ryan Murray was supposed to bring much-needed veteran experience to a young and weak defensive group, but Murray had another disappointing season.

He did notch 14 assists, but didn’t score a single goal in the 48 games he played and had a poor defensive season. The Devils definitely upgraded by adding much better veterans this offseason and letting Murray walk made sense for New Jersey.

There isn’t much to say about Matt Tennyson, who played just 21 games and scored a goal and three points.

He was abysmal defensively and, evidently, was unable to contribute positively to the team and defensive corps.