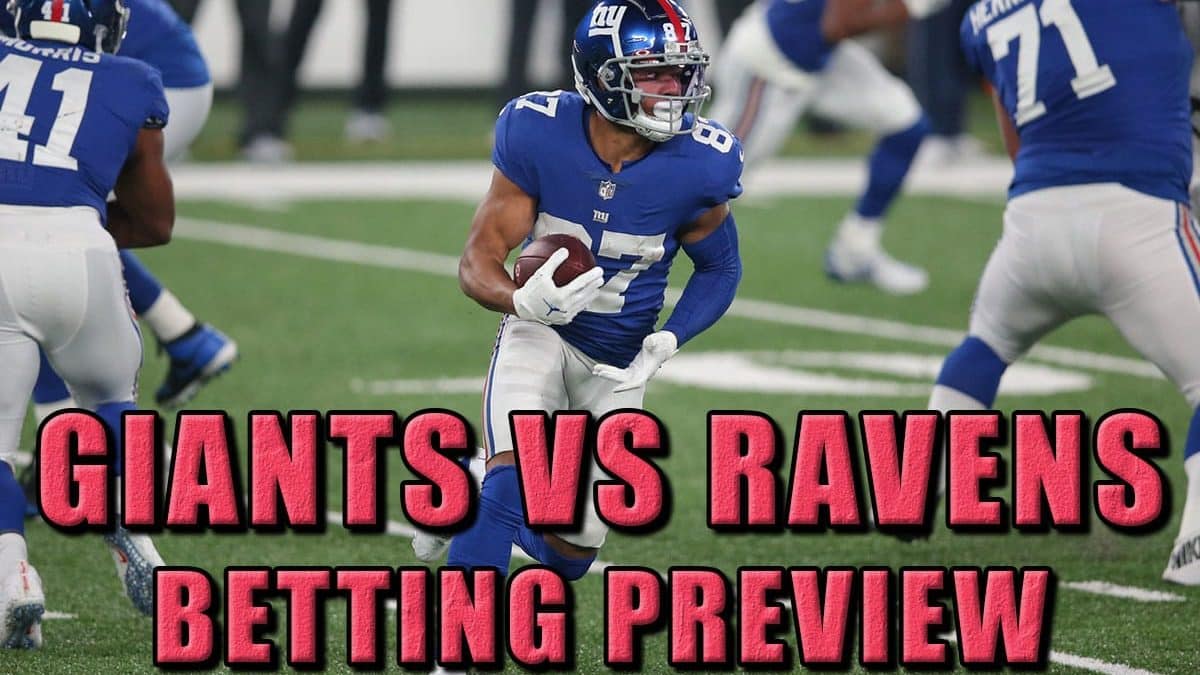 The Giants are in third place in the NFC East after two consecutive losses but still sit just a game back of the division lead.

In spite of the recent slump, the Giants will enter Baltimore on Sunday afternoon with the motivation to oust the Ravens in a must-win game. Let’s dive into our Giants vs. Ravens odds, picks, and prediction.

The Giants aren’t doing too hot at the moment, having lost each of their last two games while the Ravens are on a three-game winning streak. The defense didn’t play so well against Cleveland while the offense continues to struggle on the scoring front (13 points combined in the pair of defeats).

Not to mention, Big Blue is dealing with injuries to a number of starters. Quarterback Daniel Jones (hamstring/ankle), tight end Evan Engram (calf), wide receiver Golden Tate (calf), linebacker Blake Martinez (ankle), and rookie slot corner Darnay Holmes (knee) are all listed on the team’s injury report, with Tate’s status for this Sunday deemed as “out.”

Taking everything into consideration, it seems the Ravens have a much better chance at emerging victorious in this Sunday afternoon meeting.

The Giants surely possess the capabilities of upsetting a far better ballclub. I mean, they did so when they faced the Seahawks in Week 13, right?

But given how the last few weeks have gone for either team, it’s safe to say the Ravens are on a roll and certainly will be able to oust the Giants by more than 10 points. Their defense shouldn’t have an issue containing a Giants offense that’s 31st in both scoring and total yards while the offense should be able to do just enough against Big Blue’s defense.

Baltimore is the more talented team in the matchup, and if the Giants lost by 14 to Cleveland at home, then I can imagine the same type of outcome should occur on the road against the Ravens.

Not to mention, the aforementioned Giants injuries could indeed alter the final score, so that’s another thing to think about.

Giants-Ravens Total Pick: Hammer the Under at all Costs

As I’ve said before, any game featuring a strong Giants defense and weak Giants offense will come with a fairly low total. With that said, the DraftKings Sportsbook oddsmakers had reason to set this matchup’s over-under to 44.0, and you should definitely open your wallet for the under.

The Giants offense is 31st in scoring with a measly 17.4 points per game while the defense is ninth with 22.2 average points allowed. The Ravens defense is even stronger when it comes to that statistic, allowing 20.5 points per game.

There are a number of present factors that point to the total potentially sitting under 44.0. For the over to hit, the Ravens may need to score over 30 points, and I just can’t see the Giants allowing that (it has just twice this season and not since Week 5).

Each of the Giants’ last five games has hit the under, dating back to the Week 10 win over the Eagles.

Sign up with FanDuel Sportsbook here to get $1,000 in free bets.

Giants vs. Ravens Prediction: Take the Ravens to Win Outright

If I believe the Ravens will cover the 10.0-point spread, then I obviously believe they’ll win outright.

There’s definitely a risk that comes with betting the Ravens moneyline ($420 wager to earn a profit of $100), but Baltimore is just too talented and hot right now, while the Giants simply aren’t.

Big Blue has taken a step back in recent weeks, and amid the injury-related issues involving Daniel Jones (who will start on Sunday), things could continue to worsen, especially on the road against a well-coached Ravens team.

While the Giants have improved over the course of the year, they’re just no match for Baltimore at the moment. The Ravens employ the better offense, defense, and quarterback. Too many factors that favor Baltimore to win outright are present.

For what it’s worth, the Ravens have won each of their last nine games against NFC opponents and are 3-0 against the NFC East this year.

The Giants aren’t in the easiest situation at the moment. They’ve lost two straight, are playing from behind in the division, and are dealing with injury-related issues to multiple starters. Baltimore is just in a better spot right now and should be able to defeat this Giants team by more than one possession.

Click here to get a $250 first deposit match with PointsBet.