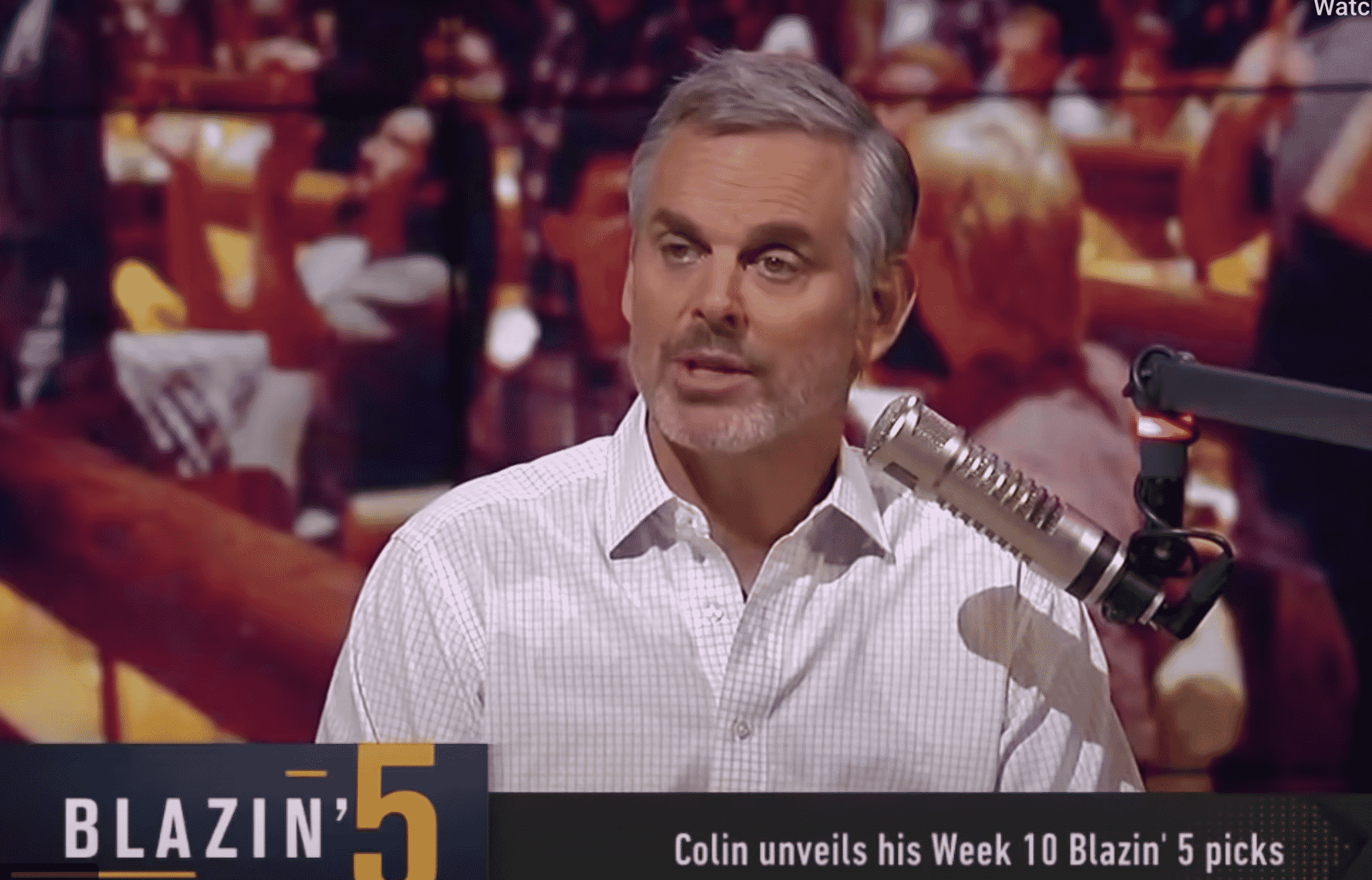 Colin Cowherd has released his “Blazing 5 Picks” ahead of a packed Week 10 slate of NFL games.

Colin Cowherd has made his picks and predictions for NFL Week 10 action. These are his against the spread picks.

Bet $1 to win $5o if the Eagles or Giants score at least one point on Sunday. Get in NJ right here. In PA? Get it here.

Tom Brady is 0-2 this season, but 6-1 against the rest of the league, and the Panthers -unfortunately for them- are in the latter group. Brady hasn’t had many 3+ interception games in his career, but in the rare instance it’s happened, his bounceback games have been huge. He’s 6-2 in those eight games with an outrageous 13-1 TD-Int ratio, while posting a 98.2 passer rating.

Tampa Bay’s defense has forced the most turnovers and is tied for first in the league in interceptions. Carolina’s lost four games in a row, which bodes well for a big Tampa win.

Click here to get the Eagles or Giants at 25-1 odds this Sunday with FanDuel Sportsbook right here.

Colin’s second pick of the week is one he loves. While the pick is to take the Giants’ spread at +3.5, he said he believes the Giants will win outright and it’s worth considering a moneyline bet.

While Philadelphia is coming off a bye week, the Eagles are just 1-3 following a bye week with Doug Pederson as their head coach.

The Giants have posted a league-best 5-1 record against the spread in their past six games. New York looked great against Washington a week ago. The Giants have forced the second-most turnovers in the league this season, which bodes well for them against a turnover machine.

Colin’s third pick of the week might draw some heat, but he’s taking the Dolphins against impressive rookie QB Justin Herbert, because he believes he’s identified a trend that’s plagued Los Angeles this season: bad coaching late in games.

The Chargers are 1-6 in one-possession games this season and their only wins have come against the Bengals and Jaguars, who are a combined 3-12-1.

Miami has an impressive rookie QB of their own in Tua Tagovailoa, who saw his completion percentage jump from 54.5% against the Rams at home in Week 8 to 71.4% at Arizona in Week 9. His passing yards jumped from 93 to 248 over that time and his passer rating increased roughly 50% from 80.3 to 122.3. The Dolphins offense has averaged over 28 points per game, making them a Top-10 offense in the NFL.

On the other side of the ball, the Dolphins have forced a turnover in 14 straight games dating back to a season ago.

Colin is a big believer in Jared Goff’s ability to stay upright in a clean pocket. Seattle’s defense has lacked a true pass rush all season, which is bound to lead to a big game from Goff. In his career, Goff is 24-5 when he’s sacked once or less in a game.

The Rams’ defense has been lights-out this season, allowing 19 points per game (2nd-best in the NFL). They’ve allowed just 291.9 yards per game, including 197.1 passing yards per game, both of which are second-best marks in the league. Their 4.74 yards per play allowed is the lowest allowed by any defense.

Aaron Donald has 12 sacks in 12 career games against Russell Wilson, the most he has against any team in the NFL. Add to that the fact that the Rams have won four of their last five games against Seattle, and Cowherd believes this is set up to be a Rams win.

Colin’s final pick of the week is a hedge against the national media narrative that the Saints are as dominant of a team as they were against the Buccaneers.

Cowherd believes the 49ers will bounce back with something to prove after getting embarrassed on national TV by the Green Bay Packers. San Francisco is 5-1 against the spread over the past two seasons when they have the rest advantage.

Kyle Shanahan teams have been great against New Orleans. When Shanahan has served as an offensive coordinator or head coach, he’s 5-2 against the Saints, with his offense averaging 33.6 points, 433.3 total yards, and 147.6 rushing yards per game.

Colin believes San Francisco will step up with their season’s hopes on thee line.