Nick Bosa, Josh Allen and the rest of the 2019 NFL Draft pool top the list that makes up the New York Jets big board.

Number three is a blessing and a curse. The New York Jets 2019 NFL Draft slot screams blessing, first and foremost. Selecting third in the most valued sports draft in the world is an automatic positive.

Such a positive also ups the ante.

Fortunately for Mike Maccagnan, his first round choices haven’t busted. He’s also enjoyed prime real estate within the top 10 more often than not, but choosing the right player still means the world. The lone occasion he didn’t choose in the top six in four seasons, 2016, Darron Lee was chosen at No. 20. Yes, the very same player who’s rumored to have one foot out of that Florham Park door.

Two positions of need scream desperation: offensive line and edge. This certainty configures the Jets big board in an extremely strict fashion. “Best available player” only works to a certain degree. If the notion truly meant everything, Los Angeles Chargers safety Derwin James would have been gone by pick five last spring.

It can be argued “best available player” has hurt New York in its football plight over the last several seasons. Drafting Big Cat when Muhammad Wilkerson and Sheldon Richardson were both in-house hilariously showcased one of the latter two attempting to play edge, just one of the areas that has remained bleak for a decade and a half.

The other is, of course, offensive line. Thanks to these harsh realities, it’s an impossibility for the 53-man depth chart to play to its full potential; never can it happen when the trenches rank among the league’s worst.

The New York Jets 2019 NFL Draft big board must come to the party with a heavy offensive line and edge focus in mind.

The top choice has to remain Nick Bosa.

The Quinnen Williams argument makes sense; he very well may be the best talent in the pool, but the fit is nearly as nonsensical as selecting a safety here.

Bosa fits like a glove. He’s a true plug-and-play edge man who can thrive in either the 3-4 or 4-3. His 17.5 sacks and 77 total tackles in 29 collegiate games raised his stock to a “future NFL stud” degree.

Perhaps his brother’s presence helped. Maybe the injury history is a major concern. Through it all, Bosa remains atop the Jets big board. He’s the most talent-filled edge player in the pool.

The 6-foot-4, 266-pound Bosa sports a 4.79 forty-yard to go along with a 33.5 vert. His raw physical attributes are freaky and his prototypical nature is too perfect to pass.

So why in the world would Bosa edge the man out?

Allen is a freak and can rush the passer and even get out into coverage with the best, but he lacks some of the uncoachable instincts Bosa seems to possess. He’s undisciplined at times and slow to diagnose plays.

In the end, flip a coin; the Jets can’t go wrong with either Bosa or Allen.

Even if Quinnen Williams is the most talented player in the pool, his 3-technique nature doesn’t jive with the Jets 53-man depth chart. He’s also not the worst fit. He just can’t leapfrog two stud edge players when the need is so dire.

Williams’s frame is nearly identical to Leonard Williams’s. Both play the 3-technique (the outer defensive tackle technique). Add the recently re-signed Henry Anderson into the mix and the fit just continues down the incorrect path.

If the Jets run the 3-4, Leo, Henry and Quinnen don’t fit at all. Who plays nose tackle? All three are of the lighter variety. Within any subpackage, only two can see the field. Who’s the odd man out? No defensive coach wants to see any of the three on the edge. Three-hundred-pound linemen aren’t supposed to be there at this level. The game is far too fast and the only reason Henry, Leo, Muhammad or Sheldon have attempted it was purely due to a desperate need.

Quinnen paired with either Henry or Leo in the interior rushing the passer is a dangerous proposition for offenses, but it just can’t fly when Bosa and Allen are available. The edge need has gone on long enough.

Speaking of needs, welcome to the offensive line discussion. If only an offensive tackle was worthy of a top-three selection; he’d be the guy to grab with Sam Darnold in the house.

Florida’s Jawaan Taylor is a surefire top-10 pick who’s creeping up as the draft nears. In a trade-down scenario, he’s the perfect target for the Jets. At No. 3, he can only grab the fourth spot on the big board.

Like Taylor, Jonah Williams fits into the trade-down scenario.

Much has been made about Williams’s future in the NFL. Is he tackle, a guard, or even a center? Nobody knows at the given moment. I do know this: he’s a football player.

Williams would serve as a Jets target if a deal is struck with the Denver Broncos (No. 10) or Washington Redskins (No. 15). 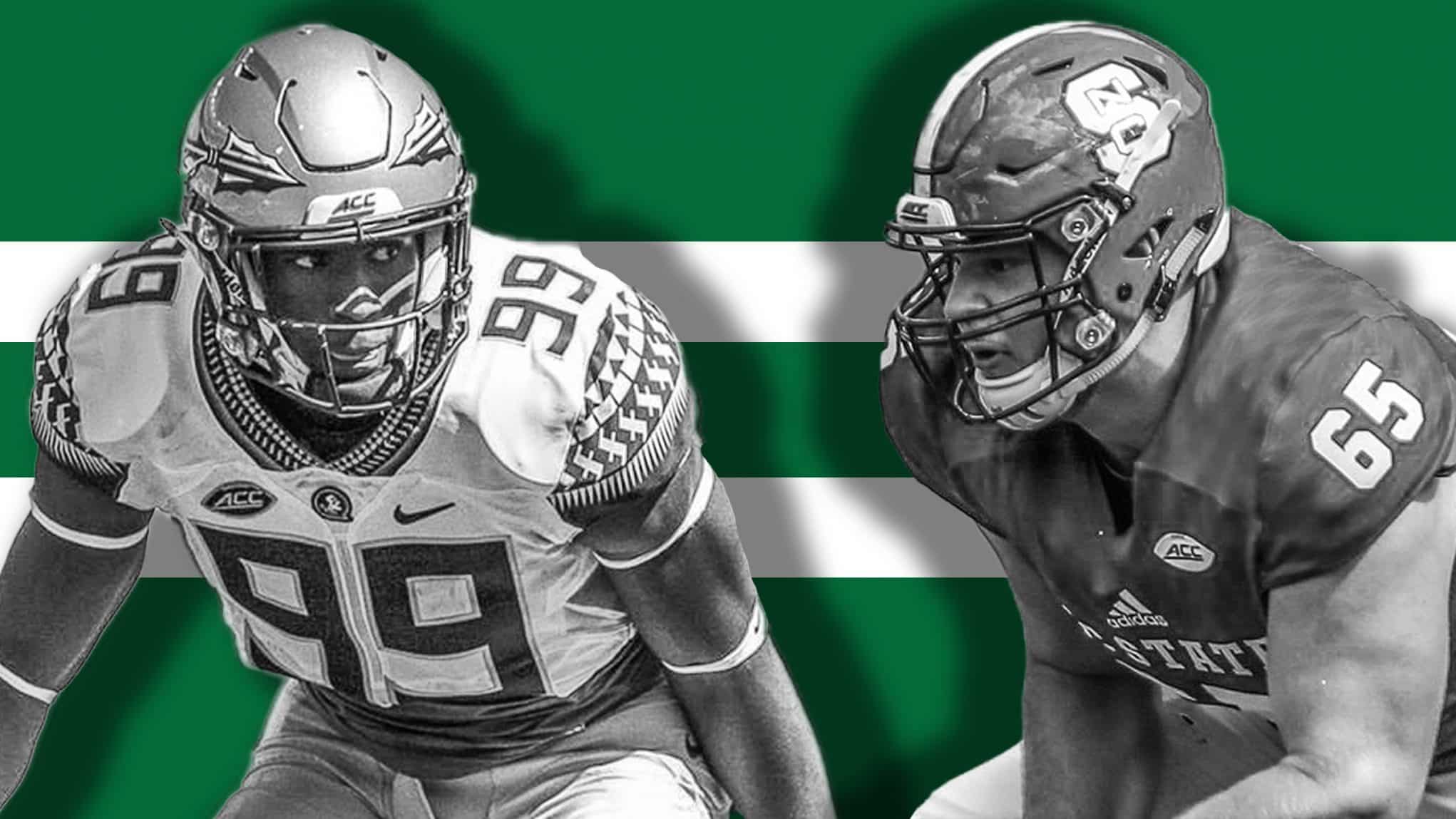 Throwing in the best center in the pool is a no-brainer—regardless of where he’s currently projected.

NC State’s Garrett Bradbury took a mid-round status and turned it into gold at the NFL Combine. His raw skills put every zone-rushing scheme offensive mind on notice. They all dreamed of his size and fluidity in space crushing defenders on the stretch.

Interestingly enough, some of Brian Burns’s supporters have the man as the No. 2 overall edge prospect behind Nick Bosa (ahead of Josh Allen). I can’t go that far yet he can’t be dismissed.

Burns is projected somewhere in the mid-first round and, much like the offensive linemen, fall into the trade-down target situation. He’s a thin, speedy edge rusher who gets to the outside quicker than anybody in the pool. A 4.53 forty-time will do that.

The goal must remain trade. The holes are still too aplenty and the draft assets are far too few. Finding a quarterback-hungry team to collect those assets and build a house on both sides of the football remains the priority.

It’s not easy. Nobody has ever claimed trading down is simple. If the Jets can’t get it done, the above big board is the path to big-bodied success.