David Ortiz has undergone a name change, haven’t you heard? Well, if you haven’t, Mike Francesa has you covered.

Ortiz deserves some credit here. Mike not only mistakes him for former teammate Pedro Martinez, he does it on more than one occasion. Ortiz stayed cool and didn’t bother correcting Mike over the mistake. He either didn’t mind or was fuming and chose not to express his feelings on the air.

For now, let’s assume it was the former of the two sentiments.

No one is perfect, not even the Sports Pope but this was bad, mostly for the fact that it happened more than once just seconds apart from each other. Mike, we know you’re leaving WFAN in December, but look alive out there! Ortiz took time out of his schedule to spend time on your show, the least you can do is remember his name.

Surely, it was honest mistake but that doesn’t stop it from being any less comical.

NEXT: Antonio Cromartie to Have 14th Child 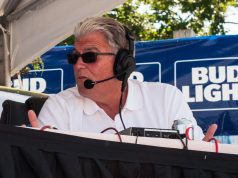