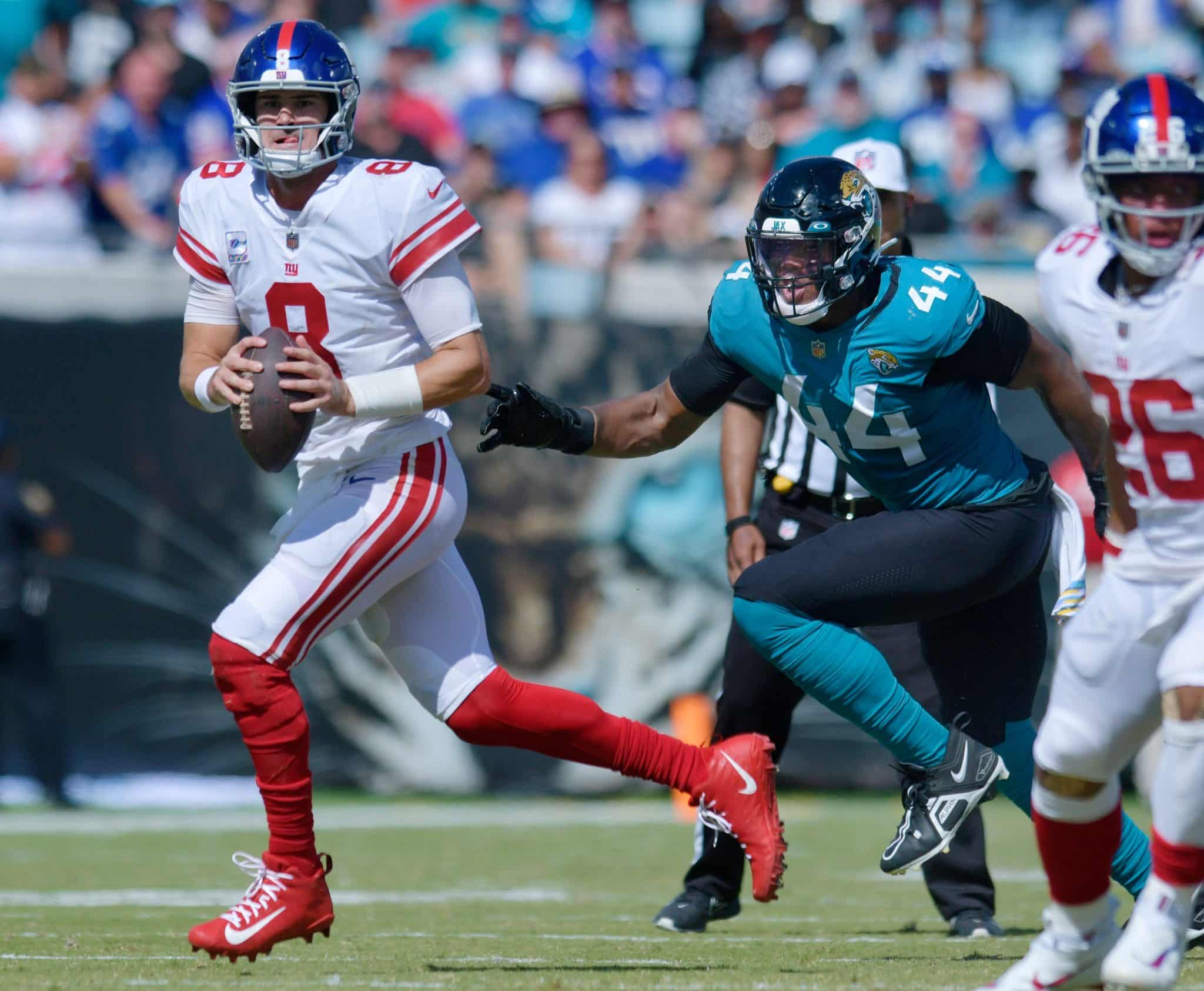 Quick, rewind yourself and your thoughts back to July. As the Giants began training camp with quarterback Daniel Jones, did you think he’d be with Big Blue beyond 2022? My guess would be that a vast majority felt he wouldn’t be. But maybe Danny Dimes will stay with New York after all.

Jones has continued to look more comfortable each week. That’s shown up in the Giants’ record. They’re 6-1 ahead of a Week 8 showdown vs. the Seattle Seahawks on the road. New York hasn’t made it easy, though. They’re the first team to have its first seven games all decided by one possession. Within those six wins are five fourth-quarter comebacks, too.

Prior to this season, the Giants’ new front-office regime decided against picking up the fifth-year option on Jones’ rookie contract. That move was mostly applauded, and it set up a crucial season for the signal-caller’s future. So far, he’s answered the bell.

Jones has racked up 1,223 passing yards to go along with six touchdowns and two interceptions while completing 66.7% of his passes. He’s also paired this with 343 rushing yards and three touchdowns. That includes his first performance of 100-plus rushing yards, which happened in Week 7 vs. the Jaguars.

His Quarterback Rating (as calculated by Pro-Football-Reference) is 90.8. That’s not only on track to be a new career-high mark, but it’s the best that number has been since his rookie season (87.7 in 13 games).

Not picking up his option over the offseason was a smart move at the time. But now, the Giants find themselves in a situation they might not have been expecting. Unless New York’s performance completely bottoms out in the next few weeks, the likelihood of Big Blue nabbing a top quarterback in this spring’s NFL Draft may not be possible.

So, unless they’re convinced Jones is their guy, we could see him back at MetLife Stadium in another short-term situation. Pro Football Focus listed out the three options if the Giants aren’t ready to commit to their current quarterback for multiple seasons (all compensation numbers are projected):

PFF’s league source said a transition tag for Jones would be the Giants’ “best course of action” in this situation. That’d be a huge raise for the 25-year-old. His cap hit this season is just over $8 million, per Spotrac.

On the surface, this doesn’t seem like a huge deal. Applying the transition tag would also be a good way to evaluate Jones for one more year before making a long-term commitment. But, if you had to name the Giants’ two best offensive players so far this year, who would you pair with Jones?

New York can’t use a franchise tag for Barkley if it’s used on Jones. This leaves the Giants in an even stickier contract situation than before. If the organization wants to retain both players beyond 2022, they’d have to commit to one of them in a longer-term scenario.

Some tough decisions are ahead for general manager Joe Schoen and the Giants. But based on where this organization was just two or three months ago, this is a good problem to have.