The second-biggest Giants surprise after this 2-0 start?

They are actually using their tight ends.

Most figured the position would be an afterthought in head coach Brian Daboll’s offense. The Giants’ willingness to start rookie fourth-rounder Daniel Bellinger from the jump backed that sentiment up. As did the lack of urgency to make move for a proven weapon, even after the release of veterans Jordan Akins and Ricky Seals-Jones.

But two weeks in, it seems the tight end spot could be more valuable for the offense than initially believed.

Red-zone threats? Quarterback Daniel Jones hasn’t exactly lit up defenses amid the 2-0 start — he’s thrown for only 364 yards and three touchdowns. But it’s worth noting how much the tight ends have contributed, at least in the art of scoring. Tight ends have actually caught two of Jones’ three touchdowns, including (tight end/fullback) Chris Myarick in Week 1 (prior to the go-ahead two-point conversion to beat Tennessee) and Bellinger in Week 2 (the team’s lone touchdown in a 19-16 win over the Panthers).

Even reserve tight end Tanner Hudson, who has started one game in four seasons, recorded a pair of catches on three targets for 22 yards Sunday.

With uncertainties regarding receivers Kenny Golladay (two snaps in Week 2), Kadarius Toney (seven snaps in Week 1, two catches for zero yards total on the season), and rookie Wan’Dale Robinson (already dealing with a knee injury), the tight ends could assume legitimate roles down the stretch and further develop opportunistic connections with Jones.

The touchdown. It was Bellinger’s first career catch on Sunday, and he made a great play to fight for the pylon for a 16-yard score. The third-quarter touchdown (and ensuing PAT from placekicker Graham Gano) tied the game at 13.

Let’s break it down: 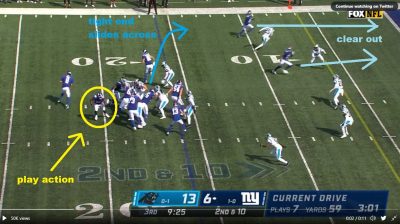 Giants offensive coordinator and play-caller Mike Kafka sent Golladay and receiver Richie James (off jet motion) on dummy routes toward the end zone. They’re not running legitimate routes nor are legitimate reads for Jones — the jobs of Golladay and James are to clear space against Carolina’s man coverage.

Bellinger is then able to find space in the left flat coming across the formation. It’s a simple dump-off for Jones and Bellinger uses that great athleticism to beat Panthers safety Jeremy Chinn to the pylon.

Hudson’s growth. There’s a chance we could see more of Hudson as the year goes on, especially if Daboll values him over certain receivers when game planning against specific defenses.

Hudson, who the Giants signed in August, certainly contributed Sunday, and Bellinger sees the true value of having the 27-year-old on the roster.

“I met [Hudson] when we went to (NFL tight end camp) ‘Tight End U,'” Bellinger said following Sunday’s win. “I’ve known him for a while now and I think he’s a good leader. He comes in and he’s not too stressed — he’s focused and locked in on what he has to do. And he’s a smart guy, too, so he helps our team a lot.”