The Jets have an improved defense. That we can say with some conviction, even after this ugly season-opening loss to the Ravens in the slop.

But the offense? It was cover-your-eyes bad in Sunday’s 24-9 defeat at MetLife Stadium. The rain didn’t help, of course. But that will go away. And yes, quarterback Zach Wilson will return at some point. But we still don’t know what exactly he is. And in the meantime Joe Flacco will remain a statue in the pocket, protected by an offensive line that is banged-up and looked brutal at times.

The Jets carried plenty of optimism into this season, although they have been gradually leaking oil ever since the injuries to tackle Mekhi Becton and Wilson this summer. But it is not hard to see how things could get off the rails following this effort. Especially with the Browns (next week’s opponent), Steelers (Week 4) and Dolphins (Week 5) all looking good (plus the reigning AFC champion Bengals in Week 3). If you cannot score points in the NFL, you cannot win.

The Jets contained Ravens quarterback Lamar Jackson about as well as could be expected for most of the first three quarters. Linebacker Kwon Alexander flashed, rookie cornerback Sauce Gardner made plays, the pass rush pressured Jackson and end Jermaine Johnson had his first sack. But the unit was bound to wear down eventually if the offense was unable to do its part. Which is what happened. Baltimore had 92 yards in the first half, then racked up 143 in the third quarter with two scores to turn a nip-and-tuck one-score game into a runaway.

The ugly offensive numbers. Flacco was 37-of-59 for 307 yards, a late touchdown pass and an interception. He was sacked three times and pressured countless others. The Jets’ line was short-handed after veteran Duane Brown went on IR, but Flacco’s lack of mobility appeared to be an issue. Running back Michael Carter had a good day on the ground, but the receiving corps left plenty to be desired. Corey Davis had a big drop in the first quarter and Lawrence Cager slipped on the interception, which set up Baltimore’s first score. Oh, and Carter dropped an easy touchdown pass in garbage time.

The jarring stat: Two-of-14 on third down. That’s not going to cut it. The Jets finished with 378 yards of offense, but 180 of them came after the Ravens took a three-score lead.

Defense gives out. Flacco’s pick and a shanked punt by Braden Mann gifted the Ravens good field position for 10 of their points. But a big pass interference call on safety Lamarcus Joyner flipped the field to set up Baltimore’s first touchdown right before halftime. And the Jets’ backs broke on Jackson’s 55-yard touchdown pass to wideout Rashad Bateman a snap after several defenders had a shot at recovering a fumble and Baltimore managed to fall on the ball. There were positives and the unit is undoubtedly improved. But the Jets are not good enough yet to mask for an anemic offense. Which they appear to have again.

Tough start for Breece Hall. The rookie back lost a fumble to kill the Jets’ last chance to stay in the game and managed just 61 yards of offense on 12 touches. First-round pick Garrett Wilson had a nifty catch-and-run in the first half, evading a few tacklers, and finished with four catches for 42 yards.

Mike White? If this continues in Cleveland next week, head coach Robert Saleh may have no choice. You can’t have the season rendered over before Wilson even takes the field.

Denzel Mims inactive. The wideout was a healthy scratch after his preseason trade request. You have to wonder how much longer general manager Joe Douglas will hold onto him without a resolution. Demanding a big return for a guy who isn’t active seems unlikely to pay off. And there’s a long way to go if they plan to take this all the way to the trade deadline before waiving Mims.

Greg Zuerlein. He missed a 45-yard field goal early and then an extra point late. Will the Jets ever be stable at kicker? 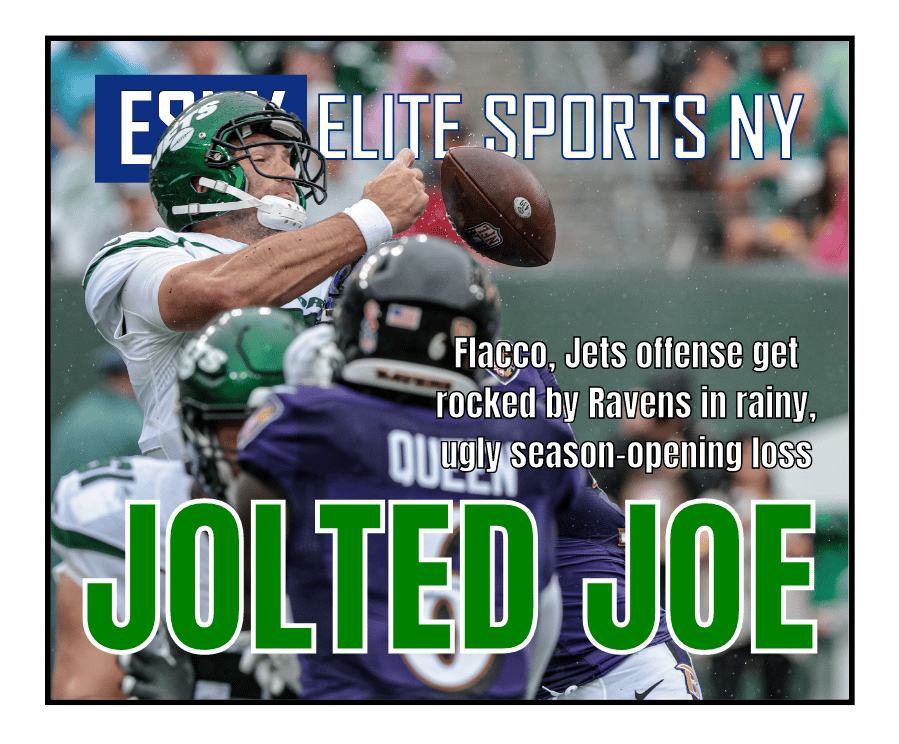