Charles Cross might as well start looking at apartments in Hoboken at this point.

The Mississippi State offensive tackle has become the trendy draft name tied to the Giants this week. NFL Network’s Daniel Jeremiah said the Big Blue braintrust had fallen in love with Cross and now Sports Illustrated’s Albert Breer is projecting him to the Giants at No. 5 as well — along with some attention-grabbing anonymous hype.

[W]hen I tell you I’ve heard them connected to Mississippi State tackle Charles Cross, you might think that’d be a reach at No. 5. I’m here to tell you it wouldn’t be.

One executive told me this week that he believes Cross is the best player in the draft, regardless of position. Another wouldn’t go quite that far, but could see how one of his peers reached that conclusion: “You could argue he’s the best player, no doubt. He starts to bore you, it’s so easy for him. … The way he redirects, the way he plants his outside foot and explodes, no one beats him with speed, no one crosses his face and beats him, he just doesn’t lose much.”

Everyone knows the Giants are going to take an offensive lineman with one of their top-7 picks. The expectation has just been they’d end up with N.C. State’s Ikem Ekwonu or Alabama’s Evan Neal, because those players have been perceived to be superior to Cross. But that now may be changing.

Also of note from Breer’s mini-mock (he only projected the top-12 picks): Ekwonu and Neal were off the board before the Giants even picked at No. 5. So they may have no choice but to take Cross fifth overall.

Like everyone else in the NFL world, Breer believes the Giants want to trade one of their top-10 picks to accumulate extra draft capital. And ideally that haul would include another 2023 first-round pick. But it may be easier said than done moving down from No. 7, he said. If general manager Joe Schoen is forced to stand pat, Breer expects the Giants will just focus on a position of need. He has them taking Oregon defensive end Kayvon Thibodeaux at No. 7, which would mean the team’s reported concerns about Thibodeaux have been assuaged. 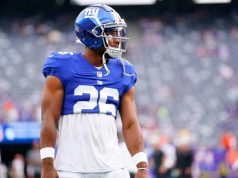