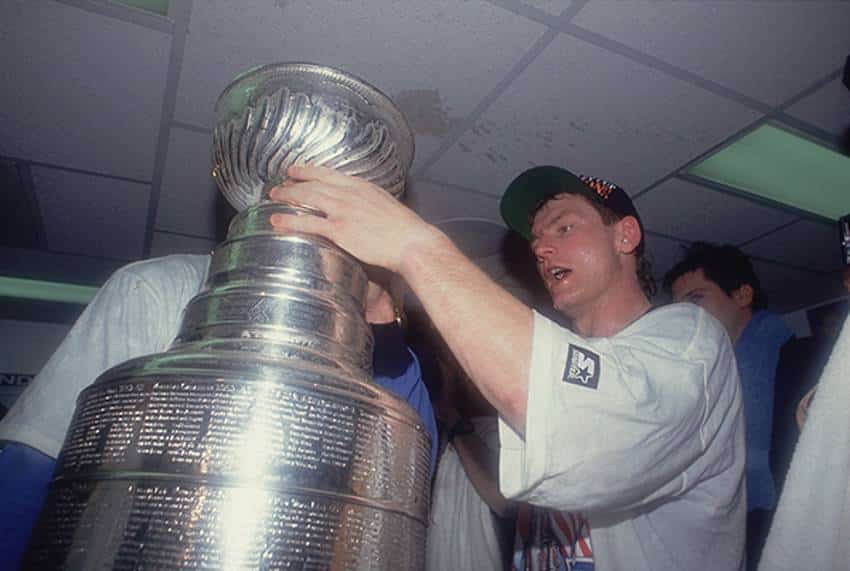 Why Steve Larmer is My Favorite player.

For New York Rangers fans, 1994 was an incredible year. The team had everything they needed to win on the ice, but they had a bumpy road to the Stanley Cup Final. If not for a historic guarantee from Mark Messier that he backed up in iconic fashion, there may not have been a parade.

But when the Rangers did win the Cup, ending their decades-long drought, who did Mike Keenan leave on the ice for the closing minute? Messier and Steve Larmer.

The Rangers acquired Larmer in what amounted to a three-team deal between the Hartford Whalers and Chicago Blackhawks. Larmer’s historic games played streak ended when he demanded the Blackhawks move him.

The second half of the trades ended up with the Rangers sending James Patrick and Darren Turcotte to Hartford for Larmer, Nick Kypreos, Barry Richter and a sixth-round pick on Nov. 2, 1993.

That season, Larmer scored 21 goals with 39 assists in 68 regular season games for the Rangers. He then added 16 points (9 goals, 7 assists) in 23 postseason games to help the Rangers win it all.

Outside New York, most sports fans remember June 17, 1994 for OJ Simpson’s freeway drive in the white Bronco more than the parade for the Rangers (or the Knicks NBA Finals game). But Rangers fans will forever remember that roster.

Watching Larmer win the Cup was an emotional moment for me, because he had been my favorite player for years before joining the Rangers.

I can’t remember the year, but I was young. Maybe five or six. My father was running PR for a hospital in the Chicago suburbs and a number of Blackhawks players made an appearance for a blood drive. They signed autographs, shook hands — the usual publicity moment for guys back then.

I was young, but I distinctly remember how kind Larmer was. He signed a photo card for me that day, and that interaction made me not only a hockey fan, but a Larmer fan.

For fans who are younger than their mid-40s, Larmer was comparable to Marian Hossa. He played every inch of the ice well. He was strong with the puck and impossible to take the puck away from; and he had a lethal slapper that he happily unleashed from anywhere on the ice.

His numbers are good enough to warrant a spot in the Hockey Hall of Fame. There are only three* retired right wings in history to average 1.0 point per game in more than 1,000 games played that isn’t in the Hall already. (* – Jaromir Jagr still hasn’t officially retired.)

Larmer wasn’t the face of the franchise. That was Denis Savard in the 1980s and then Jeremy Roenick or Chris Chelios in the early 1990s. But he was a cornerstone player who brought it every night.

If you follow me on Twitter, you’ll frequently notice me tweeting #retire28 because the Blackhawks still haven’t retired his jersey. When he retired, he was at or near the top in almost every offensive category in the history of the Original Six franchise; the jersey retirement — like a Hall of Fame induction — is well overdue.

His on-ice performances for the Blackhawks, Rangers and Canada (especially in the 1991 Canada Cup where he was arguably the best player on a roster that included Wayne Gretzky) made him a legend.

But, to me, Larmer was the guy who signed that autograph at Elmhurst Hospital in the mid-80s and was kind to a young kid looking up to a professional athlete.