As we celebrate May The Fourth, who is your favorite New York sports villain to hate?

Even though Brian Cashman lovingly referred to his organization as “the evil empire” when the Yankees signed Gerrit Cole, we’re going to take a different spin on May the Fourth.

Who is the biggest villain (the Dark Side, if you will) against New York teams in the last 30 years?

Who is New York’s “Evil Empire” in the last 30 years?#MayThe4th

We’re going to keep this conversation at 30 years because, well, most sports fans today don’t remember anything pre-Michael Jordan. So we’ll start right there with the GOAT.

Jordan won six NBA championships at the expense of Patrick Ewing’s Knicks teams. Ewing did get the Knicks to the 1994 NBA Finals, but Hakeem Olajuwon was waiting for him. Jordan tormented the Knicks and always played well at Madison Square Garden.

If there was a sports moment that was close to blowing up a planet with a Death Star, it would be this:

There are two really strong MLB candidates for best villain. While David Ortiz’s postseason heroics hurt, let’s not sell short that Chipper Jones named his son after Shea Stadium. “Larry” to Mets fans, Jones should have simply written “Thank you, Mets” on his plaque in Cooperstown.

The second GOAT in our poll, Brady laughed his way through two decades of division titles at the expense of the Jets. While the Jets’ 2021 draft may provide A New Hope (you’re welcome), it took Brady leaving for the NFC to open the door for this to be a conversation. 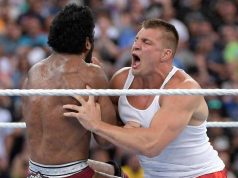