The top prospect is expected to make his NHL debut within the next week.

The New York Rangers have been making some noise. After a bumpy start to the season, they’ve looked much better and are doing a good deal of winning.

They’ve overcome injury issues and are getting healthy: Phillip Di Giuseppe and Brett Howden are the only players who have been out of the lineup after being placed on the COVID-19 protocol list, but Di Giuseppe has come off and should make his return quite soon.

Jack Johnson is out for the season, but he wouldn’t have gotten much playing time anyway.

The entire coaching staff was placed on the protocol list, but assistant coaches Greg Brown and Jacques Martin have come off and David Quinn is expected to make the trip to Washington for Sunday’s matinee game against the Capitals.

Kris Knoblauch has done a terrific job as the acting head coach in Quinn’s stead.

The Rangers have enjoyed winning, which includes beating up on the Philadelphia Flyers. They shut out the Flyers 9-0 and beat them again 8-3 about 10 days later. The Blueshirts have the Flyers to thank for getting a cold Mika Zibanejad red-hot.

Zibanejad recorded six points and scored a hat-trick in each of these games and is catching fire just in time for a second-half playoff push.

They are coming off an unfortunate loss to the Flyers, but the Rangers, as a whole, have been great.

It’s unlikely that the Rangers will be particularly active at the trade deadline and their focus will be to try their hardest to earn a playoff spot while continuing to develop their youngsters.

No matter how well the Rangers do this season, we can’t forget that this is a rebuilding team. This brings us to the focal point of this piece: Vitaly Kravtsov.

A top prospect in the organization, Kravtsov was selected ninth overall by the Rangers in the 2018 NHL draft. He signed his entry-level contract on April 15, 2019 and was invited to the 2019 training camp.

To Kravtsov’s displeasure, the Rangers assigned him to the AHL, where he logged just one assist in five games with the Hartford Wolf Pack. After a tumultuous and rocky stretch, Kravtsov opted to return to the KHL to continue his development.

The Rangers loaned him to his former club, Traktor Chelyabinsk, where he registered three points in 11 games. His unspectacular play warranted a demotion to Traktor’s VHL affiliate, Chelmet.

He recorded two assists in three games there, but the Rangers ended his loan prematurely and sent him back to Hartford. He recorded 14 points in 34 games there.

In August 2020, Kravtsov signed a one-year extension with Traktor, and played the entire 2020-21 season with them. He scored 16 goals and 24 points in 49 regular season games and scored two goals and four points in five playoff games.

It seems like Kravtsov has left any drama or hard feelings he had in the past and has worked on improving his game to take the next step.

He looked solid in Russia and did enough to impress the Rangers, who clearly believe he’s ready to be a factor at the NHL level.

Kravtsov has joined the Rangers and has been practicing with them. It isn’t entirely clear when the 21-year-old right winger will make his debut, but it looks like it might be very soon.

With Di Giuseppe set to be cleared to see game action soon, Howden following suit, and the team carrying three goaltenders, adding an extra player was going to be difficult.

For that reason, the Rangers felt they had to move someone, and that’s what they did. On Saturday evening, they sent left winger Brendan Lemieux to the Los Angeles Kings in exchange for a fourth-round pick in the 2021 NHL draft.

This was a smart move to dump salary and open up a spot to accommodate more forwards once Kravtsov joins the lineup.

Speaking of the lineup, what exactly should it look like once Kravtsov does make his debut? One lineup in particular gives the Rangers the best chance at winning night in and night out, and this is it:

With Lemieux gone, the two forwards left out would become Brett Howden and Kevin Rooney.

Howden and Rooney are the team’s two worst forwards and practically nothing can justify starting them over any of the three guys listed in the above lineup’s fourth line. 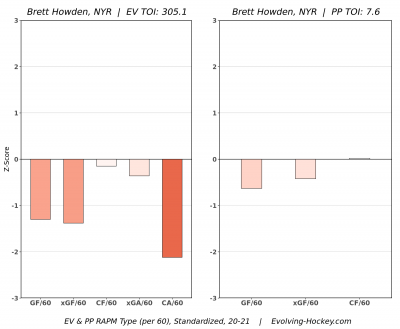 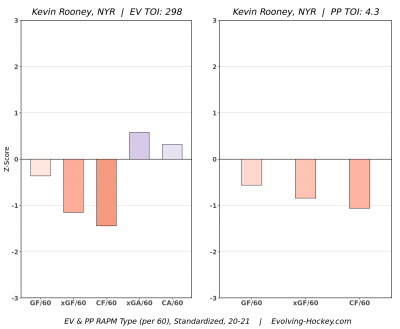 He might not last in that spot, but easing Kravtsov into the NHL as well as the lineup on the “diaper line” is the best decision.

The “KZB line” has been on fire, plus placing Kravtsov on the top line would put far too much pressure on the rookie.

Kaapo Kakko has shown that he performs much better on the second line than with his fellow kids, so it isn’t a good idea to take him off.

Having a promising youngster with a high-ceiling play on the fourth line doesn’t make much sense and he should be playing alongside guys with those same characteristics. Ergo, the third line is best for Kravtsov.

The coaches have shown that they prefer playing Julien Gauthier on the third line than the fourth, which explains why he’s been benched so often this season.

However, it’s quite easy to argue that Gauthier hasn’t been nearly as impactful on the fourth line because of his linemates. If he plays alongside much better players such as Di Giuseppe and Colin Blackwell, he might do a lot better.

That potential line makes too much sense, especially considering the fact that Blackwell has experience playing center.

Unfortunately, the chances of Quinn rolling with this particular lineup are slim. He holds Howden and Rooney in high regard, particularly as two-way forwards and valuable penalty killers.

Benching them regularly for guys like Di Giuseppe and Gauthier likely isn’t something he’d feel comfortable doing, whether or not it’s the right decision.

Whatever ends up happening, it will be interesting to see how Quinn arranges his forwards, what line Kravtsov will begin his career on, and if the youngster will end up staying there or moving around.