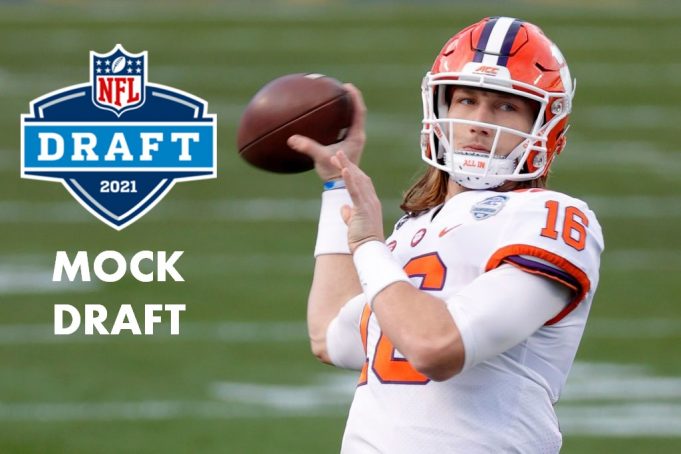 Which college stars will end up coming to New York to join the Giants and Jets? Let’s look ahead to the 2021 NFL Draft!

We’re one week from the Super Bowl, which (unfortunately) means Giants and Jets fans are already looking ahead to the 2021 NFL Draft.

The 2021 NFL Draft begins on Thursday, April 29 and runs through Saturday, May 1. With Clemson quarterback Trevor Lawrence being the assumed number one overall pick to the Jacksonville Jaguars and new head coach Urban Meyer, the eyes of the football nation turn to the Jets, who own the second overall pick.

What we don’t know yet is whether or not the Jets will make the second pick. Will they trade down to add more picks? They already have two in the first round. Or will they swing big for a franchise quarterback, trading for Deshaun Watson or Matthew Stafford?

While we won’t assume or project any trades, it’s worth taking some time to consider how the 2021 NFL Draft might play out.

With that, let’s jump into a four-round mock draft.

This has felt like a fait accompli for more than a year. Lawrence is arguably the most hyped quarterback to enter the draft since Andrew Luck, and he’ll be the centerpiece of Urban Meyer’s new look in Jacksonville. Can they build a winner around him? They certainly have the picks to make a quick difference.

The Jets were roundly blasted for winning enough to lose out on Lawrence. And this pick may end up in the hands of a team that is looking to move a franchise quarterback. But, if the Jets stay put, receiver is a significant need. Smith, the Heisman Trophy winner, would be an incredible addition to the Jets’ offense.

Analysts will argue forever about whether or not Chase or Smith should be the first receiver off the board, but Miami (again – if they’re still picking third) will be happy to have either one. They need a big play target and they should be able to land one here.

Atlanta has issues all over their defense and could look to select an impact player and every level on that side of the ball. They may also consider an heir apparent to Matt Ryan at quarterback. But the best corner in the draft is a smart play. Remember: Atlanta selected Deion Sanders fifth overall 32 years ago.

The picture of Joey Burrow getting carted off the field last year was the absolute worst case scenario for the Bengals. So they’ll look to protect him at all costs moving forward. Sewell is the best tackle in a really good class at that position, so this is a smart choice.

What the hell will the Eagles look like by the time of the draft? New coach. New franchise quarterback? New offense? What we do know is they need to protect their quarterback, whomever it is. So taking a big tackle like Darrisaw makes sense.

They’re shopping Matthew Stafford apparently, which means it’s time for a new era to begin in Detroit. They could have their choice of the second tier of quarterbacks in the draft after Lawrence. We’re banking on them going with the talented Fields, who was tremendous at Ohio State.

Carolina needs a new face of the franchise, and will likely address it early like Detroit. Wilson and Fields appear to be swapped out between QB2 and QB3 on most draft boards. So the players we have here at picks seven and eight could flip.

Denver has to know what the future holds for Von Miller and make a decision about their quarterback position before they can make a choice in the draft. But knowing how Dallas covets an elite corner will make taking Farley a need-filling move here for the Broncos.

If the top two corners are off the board, the Cowboys would be wide to take the best linebacker in the draft. Parsons is the complete package and would fill an enormous need for Dallas. Considering how poorly their defense played last year, drafting a leader makes too much sense here.

The Giants could go with an edge rusher here, but the incredible talent of Waddle might be too hard to pass on. Waddle is an electric receiver who could immediately change the passing game for the Giants. New York fans would be thrilled to have a talent like this join the offense.

Will they trade for a quarterback? Maybe. If they don’t, Lance is your next quarterback on the big board. He’s an intriguing talent coming from North Dakota State but it’s hard not to fall in love with his tape. We’ll see how they start another build in the Bay.

After their rookie quarterback broke records for passing in 2020, adding an elite tight end here would be a fun move for the Chargers. Adding an option like Pitts to that offense would make them a team to watch next year, especially knowing they have to score in the same division as the Chiefs.

How long do we keep believing in Kirk Cousins? What is clear is Minnesota needs to identify his heir, and Jones would be a solid choice here. This will be a fascinating pick to watch because most people believe the Patriots are considering a quarterback with the next pick.

So the top five quarterbacks are off the board already. What do you do in New England? Maybe you trade for Stafford. Maybe you sign or trade for another veteran. Or (as we project here) they might wait to take a quarterback later in the draft. Paye is the best edge rusher in this draft and would fill a need for the Patriots.

The Cardinals have plenty of needs on both sides of the ball. Horn is an exceptional corner who would help their secondary tremendously. They might also look to add to their offensive line depth here as well.

This feels almost too good to be true. John Gruden getting together with a disruptive defensive lineman from an elite program? Barmore made himself a lot of money in the National Championship Game and stands to be an impact player wherever he lands.

Miami’s second pick of the first round addresses another glaring weakness. Selecting an impact linebacker at 18 would be great value for Miami, who need this draft class to hit for them to turn around quickly.

They don’t have a firm answer at quarterback, but they need to protect their signal caller. They might think tackle here, but Vera-Tucker is a nasty interior offensive lineman who would work well with Ron Rivera’s mentality.

The Bears have had a glaring need at tackle for years, so a deep draft class this year works out perfectly for them. Slater has the potential to be a long-term answer for Chicago’s offensive line. The Bears might be desperate enough to reach for a quarterback, but they need to protect whomever is under center.

Again, a team that’s in the market for a quarterback that might trade for one… or wait. At this point they would be reaching to take Kyle Trask. But Rousseau is a disruptive force on the edge that would help their defense immediately.

Oweh is a guy who will look like a legend in workouts. He’s athletic and gets off the ball really well. Tennessee will have a number or positions they could address here but Oweh would be a dangerous player on their roster.

If Collins is available here, Robert Saleh might personally run the card to the commissioner himself. This is a prospect who looks the part of a dominant outside linebacker for the next decade. As Saleh builds the Jets in his identity, this is the kind of player he should want.

How much longer does Big Ben hang around? And what are they doing with the backup spot? Either way, down the stretch they couldn’t run the ball effectively and Roethlisberger got hit far too often. Jenkins would be a prototypical Steelers tackle pick.

Urban Meyer continues looking to overhaul his roster here with his second pick, and he goes to the edge. This kid has a motor and played big for Georgia. Jacksonville needs athletic talent all over their roster and this is the kind of player that helps immediately.

The Browns took a big step forward this year but saw that they aren’t there yet in the playoffs. Surratt was a consistent player at North Carolina who would come in and make plays all over the field for Cleveland.

Hollywood Brown was the only receiver worth a dime on the Ravens’ roster last year, and he clearly can’t do it all by himself. If Lamar Jackson is going to stick at quarterback, he needs help in the passing game; he can’t win every game with his legs. Marshall would be a big addition to the offense.

We assume Drew Brees is moving on, so the Saints are a pick that might be interesting for Trask. But they’ve got at least one quarterback they believe in on the roster for next year and have issues in their secondary. Moehring is the best safety in this class.

If you watched them lose the NFC Championship Game you know their secondary has at least one issue. Robinson is climbing draft boards and would come in to help that situation right away. But if Aaron Rodgers is gone, who knows what happens here.

Buffalo is *this close* to being elite, but have a few issues they still need to address. Roche is having a dominant week of practice at the Senior Bowl and could surprise by coming off the board before this selection.

Tampa could have some decisions to make after the Super Bowl. Nixon is an enormous player who could come in and replace one of the veterans on their defensive front. At the end of the round they might be open to moving back to add options later as well.

With news that tackle Eric Fisher tore his Achilles in the AFC championship game, what was a need becomes even greater for the most dangerous offense in football. Cosmi would bring some nasty to the Chiefs line and would be a solid addition to their line.