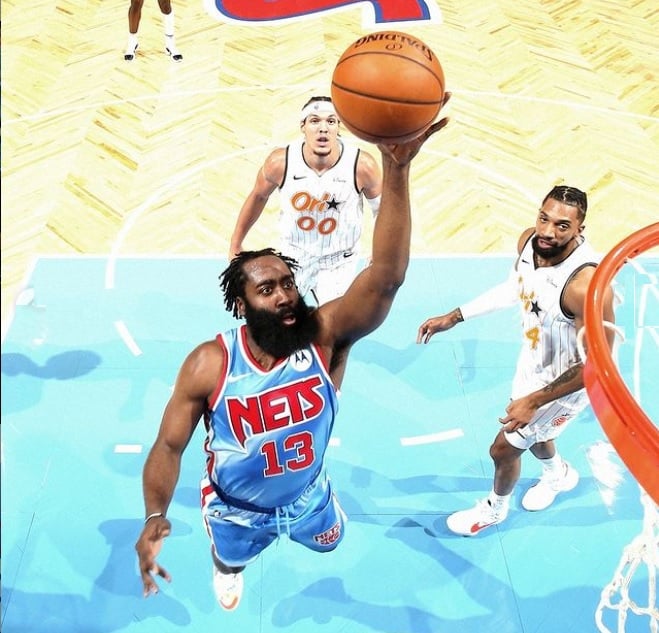 James Harden had a huge night. Was it the best debut in Nets history?

On Saturday night, one of the most anticipated debuts in the history of the New Jersey/Brooklyn Nets took place.

James Harden posted a strong triple-double: 32 points, 14 assists and 12 rebounds in the Nets’ 122-115 win over the Orlando Magic. The performance made Harden the first player in NBA history to record a 30-point triple-double in his debut with a team.

That historic achievement got us wondering: who had the best debut in the history of the Nets?

Here are a few candidates worthy of comparing to Harden’s magical night.

Julius Erving made his debut with the Nets against Indiana Pacers in the ABA. The 23-year-old “Dr. J” came in with high expectations; his rights were sold to the Nets in one of the most significant deals in ABA history.

Did the Doctor pay off the hype? Absolutely!

Dr. J’s first night with the Nets saw him go for 42 points on 19 of 36 shooting and four free throws without a miss. He added 18 rebounds, three assists and five blocked shots in a monster night.

Coleman wasn’t acquired via trade, but his Nets debut came with a lot of hype. The Nets selected Coleman out of Syracuse with the number one overall pick in the 1990 NBA Draft.

Coleman, like Dr. J, made his Nets debut against the Pacers. Unlike Erving, Coleman didn’t start the game, however.

He came off the bench to play 25 minutes and contribute 11 points, 12 rebounds, two assists, two steals and three blocks. The Nets lost the game by 19 – the same amount as Erving’s debut against Indy.

After the Nets acquired Petrović from Portland in a three-team deal, he joined the team for a home game against Magic Johnson and the Los Angeles Lakers.

Petrović came off the bench for the Nets and scored 14 points, two rebounds, three assists and two steals. The Nets lost the game by five.

Kidd was acquired in one of the biggest trades in Nets history during the summer of 2001.

Like Erving and Coleman, Kidd made his Nets debut against the Pacers. Unlike the other two, Kidd’s Nets won the game.

Kidd’s line in his Nets debut was typical for him during his time in Jersey: 14 points, 10 rebounds, nine assists, four steals and one block.

A trade that will be remembered as an incredible debacle at the time brought an incredible amount of hype to Brooklyn. Garnett and Pierce made their debuts together against the Kyrie Irving-led Cavs during the Lebron-in-Miami Era in Cleveland.

The night was a mixed result for the Nets’ new stars.

Pierce played 29:51 and led the Nets with 21 points. He also contributed five rebounds, one assist and four blocked shots.