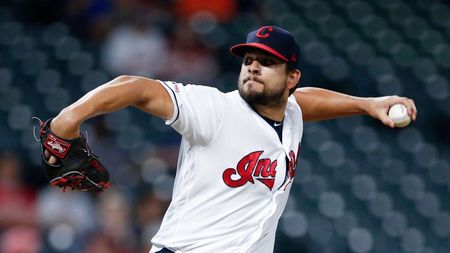 The New York Mets bullpen could be devastating this season if they can reach a deal with reliever Brad Hand.

Have a news week, New York sports? Since the Mets acquired Francisco Lindor and Carlos Carrasco from Cleveland, almost every team in the city has done something significant. From the James Harden trade to the Jets hiring Robert Saleh as their new head coach to… the Knicks… it’s been a busy week.

And the Mets are apparently going to ride the wave. According to reports on Friday morning, the Mets are closing on a deal with free agent closer Brad Hand to join an already deep bullpen.

Moments after following up this initial report with indications that the contract would be a two-year agreement, Rosenthal walked it back.

Correction: Mets engaged on Hand and in discussions, but two other sources say my initial report is inaccurate and the two sides are not close to a deal at this time. Mets have been interested in Hand since Indians declined his option.

A number of teams have been linked to Hand, including the Dodgers who are building a ridiculous bullpen of their own. The Dodgers recently signed reliever Blake Treinen to a two-year, $17.5 million deal to add more depth to their back end as they look to defend their title.

The biggest free agent closer deal signed to date this winter is the White Sox signing Liam Hendriks to what is effectively a four-year, $54 million deal. The Mets handed Trevor May a two-year, $15.5 million deal to bolster their bullpen earlier this offseason.

Hand, who will turn 31 on March 20, is a three-time all-star who spent the last two and a half seasons with the Cleveland Indians. A left-handed closer, Hand has an ERA+ of 157 and 104 saves over the past five seasons during which time he has a 2.92 FIP and 12.2 strikeouts per nine innings. He has 50 saves over the past two seasons and led the league with 16 saves during the pandemic-shortened 2020 campaign.

What does this mean for the Mets?

Their bullpen is going to be absolutely filthy.

With Carrasco in the fold, we’re already talking about Seth Lugo likely going to the bullpen. Edwin Díaz struck out 50 in 25.2 innings last season. New addition May struck out 38 in 23.1 innings for the Twins last season. Dellin Betances should be back at some point and now they can slot Jeurys Familia into fewer high-leverage situations.

Nevermind the fact the Mets should have a deep starting rotation as well, with Jacob DeGrom leading a group that could be one of the strongest in the National League.