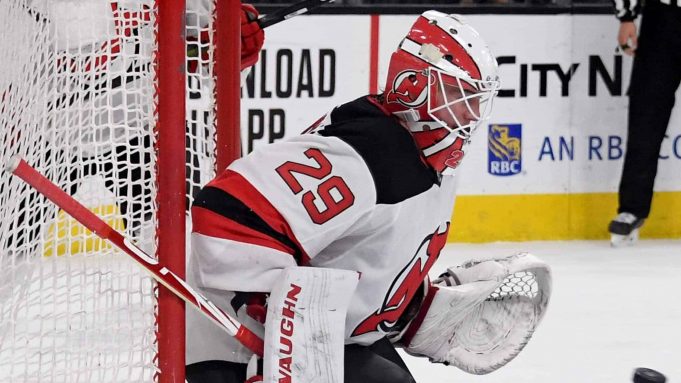 A surprise retirement threw the depth chart into a blender shortly before the new season begins.

As we get set for the new NHL season to begin, we’re breaking down the 2021 New Jersey Devils. We’ve already discussed the forwards and defensemen. Now, let’s turn our attention between the pipes.

The Devils looked liked they were going to have one of the best goaltending tandems in the league until veteran Corey Crawford announced his retirement on Saturday.

The team is still in good shape with MacKenzie Blackwood as their number one option in net.

The goalie has almost certainly solidified his role as the team’s netminder of the future and will look to have another solid year after posting a .915 SV% and 2.77 GAA in 47 games last season.

The question is, what’s going on behind him?

With Crawford gone, it looks like Scott Wedgewood is in line to be Blackwood’s backup, and it’s worth noting that Ruff has said he’s been solid in camp.

Lindy Ruff says that the goalie workload now with Corey Crawford retired "might not be 1A, 1B."

And added that "Blackwood's workload could go up."

He's been impressed with how Scott Wedgewood has played and competed through camp.

The Devils did claim Eric Comrie, who was impressive in the AHL, off waivers from the Winnipeg Jets on Tuesday, and it’ll be interesting to see how he fits into the plan.

Blackwood might be in store for more starts, as Ruff indicated, and the team and fan base will hope he can maintain great play throughout the entire season with an increased workload.

The Devils are a very young team comprised of several players who are question marks. They won’t make the playoffs but if the development of their players goes according to plan, the future in New Jersey is bright.

Eyes will be not only on the players but on Ruff, as well. His team must buy into his plan and be successful, in that regard, in order to take the next step. For many players on this team, the pressure’s on. Let’s see if they can take it.