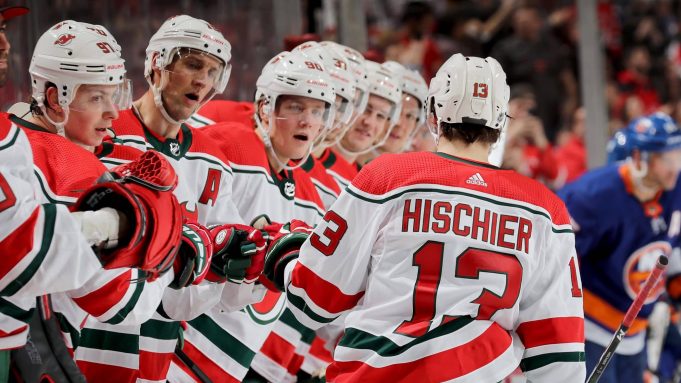 Who’s going to step up to lead the next generation of Devils?

Our 2021 season preview of the New Jersey Devils on the ice begins with the forwards. While Travis Zajac is chasing history, some young guns who were recently high draft picks need to elevate their game soon to prove they were worth the hype.

It’s important to begin by saying that the Devils had a bad forward group last year, especially in terms of scoring.

The organization has made some moves to bolster the offense and several players are expected to continue to progress, but envisioning that this group will be a well-rounded and high-scoring one is unrealistic.

Even so, looking at the players individually and how they’ve done at camp is important.

This is supposed to be a significant season in the career progression of Nico Hischier. The former first overall pick has been one of the team’s top forwards since making his NHL debut in 2017, but he has yet to take the next step from good player to superstar.

In order to do emerge as a leader and star on this team, Hischier must stay healthy – something he’s had trouble with over the past two seasons.

And, unfortunately, Hischier is going to miss the team’s first several games after sustaining a leg injury.

The fact that he still isn’t skating is worrisome and could be indicative of a long-term absence, meaning the 22-year-old center’s season is already off to a rough start.

When he does return, he needs to work on improving his scoring after putting up just 14 goals in 58 games last season. He also needs to improve defensively, something that Ruff will surely emphasize once Hischier is cleared to practice.

Hischier likely would’ve opened the season as the team’s 1C and that might be the case once he does return, barring a great stretch of play by this next guy. 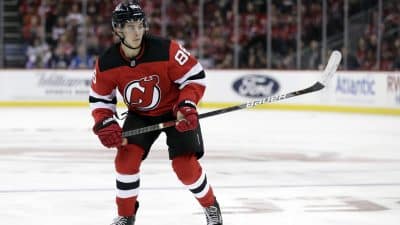 Another first overall pick, Jack Hughes had a disastrous rookie season (in fact, he was one of the worst first-year players in the league). He scored just 21 points in 61 games, got hurt, and was a defensive liability.

Things really couldn’t have gone worse for the young center. That’s why his development this year will be crucial.

Going into the 2019-20 season, Hughes was seen as a core piece of the future that the Devils would build around for years to come. If that’s going to be the case, Hughes will have to show a great deal of progress this year.

Hischier’s injury might come to Hughes’, who’s had a fantastic camp, benefit, as the 19-year-old will be centering the team’s best line.

There really shouldn’t be an excuse for him to play poorly, and all eyes will be on him to gain confidence and refine his game.

Speaking of relative disappointments, Nick Merkley was one of the central pieces the Devils acquired last year from the Arizona Coyotes as part of the return for Taylor Hall. Even though he was having a decent camp, Merkley found himself on waivers Monday.

Thankfully he cleared and, at only 23, still could have a place on the NHL roster at some point this season.

Nathan Bastian’s role on this Devils team is obscure but interesting.

He appears to have made the final roster, which is impressive and shouldn’t come as much of a surprise after a solid showing at camp, but the question becomes whether or not he can maintain a starting forward job.

Bastian is a right winger who turned 23 years old in December and has played in just seven NHL games, all in the 2018-19 season.

Because the Devils have some missing forwards to start the season, Bastian will almost certainly be a starter for the team’s first few games, likely as the fourth line right winger.

Bastian will be part of a very underwhelming bottom six group, but he’s one of the team’s biggest question marks. If he has a hard time doing well, he’ll likely become the team’s 13th forward or even a taxi squad member once the team gets healthy.

But if he comes out strong, he could earn himself a permanent starting job and vastly improve the Devils with regard to depth on the wings. Remember: offensive production at the wing position is one of this team’s most significant issues.

Jesper Boqvist is in a similar spot as Bastian. Boqvist, who is a centerman capable of playing on the wing and turned 22 years old in October, is also likely to start in the bottom six (likely on the third line) on opening night because of injuries.

Boqvist played in 35 games for the Devils last year and was bad. He’s young and has just less than half a season of NHL-hockey under his belt, but he must work on improving his game if he hopes to maintain a starting role with the team.

He did have a good camp, which was encouraging. We just have to see if that play can translate to the regular season.

To the relief of fans and the benefit of the organization, left winger Jesper Bratt agreed to a two-year deal with the Devils on Sunday.

He emerged as one of the team’s best and most important forwards and will be featured in the top six.

It’ll be some time before Bratt’s season begins.

He’s currently in his home country of Sweden waiting to obtain a work visa to travel back to the United States and then will have to wait some more until he’s completed his seven-day quarantine and is able to present four consecutive negative COVID-19 tests.

Until then, he won’t be able to even practice. His absence will be felt in the team’s first several games but the goal will be to fill the void as best as possible.

Nikita Gusev is a big name to watch this year. The 28-year-old winger was so bad on both ends of the ice for the first chunk of last season (which was technically his rookie season) that he was benched.

However, he was able to improve his game to the point where he became one of the team’s most valuable forwards. After scoring 14 points in his first 29 games, Gusev picked up the slack and scored an impressive 30 in his last 37.

The question regarding Gusev this season is if he’s able to pick up where he left off.

Ruff was asked about Gusev earlier in camp and praised his offensive ability while noting that they’re working hard on improving his defense, something he struggled with last season.

"I think there's there's opportunities when a highly skilled player like that can play above the other teams' defensive structure."

Ruff sees big improvement in Gusev at the start of his second year. #NJDevils | @PlymouthRock https://t.co/gMfXfuVe7X

His development as a reliable and productive two-way, top-six forward is paramount.

The acquisition of Andreas Johnsson from the Toronto Maple Leafs was one of the best moves Fitzgerald made this offseason.

Johnsson is likely to begin the season as the Devils’ number one left winger, something that could aid tremendously in the development of Hughes.

Johnsson, who turned 26 in November, is an all-around solid and versatile player, capable of playing on either wing. He’s scored 67 points in 125 career NHL games and is a solid defensive forward who can contribute on both the power play and penalty kill.

Now that he’ll have a top six role in New Jersey, his numbers should only improve.

Janne Kuokkanen is yet another young forward who will have a chance to earn a permanent spot with the team this year.

Kuokkanen, who has featured in just 11 NHL games, was acquired by the Devils last season from the Carolina Hurricanes in exchange for Sami Vatanen.

The 22-year-old has had a successful AHL career and played well at training camp, allowing him to make the team’s final roster. Kuokkanen, a left winger who can also play center, will also open the season as a member of the team’s bottom six.

Michael McLeod is another young player who’s slated to start the first few games for the Devils in the absence of some forwards.

McLeod, who will be turning 23 at the beginning of February, was drafted by the Devils with the 12th overall pick in 2016 and while the hope was that he would’ve had more NHL games under his belt, he has been decent in his five career games with the Devils (five assists in five games) and finally has the chance to prove his worth this season. He should be featured as the team’s 4C.

There isn’t too much to say about veteran right winger Kyle Palmieri, who’s recently been the Devils’ best scorer. Palmieri will likely be the Devils’ bona fide top line right winger, and will also have the important role of helping Hughes take the next step.

The coaching staff and fan base will also hope that Palmieri’s solid defensive play last year will carry into this season.

After lighting up the KHL and a solid training camp, Yegor Sharangovich is slated to make his NHL debut on opening night.

The 22-year-old played on a line with Boqvist for much of training and the two had good chemistry, so look for them to be featured on the same line in the bottom six to kick things off.

Veteran Miles Wood will be another member of the team’s bottom six whose physicality and experience will be valued. The 25-year-old left winger was on pace to set a career-high in assists last season.

Pavel Zacha is another Devils player to watch this season. The 23-year-old was inconsistent last season but did manage to set a career-high in both assists and points.

He’s also been one of the best penalty-killing forwards in hockey over the past several seasons, and Ruff will expect him to continue to thrive, in that regard.

Zacha is a centerman who is also capable of playing on the wing, and we can expect to see him get consistent playing time as a middle-six forward.

Last but not least is Travis Zajac, the beloved veteran center. The 35-year-old, who’s played his entire NHL career with the Devils, is the closest active player to the 1,000-game milestone with 991 currently under his belt.

In Hischier’s absence, Zajac is likely to center the Devils’ second line.