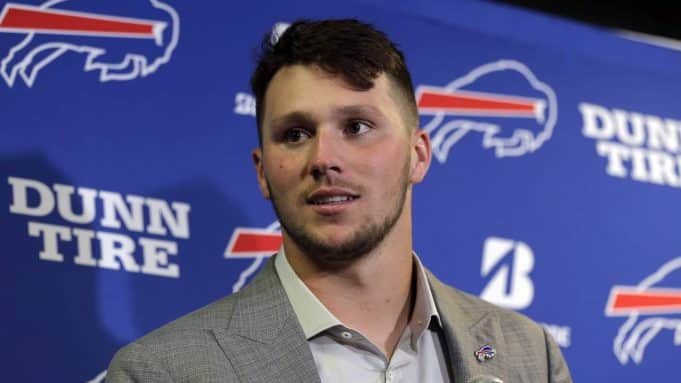 The NFL expanded the 2021 postseason to 14 teams, providing only the top seed in the NFC and AFC with a bye during the wild card. That means we get six games this weekend – three on Saturday and three more on Sunday.

Because we fancy ourselves to be experts at both sports and losing money, the staff at ESNY thought we would offer our picks for the weekend. Please feel free to jump into the comments before, during and (especially) after the games to tell us how right/wrong we were.

With that, let’s get into the good stuff. Here are our picks, listed in order of game starts. 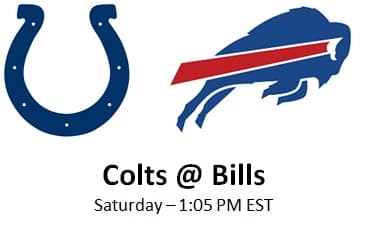 The Buffalo Bills make their triumphant return to the postseason and get to hose a Colts team that won 11 games, yet needed help on the final Sunday of the regular season to get into the dance.

Colts quarterback Philip Rivers, who spent the previous 16 years with the Chargers, will appear in the playoffs for only the second time since 2013. He has a career 5-6 record with 14 touchdowns and 10 interceptions in the postseason.

When Rivers was drafted (reminder: by the Giants) in 2004, Bills quarterback Josh Allen was four weeks shy of celebrating his eighth birthday.

The Bills will have some of the Bills Mafia in the seats for this one, which should make for a fun watch. 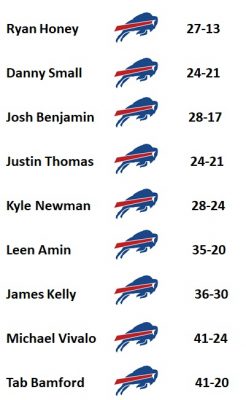 So, in review, we aren’t giving the Colts a chance. However, given the O/U is resting comfortably at 51½ it looks like some of our crew are more confident in that number than others. 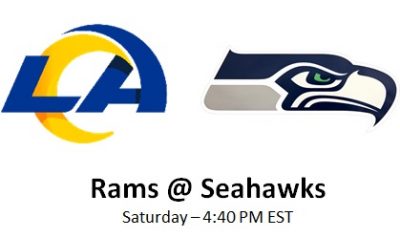 Will Jared Goff play? And can he grip/throw a ball? And, if he is healthy, who will get the most looks with Cooper Kupp returning from COVID-19?

Will Aaron Donald and Jalen Ramsey ruin the weekend for Russell Wilson, DK Metcalf and company? Does TJ Lockett go off (again) with the potentially explosive Ramsey-Metcalf matchup getting all the attention.

There’s a lot to be excited about with this game even if the Rams barely got into the dance. 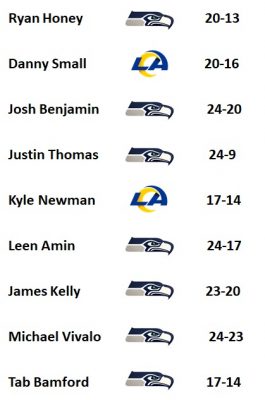 The Rams have two voices in the room, likely driven by the unknown status of Goff. Most of us think it’ll be a close game (Justin’s giving the Rams no love whatsoever). 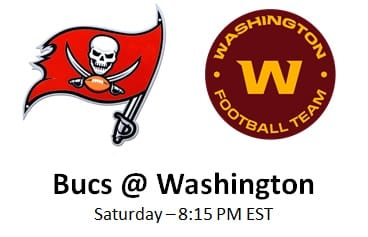 Ah, the old 11-win team playing a road playoff games against a sub-.500 team because the NFC Least gets an automatic bid. This one should be fun.

In reality, this game could be one of the most fun of the weekend. The Tom Brady-led Buccaneers head into our nation’s capital to face one of the most dynamic defenses in the league. Chase Young, the prohibitive favorite for NFL Defensive Rookie of the Year, wanted the GOAT and he’s getting him in the nightcap on Saturday. 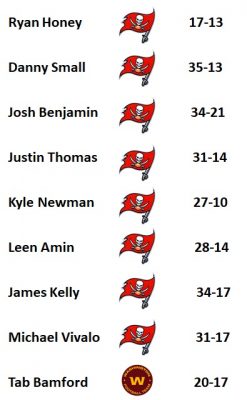 We’re not sure if our new Editor in Chief, Tab Bamford, is on something or if he’s trolling the NFC Least with this pick, but the rest of the staff is riding the Brady Train into the second round. For what it’s worth, the line on this game has gone up two full points since open in favor of Tampa. 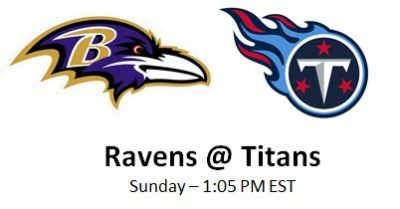 The difference is where the rushing comes from; Derrick Henry rushed for more than 2,000 yards and is a legit MVP candidate for the Titans while three rushers (Lamar Jackson, JK Dobbins and Gus Edwards) had at least 700 yards on the ground for the Ravens this season.

Will Lamar Jackson get it right in the postseason? Or will Derrick Henry continue doing whatever he wants when he gets the rock? 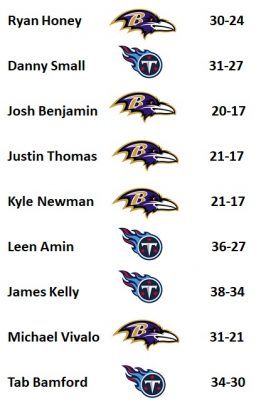 Based on the predictions it looks like this should be a fun one to watch. Tennessee has only hit the Under three times this season (with one push) while the Ravens have been under nine times. We’ll see how the action pushes the number for this weekend. 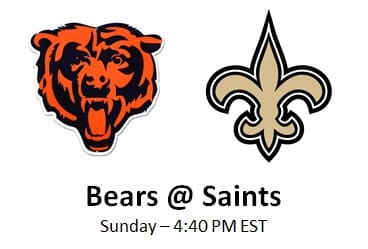 Da Bears come in (rightfully) the biggest dog of the weekend after losing their regular season finale but backing into a playoff berth thanks to a tie-breaker with the Cardinals. Mitchell Trubisky has been better since he returned from his time on the bench but Chicago’s defense hasn’t been very tough.

New Orleans is making one more run at a title to put a cap on Drew Brees’ legendary career. He’s still working his way back from broken ribs and punctured lungs and everything else, but the Saints’ defense figures to give the Bears problems. 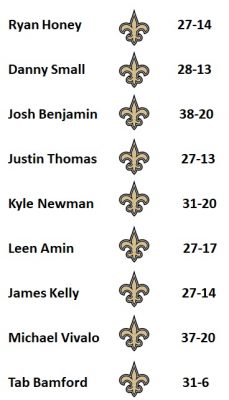 Sorry, Bears fans. It doesn’t look like our crew has any love for Mitchell and company. The Saints appear headed to the second round with ease.

It’s worth noting, however, that after going Under in seven of their first ten games, Chicago has hit the Over in five of six to close out the season. 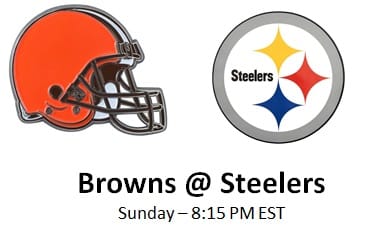 What a way to wrap up the weekend! The Fightin’ Baker Mayfields against their hated rival in Pittsburgh.

These two teams played in Week 17 and Cleveland barely hung on against a Steelers team that sat many of their regular starters. The Browns will also be without a few folks who were diagnosed with COVID-19 earlier in the week, including head coach Kevin Stefanski.

Pittsburgh limped into the playoffs and their defense will need to be better against a Cleveland offense that has plenty of weapons. This should be a good old fashioned rivalry game to put a beautiful bow on Wild Card Weekend. 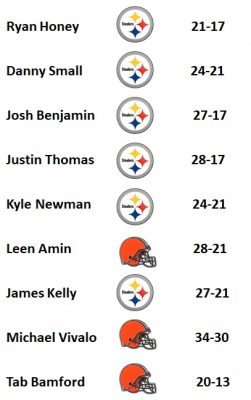 The line on this game has doubled since it opened at Pittsburgh giving three. Will the coaches not in the building have that much of an impact on the Browns’ performance? Only three of our experts picked Cleveland to survive and advance.