Patrick Graham turned the New York Giants defense around in 2020, but how well did each of the players do individually?

Comparing the 2019 New York Giants defense to the 2020 unit is like night and day. Big Blue went from 30th to ninth in scoring as well as 25th to 12th in total defense.

Much of this had to do with the efforts of defensive coordinator Patrick Graham, who the Giants just signed to a well-deserved extension. His game-planning and ability to utilize the team’s personnel in the most effective of ways led to the unit’s overall success.

You have to give credit to the players who executed on the field though. Some of New York’s defensive weapons played the best football of their lives in 2020 while others portrayed noteworthy potential.

We already graded the performances on offense. Now, let’s dive into the player grades for the 2020 Giants defense. 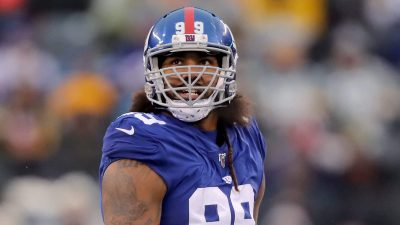 Leonard Williams began to prove that the 2019 trade for him was worth it. The veteran defensive end, who played the season under the franchise tag, posted career-highs in sacks (11.5), quarterback hits (30), and tackles for loss (14). His sack total was also seventh in the NFL.

The only reason he earns an “A-” and not an “A” is because of the three-game stretch late in the year when he recorded zero combined sacks along with just one tackle for loss and one quarterback hit.

Second-year defensive lineman Dexter Lawrence certainly improved from his 2019 rookie campaign. By season’s end, the former Clemson Tiger had recorded 53 combined tackles, six tackles for loss, 10 quarterback hits, and four sacks. His 79.7 Pro Football Focus grade was a solid mark and he continued to be a dominant presence on that successful run defense (the Giants were 10th with 111.4 rushing yards allowed per game).

Dalvin Tomlinson underwent a similar season to Lawrence and racked up 49 combined tackles, eight tackles for loss, 10 quarterback hits, and 3.5 sacks. While his Pro Football Focus grade (75.2) wasn’t as high as Lawrence’s, it was still a productive mark.

The Giants should absolutely prioritize re-signing Tomlinson in the offseason.

Inside linebacker Blake Martinez was a phenomenal pickup for the Giants last offseason. The organization brought him in due to his ability to be a “tackling machine,” and that’s exactly what he was in 2020.

Martinez led the team with 151 combined tackles, a mark that additionally put him at second in the conference and third in the entire NFL.

He recorded a solid PFF grade of 75.9 and was an absolute leader on this superb defense.

Crowder tied for fifth on the team with 57 combined tackles while only playing in 11 games.  It was amazing that the organization actually trusted him to start in six of those matchups given he was a seventh-rounder.

His go-ahead scoop-and-score late in the Week 6 win over Washington was likely the highlight of his rookie campaign.

After Lorenzo Carter and Oshane Ximines went down and Markus Golden was traded, it was clear Kyler Fackrell was the team’s best edge rusher. He finished the year with just four sacks and 10 quarterback hits though, so the production wasn’t exactly sensational. This is why he receives a C+ grade despite being tied for second on the team in either of those two categories.

The Giants could benefit from bringing him back next year, but he’ll need to remain healthy. Fackrell missed four games in 2020 with a calf injury.

Rookie linebacker Cam Brown has a lot to work on if he wants his on-field responsibilities to expand in 2021. Regardless, he definitely portrayed promise in his first year.

Brown proved he can be an off-ball linebacker but also someone capable of pressuring the opposing quarterback.

All in all, he did what was asked of him and could end up seeing more reps in 2021, especially since Patrick Graham will be returning.

This is pretty self-explanatory.

The veteran defensive back was arguably the top cornerback in the league this year and an easy Pro Bowl selection. He additionally could end up becoming an All-Pro.

Bradberry allowed just 3.7 catches and 38.9 yards per game when targeted by opposing quarterbacks.

Isaac Yiadom improved throughout the season, but he still wasn’t great at the cornerback spot opposite Bradberry and is definitely replaceable heading into 2021. His 56.8 PFF grade was weak and far lower than Bradberry’s (79.8), and there’s a chance the Giants possibly lost trust in him. After finding himself on the field for 100% of the defensive snaps from Week 8-14 (bye in Week 11), Yiadom took just one defensive snap against Dallas in Week 17.

The Giants may look to improve that spot in the draft anyway and could do so with the No. 11 overall pick.

Logan Ryan went out in 2020 and proved exactly why the Giants signed him right before the commencement of the regular season. His versatility greatly benefitted the team in a number of ways and he gained the full support of the coaching staff (there’s a reason he was on the field for 100% of the defensive snaps in 12 different games).

Ryan finished the season with 94 combined tackles and 68 solo tackles (both second on the team). He additionally led the Giants with a trio of forced fumbles.

The former Patriot and Titan formed one of the more athletic and versatile safety tandems in the league alongside Jabrill Peppers, and Dave Gettleman certainly made the right move inking him to a three-year extension in December. 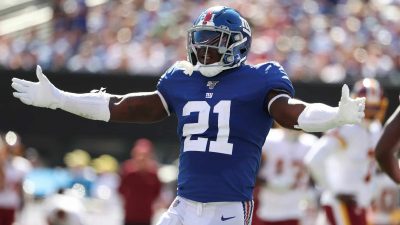 Jabrill Peppers underwent the best season of his career in 2020 and was one of those reliable leaders who always made plays. Call him a “defensive quarterback” if you will. “Pro Bowl snub” works as well.

He’s just as versatile as Ryan, and considering the Giants locked Logan into a new deal, the organization would benefit from doing the same with Peppers. Jabrill is entering the final year of his deal after Big Blue exercised his fifth-year option in 2020.

B.J. Hill experienced an average year in his third season and wasn’t a massive aspect of this defensive unit. He posted career-lows in combined tackles (32), solo tackles (15), and sacks (1.0). Hill additionally didn’t possess the type of trust from the coaching staff that others possessed, never playing 50% or more of the defensive snaps in any game.

Seventh-round linebacker Carter Coughlin underwent a first season similar to his rookie counterpart, Cam Brown. He wasn’t a significant part of the defense but stepped up when his name was called.

Coughlin carries the potential to be a versatile asset and produce as both an off-ball linebacker and pass rusher, but the pass-rushing numbers need to improve over time. The former Minnesota Golden Gopher racked up just one sack and a pair of quarterback hits in 2020.

The rookie slot cornerback out of UCLA showed promise and potential in his first season, assuming significant responsibility as a fourth-round draft pick. In 12 games, Darnay Holmes notched 30 combined tackles (23 of which were solo) with five pass breakups.

There were, however, a few issues. The injuries (four missed games) were a concern and so was the production in coverage (allowed quarterbacks to complete 74.5% of passes for 343 yards and an 85.7 rating when targeting him).

Holmes additionally experienced penalty-related issues, committing five on the year including a defensive holding that negated a Xavier McKinney interception in Week 17.

The second-year player was mostly used as a situational safety. Regardless, Julian Love continued to prove that he possesses the potential to get the job done in the defensive backfield.

Love only started six games but was fourth on the team in combined tackles (64), portraying the ability to come up and stop the run.

However, he wasn’t the greatest in pass coverage, allowing 71% of targeted passes to be completed for a combined quarterback rating of 127.9.

Since he might be more of a situational type of player, he’s someone that could continue to rotate in with the other safeties and find success within Patrick Graham’s schemes.

Xavier McKinney gets a C+ because he didn’t exactly have the largest sample size (only played six games after missing much of the year with a foot fracture). However, when he was healthy, he stepped up and began to assume expanding responsibilities over the final four weeks of the regular season.

During that span, he averaged six combined tackles per game. He’s versatile and can also make plays in coverage, just like he did in the Week 17 win over Dallas when he recorded the game-sealing end-zone interception.

If he remains healthy in 2021, McKinney should make even more of an impact for New York’s defense.