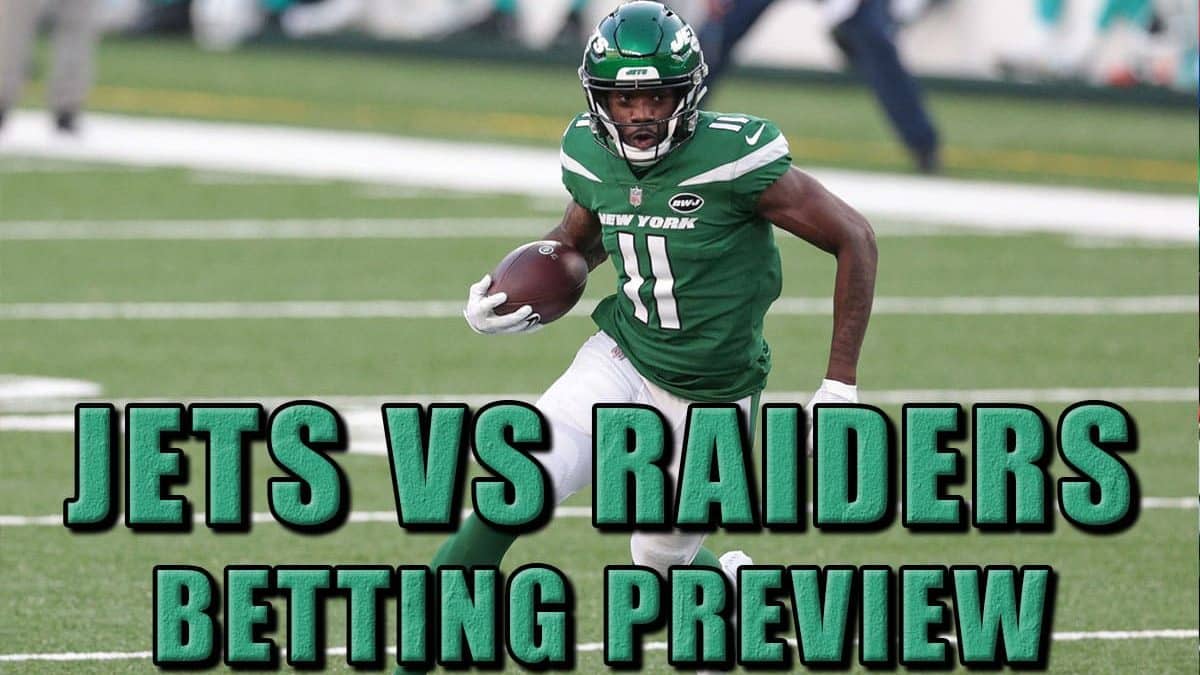 The Jets are home this weekend and will take on the 6-5 Raiders at MetLife Stadium. Both teams are coming off blowout losses, so could the Jets ultimately win their first game of the year against this darkhorse AFC playoff team? Let’s take a look at the Jets vs. Raiders odds and provide our picks and a prediction.

The Jets are currently 8.5-point home underdogs and are +335 on the moneyline in comparison to the Raiders’ -400. The total is set at over-under 46.5.

Get 50-1 odds on the Jets, Giants, or Eagles to score a point at FOX Bet in NJ here or in PA here. Read more about it here.

Sam Darnold will be playing in his second straight game after missing two consecutive matchups (Weeks 9 and 11) with a shoulder injury. After looking improved in those two games without the third-year quarterback, the Jets were soundly beaten 20-3 by the division-rival Dolphins in Week 12. They’re also dealing with a number of injuries to their offensive line along with a non-injury-related situation involving guard Alex Lewis.

The Raiders, on the other hand, are coming off a blowout loss in which the Falcons defeated them 43-6. This Vegas team is talented but definitely confusing. The Raiders have lost to Atlanta and New England but handed the Chiefs their only loss on the season thus far.

Nonetheless, ousting this Jets team for their seventh win of the year shouldn’t be a challenge for Jon Gruden and co.

I don’t want people getting too hung up on the Raiders’ losing by 37 to the Falcons, okay? That was a fluke game — most teams experience them. This Raiders team is talented, having defeated the Chiefs in Week 5 before losing to them by just four in Week 11.

Vegas also defeated the Broncos and Chargers, both teams that have beaten the Jets this year.

The Raiders sport a good enough offense led by quarterback Derek Carr that shouldn’t have a problem putting up points against this weak Jets defense (29th in the NFL with 29.3 points allowed per game). Vegas is in the top half of the league in scoring with 26.5 average points.

This should take the pressure off the Raiders defense, but was there much pressure to begin with anyway? The Jets offense is dead last in total yards per game, passing, and scoring.

All of the aforementioned information should make you believe that Gang Green won’t cover.

For what it’s worth, the Raiders are 7-4 against the spread this year while the Jets are 3-8.

Jets-Raiders Total Pick: Hammer the Under

For the Jets-Dolphins game, I told everyone to take the over and it didn’t hit, so I promise I won’t make the same mistake this time.

As was previously mentioned, the Jets offense is horrific and hasn’t been able to consistently score points. Sure they respectively put up 27 and 28 points against the Patriots and Chargers, but followed that up with a lousy three against Miami.

The Raiders should be decent contributors to the total considering they sport a good enough offense. So if over-46.5 is going to hit, the Jets may need to score around 17 points, a mark that I don’t see them attaining despite the struggles in and around Vegas’ defensive unit. New York just doesn’t employ enough talent or consistency on that side of the ball, simple as that.

The Jets have scored at least 17 points in a game just four times this season.

After a slight improvement in Weeks 9 and 11, the Jets came back down to earth with a 20-3 loss to the Dolphins in Week 12. Head coach Adam Gase remains unfit to reside in his role, Darnold has struggled mightily and could be on his way out, the offensive playcalling is a disaster, and the defense can’t consistently stop anyone.

With that, I say the Raiders will win this game outright. Despite the betting risk on DraftKings Sportsbook ($400 risk for a $100 profit), this should be an easy cash grab.

The Raiders defense shouldn’t experience any issues containing this putrid Jets offense. Therefore, Vegas’ offensive unit won’t need to accomplish too much in order to win this game. Even scoring just 20 points should lead to a win.

Vegas is 3-1 outright when favored this year while the Jets are 0-10 when entering as underdogs.

Bet the Raiders to win outright (-400) at DraftKings Sportsbook here.

The Raiders are motivated to put the fluke against Atlanta behind them and notch a victory in what’s an extremely winnable game against the Jets. Take them with the spread (-8.5) and on the moneyline (-400), and also hammer the under (46.5).

However, I’m definitely taking the Jets to score at 50-1 odds with FOX Bet (get it here).

Get 50-1 odds on the Jets, Giants, or Eagles to score a point at FOX Bet in NJ here or in PA here. Read more about it here.