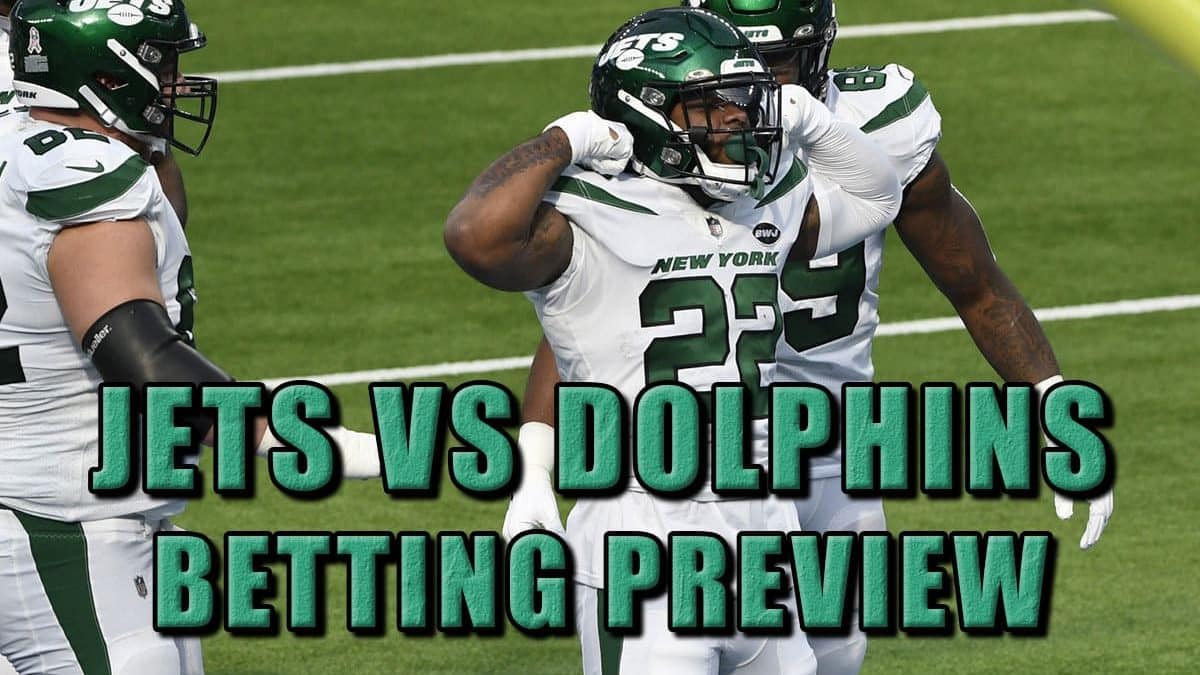 The Jets are back home this Sunday and will look to notch their first win of the 2020 season against the division-rival Dolphins. Will they ultimately get the job done? Let’s take a look at the Jets vs. Dolphins odds and provide our picks and a prediction.

The Jets are currently 7.0-point home underdogs and are +245 on the moneyline in comparison to the Dolphins’ -286. The total is set at over-under 44.0.

For the first time since Week 8, Sam Darnold will be in the starting lineup for the Jets. The third-year quarterback has been dealing with a shoulder injury and missed four of the team’s last six games.

Sure, it’s always good to return your starting quarterback from injury, but the Jets did look improved in Weeks 9 and 11 with veteran backup Joe Flacco under center. Not to mention, there’s a chance Darnold could be rusty and still dealing with some soreness — he did begin this week of practice on a limited basis.

The spread is decently wide at seven points (per DraftKings Sportbook), but I don’t think it’s a stretch to say the Dolphins will win this game by more than that.

While the Jets are the worst team in the NFL at 0-10, the Dolphins are en route to a potential playoff berth — what would be their first since the 2016 season. They’re 6-4 and hot, having won five of their last six games. They’re additionally one of the better scoring teams in the league on either side of the ball (13th on offense, fourth on defense).

Not to mention, it was an absolute blowout the last time these two teams met in October. The Dolphins won by a score of 24-0, and that was with a healthy and fresh Joe Flacco under center for the Jets instead of a potentially rusty and still-sore Darnold.

The Jets are simply putrid on either side of the ball while the opposition is one of the more surprising teams in the league this year.

Entering this game, the Dolphins are 7-3 against the spread. The Jets, on the other hand, are 3-7 in those regards.

The Dolphins have also covered in each of their last five meetings with the Jets.

Bet the Dolphins -7.0 over the Jets at DraftKings Sportsbook here.

Jets-Dolphins Total Pick: Hammer the Over

I almost took the under here, but I’m going to stick to my initial instinct and advise you to hammer the over.

Look, as was mentioned previously, we don’t know how good this Jets offense will be with Darnold under center again. There’s a chance he’s rusty, which obviously wouldn’t lead to a significant amount of scoring especially against a fairly strong Miami defense.

The Jets are averaging just 14 points per game this year when Darnold is in the starting lineup.

However, this Jets defense is horrific on the scoring front and allowing 30.2 points per game (31st in the NFL). If the over (44.0) is going to hit, the Dolphins may need to score around 30-35 points, and that’s definitely doable considering this statistic involving New York along with the Dolphins’ sheer ability to score. Miami has surpassed that 30-point threshold three times this season.

It may be a close call, but I say take the over on the total.

It doesn’t matter if Darnold starts (which he’s set to do) or Flacco. This Dolphins team is much more talented than the Jets right now on either side of the ball. Miami employs a better quarterback situation, better offensive line, and better defense, there’s no doubt about it.

Albeit a slight risk ($286 wager to earn a $100 profit), I don’t think there’s a chance the Jets win this game outright. The Dolphins even defeated the Jets last year when they were supposedly “tanking.”

The Dolphins have won outright in four of their last five meetings with the Jets.

Bet the Dolphins to win outright at DraftKings Sportsbook here.

The Dolphins are motivated to get back on the right track after coming up short against Denver last week. Take them with the spread (-7.0) and on the moneyline (-286), and also hammer the over (44.0).