Michael Nania’s New York Jets’ 2019 season in review stays targeted in on the defensive line, with Nathan Shepherd this time around.

Career recap: The Mike Maccagnan-led New York Jets took Nathan Shepherd with the 72nd overall pick in the third round of the 2018 Draft. It was a surprising selection for many reasons, number one being the fact that the Jets had just taken their franchise quarterback two rounds earlier and desperately needed some pass-catching and offensive line help for him. Dallas took wide receiver Michael Gallup nine picks later at No. 81 and Baltimore took right tackle Orlando Brown at No. 83.

Secondly, Shepherd was one of the least-known prospects taken on Day 2 among the general NFL fanbase, having played his college ball at Division II Fort Hays State. There was little information available to glean on him.

Finally, Shepherd was 24 years old at the time of his selection and would turn 25 during his rookie season, continuing a Maccagnan trend of taking older prospects in the late rounds.

Shepherd’s incredible physical attributes (and a phenomenal Senior Bowl) are what put him into the mix in round three. With a special blend of size, power, and burst, Shepherd possessed intriguing pass-rush upside that made him worth taking a risk on. 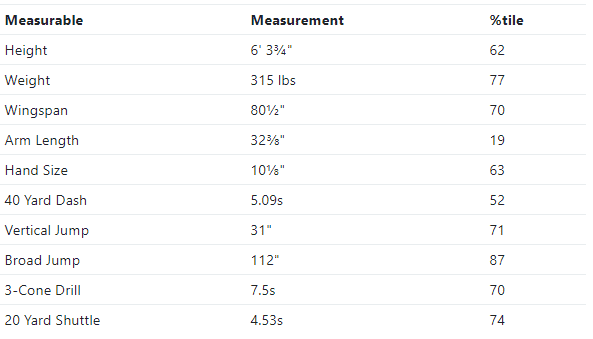 Shepherd cracked the Jets’ opening week rotation, playing in 46 percent of the team’s defensive snaps in the team’s 48-17 win at Detroit. He would play in all 16 games and average about 20 snaps of playing time, but ultimately, it was a disappointing debut season.

Against the run, Shepherd was a major liability, ranking 128th out of 133 qualified defensive tackles in run-stop percentage (rate of run-defense snaps recording a run stop) at 2.9 percent. Missed tackles were another problem, as Shepherd ranked 111th in tackling efficiency (ratio of tackles to missed tackles) with three misses to only 12 total tackles. Shepherd had a tough time hanging tight in the run game, often over-shooting gaps or being blown off the ball.

As a pass-rusher, Shepherd did show some nice upside. He ranked 59th at his position in pass-rush productivity (per-snap pressure rate with greater weight to sacks), racking up 12 pressures on 150 rushes (an 8 percent rate, better than the positional average of 7.3 percent). On the downside, none of his 12 pressures were sacks, as finishing was an issue for the rookie.

After averaging 25 snaps over his first 10 games, Shepherd’s playing time was cut due to his lackluster performance, as he appeared in just 15 snaps on average over his final six games. There were moments in which Shepherd’s tremendous potential flashed, but they were fleeting. He was a liability upfront in his rookie season, a worrying sign considering he was already 25 years old.

2019 expectations: With the addition of Quinnen Williams, the Jets’ defensive line room became extremely crowded heading into 2019. The freshly-selected No. 3 pick, Leonard Williams, Steve McLendon, and Henry Anderson appeared to be roster locks, leaving Shepherd to fight with players like Folorunso Fatukasi, Bronson Kaufusi, and Kyle Phillips for the final few spots at the position.

Shepherd had a quiet preseason, racking up just three pressures (zero sacks) and two tackles (one run stop) over 92 snaps throughout all four games. However, he did enough to impress the coaching staff, making the initial 53.

Shepherd was inactive for the Jets’ season-opener against the Bills, and two days later, it was announced he would serve a six-game suspension for a PED violation.

At that point, expectations for Shepherd could hardly have been lower.

Positives: Shepherd finally got on to the field for his season debut in Week 9. In his second game of the season, Shepherd went off against the Giants, dominating guard Will Hernandez just as he did at the Senior Bowl. Watch here as Shepherd beats Hernandez for a sack on Daniel Jones (this play was wiped out by a Nate Hairston hold that had no effect on the sack itself).

After his first sack was wiped out, Shepherd came back later in the game and got the first official sack of his career. Shepherd throws a smooth swim move to beat left tackle Eric Smith, getting the sack on Jones after the Jets brought only four rushers against an eight-man protection.

Shepherd’s two-sack outburst against the Giants was a sign of things to come. In nine games, Shepherd collected 14 pressures over just 134 pass-rush snaps. He ranked 17th out of 118 qualified defensive tackles in pass-rush productivity and 21st in pressure rate (10.4 percent). Although the sample size was small, Shepherd started to fulfill his potential as a pass-rusher.

On this play against the Bills, Shepherd creates pressure that leads to a Jordan Jenkins strip-sack. Shepherd attacks the B-gap between the right guard and right tackle, and then a blitz by Jamal Adams draws the guard away from Shepherd. He takes full advantage, swiping away the tackle and slipping through a tight space to get home and force Matt Barkley out of the pocket.

Here, Shepherd gets a hard hit on Lamar Jackson that contributes to an incomplete pass on third down. Look at how much penetration he gets against the center, Patrick Mekari. An excellent display of Shepherd’s raw power.

Negatives: Tackling and run defense remained issues for Shepherd, although he took some steps in the latter category. After ranking 128th at his position in run-stop percentage as a rookie, Shepherd ballooned to 73rd in 2019 (6.7 percent), collecting five stops over 75 snaps in run defense.

In the tackling department, Shepherd remained brutal, ranking last at his position in tackling efficiency with five misses to nine tackles.

Future Outlook: Shepherd all but locked up his 2020 roster spot with an impressive finish to 2019. Set to turn 27 during the upcoming season, there might not be much more progression in store for him, but then again, we thought the same thing prior to this past season. Perhaps the transition from D-II to the NFL has left Shepherd with an unusual growth curve that extends into his late-20s.

In 2020, the goal is for Shepherd to extrapolate his pass-rushing efficiency over a larger sample. Improvement against the run could take his game to an entirely new level, but even if he does not make any strides in that area, he can bring a lot of value with his abilities in the passing game. If Shepherd can prove he is capable of maintaining pass-rush prolificacy on a yearly basis, it will have been a successful third season for the man affectionately known as “Canadian Thanos.”