The New York Jets selected Folorunso Fatukasi with the 180th overall pick in the sixth round of the 2018 Draft. A versatile and powerful 314-pound defensive tackle from Connecticut, the Far Rockaway, NY native joined Nathan Shepherd (Round 3, Pick 72) as the second defensive linemen chosen by the Jets in that draft.

In his final season at Connecticut, Fatukasi picked up 45 tackles (7.5 for loss) and four sacks. His technique was raw, leading to him tumbling into Day 3, but his upside was obvious. Fatukasi consistently flashed incredible power on tape, and that was backed up by his eye-popping measurables. 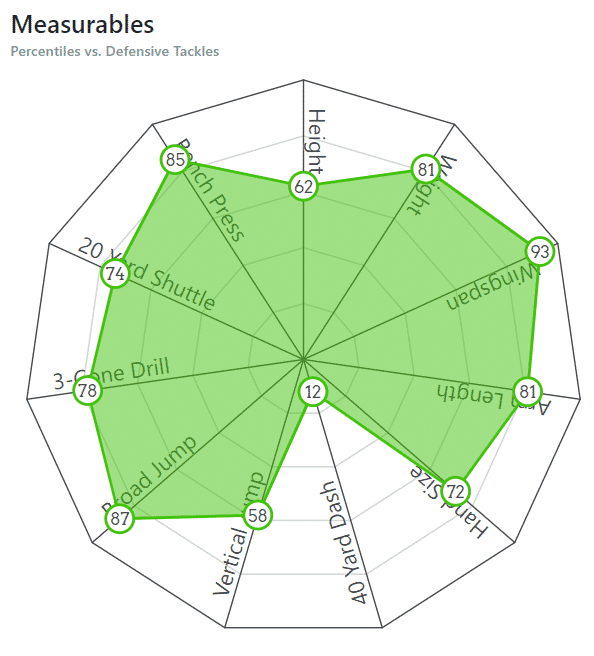 Fatukasi had a solid training camp and preseason in 2018, but could not crack the Jets’ deep defensive line rotation. He appeared in only one game, a Week 12 meeting with the Patriots, playing just three defensive snaps.

The Jets’ already-deep defensive line group became even more crowded with the addition of Quinnen Williams, leaving Fatukasi as an afterthought to most fans. With Williams, Leonard Williams, Steve McLendon, Henry Anderson, and Nathan Shepherd all figuring to be key parts of the rotation, Fatukasi seemed to be one of the odd men out.

That is, Fatukasi did seem like an odd man out, until he got the chance to take the preseason stage. The New Yorker had a dominant exhibition campaign, showing off substantial progression. Fatukasi was consistently flashing exceptional snap timing, which maximized the potential of his raw power and led to beastly plays like this one.

It quickly became obvious that the Jets needed to find a way to get Fatukasi on the field. He seemed to already have locked up a roster spot through his high-quality play, but an eight-game suspension afforded to Shepherd would officially punch Fatukasi’s ticket as a key cog up front to begin the year.

Clearly, Fatukasi was going to get the opportunity to showcase whether or not his excellent preseason performance was for real. If he could keep the fire burning into the regular season, Fatukasi had the potential to take the defensive line to another level.

Jets fans know what it is like to be bamboozled by exciting preseason performances. That did not happen with Fatukasi, who accomplished the rare feat of smoothly carrying over his preseason production into the regular season.

Fatukasi played in 14 games and logged 391 snaps. He was one of the driving performances behind a dominant run defense, which ranked second in DVOA and set a franchise record for yards per rush attempt allowed versus league average (-0.99).

Fatukasi’s general stats (27 tackles, seven for loss, three quarterback hits, one sack, one pass deflection) do not jump off the page, but that is the case with every player whose main role is to do the dirty work in the trenches. He was a high-impact force, helping to create a good number of easy opportunities for teammates.

This play encapsulates Fatukasi’s impact. He absolutely clobbers the center, knocking him so deeply and violently into the backfield that he knocks the running back down on his own. Fatukasi would not receive any box score credit for this play, as Henry Anderson wound up getting the tackle credit simply for touching the back as he sat on the ground.

Fatukasi also had plenty of dominant moments in which he did finish the play himself.

The best metric to showcase Fatukasi’s value is his Pro Football Focus run defense grade. PFF’s grading system can come to some dubious conclusions, but in this case, I think it is a great way to make it clear just how good Fatukasi was in 2019. Fatukasi received an 87.5 run defense grade, fourth-best among interior defensive linemen behind Cameron Heyward, Aaron Donald, and Mike Purcell.

It is hard to come up with much of anything to complain about regarding Fatukasi’s 2019 season. The most obvious gripe with his game is a lack of pass rush production, as Fatukasi tied for 108th at his position with just six pressures, but he is not expected to do much in that phase anyway. Run-stuffing is his primary responsibility, and he excels at it.

Nevertheless, if Fatukasi could develop into an average pass rusher — scratch that — even just a below-average pass rusher rather than a non-existent one, it would obviously take his impact up another notch. He does not seem to possess a wide array of pass rush moves in his toolbox. Perhaps adding some weaponry to his arsenal should be the focus of his offseason.

The best rush I saw from Fatukasi in 2019 was this filthy move against Miami in Week 14, leading to a hit on Ryan Fitzpatrick.

Then again, it was against rookie guard Michael Deiter, who allowed the second-most pressures among guards this season (44). Still, if Fatukasi can figure out how to produce plays like that one on a more consistent basis, he can make another leap.

Fatukasi came into the league as a raw player with immense potential thanks to his intriguing physical gifts. After what was essentially a redshirt rookie season, he made significant strides, fulfilling much of his draft day potential and emerging from a crowded pack of talent to make the team. He has already proven himself as a tremendous piece against the run, but there is still plenty of room for Fatukasi to improve in the passing game. Already establishing a track record of progression with the jump he made from year one to year two, there is reason to believe he has a good chance to take another significant step forward.

Even if that next step does not come, Fatukasi has already proven himself to be an excellent asset.