New York Giants quarterback Daniel Jones knows he must clean up the turnovers after racking up three in Sunday’s loss to Arizona.

Fans of the New York Giants must learn to be patient with Daniel Jones. With any rookie quarterback, you must understand that mistakes are going to happen and turnovers are going to occur. Jones is no exception, as he now has 11 turnovers on the year.

In the midst of the team’s 27-21 loss to the Arizona Cardinals on Sunday to drop to 2-5, Jones threw a pick (his seventh of 2019) and lost two fumbles (his third and fourth). Not the most ideal of numbers, especially when he’s only played in six games (five starts). After the loss, Jones portrayed the realization that he must clean up the sloppy mistakes.

“I think I’m making progress in some areas and still need to improve a lot in some others. Obviously taking care of the ball is a big thing and has been,” the rookie Duke product said. “So, to not do that today is disappointing and I have to get better there.”

Jones completed 22 of his 35 throws for 223 yards, one touchdown, and one pick. His lone score through the air was a 28-yard toss to Rhett Ellison to put the Giants on the board. It cut the Cardinals lead to 17-7 at the time.

Other scores for Big Blue came from a blocked punt recovered in the end zone by Elijhaa Penny and a seven-yeard touchdown run from Saquon Barkley.

The Giants will take on the Detroit Lions next Sunday for their Week 8 game.

NEXT: Dexter Lawrence Making A Case For Defensive Rookie Of The Year 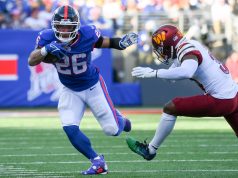