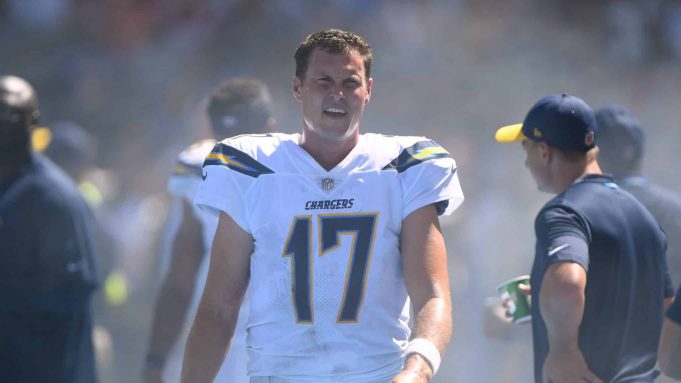 There are potential value plays at nearly every position for your daily fantasy football lineups this week, but don’t cut back on tight ends.

Bye weeks already? Week 4 is here and what a ride it has been so far this season. Calvin Ridley’s 3-touchdown explosion against the Saints last week has made him the top value play of the season so far ($3,700 salary – 43.50 fantasy points). This week is all about the value play and let’s take a look at the players who could have big weeks and pay dividends like Calvin Ridley did in Week 3.

The San Francisco 49ers defense have given up 32 points a game and allowing fantasy quarterbacks to average 25 fantasy points a game (six passing touchdowns). The Chargers will have no problem scoring the ball and Philip Rivers will have a field day. Mike Williams ($4,500) is a cheap player to pair with Rivers in this favorable matchup.

The Atlanta Falcons have given up 35.5 fantasy points to quarterbacks in the last two weeks. Andy Dalton was awful last week (four interceptions) and he still threw for over 350 yards and had two touchdowns. A.J. Green ($7,500) is the obvious stack with Dalton but if you want to get contrarian, double stack or just play Tyler Boyd ($4,600) who has 12 receptions, 143 receiving yards, and a touchdown on 16 targets in the past two weeks. Go all in on the Bengals this week.

David Johnson has faced three of the top-10 toughest defenses against running backs this season. DJ started the season priced at $8,800 and when a player of his caliber is this cheap, buy low. The Cardinals have made a change at quarterback with Josh Rosen and this should help DJ in the passing game. The team might have played it’s worst three games of the year and this will be the cheapest he will be all season. He will be low owned in tournaments so enjoy it now.

Sony Michel will be a popular pick this week on DraftKings. He’s going to be the lead back in the Patriot’s rush attack and at his price, he should be a lock in your lineups. The Patriots drafted him in the first round for a reason and the team will see what they have in him until Rex Burkhead comes back from the IR. Michel was a big-time playmaker in college and this game has some shootout potential.

Will Fuller has been unbelievable in the past two weeks. He’s averaged 26 fantasy points a game and this Indianapolis Colts defense has nobody that can slow him down. DeAndre Hopkins has three different injuries heading into this game and I’m not a doctor, but that doesn’t sound good. Will Fuller is the play this week and he has the upside to win you whatever tournament you enter in.

With Evan Engram missing at least this game, Sterling Shepard should be in your lineup. The Saints have struggled all season stopping a team’s second wide receiver (Calvin Ridley last week) and this game is projected to be a shootout. High upside this week for Sterling Shepard.

The Atlanta Falcons have allowed the 11th-fewest fantasy points to perimeter receivers this season. However, Tyler Boyd’s matchup with Brian Poole (Falcons slot cornerback) is enticing. Poole has given up the eighth most fantasy points to slot receivers this season. If Andy Dalton plans on putting up points this week, he will be looking at whoever is in the slot and that’s Boyd.

Don’t be afraid to break the bank for a tight end this week. The position as a whole has been awful this season and there’s no sense in taking a chance on a value play. Miami’s defense is overrated and in the last two meaningful games against the Dolphins, Gronk has averaged 27 fantasy points a game.

Carson Wentz showed last week that he is most comfortable passing to Ertz (10 targets) and that trend should continue. There is value at both running back and wide receiver this week where you should have no problem being able to afford at least one if not both Ertz and Gronkowski this week.

Marcus Mariota has had problems with his throwing hand and elbow all season and hasn’t passed for more than 105 yards in either start this season. The Titans offense has been awful this year and the Eagles defense should have no problem continuing that trend. Big day for the defending Super Bowl Champions.

Ryan Fitzpatrick showed last week, against an average defense at best in Pittsburgh, that Fitzmagic might be more Fitztragic this week. The Bears defense is too cheap to ignore, and they should have no problems causing havoc with the Tampa Bay Bucs offensive line.

NEXT: These Waiver Wire Adds Could Save Your Team From The Dreaded Bye Weeks