New York Giants vs. Minnesota Vikings is one of the more intriguing games on the NFL’s wildcard playoff round schedule.

Brian Daboll has turned the Giants into a quality team once again, snapping a several-year streak of missing out on postseason play. Meanwhile, the Vikings have their own first-year head coach in Kevin O’Connell, who will be eager to score his first playoff win.

The game is set to kick off at 4:30 p.m. Eastern time on Sunday and can be seen on FOX.

Over at Underdog, there are ways to get in on the action by making fantasy picks for the Giants-Vikings game’s player over/under stats.

What is Underdog and why should NFL fans care?

Underdog Fantasy is a new daily fantasy platform backed by investors such as Mark Cuban, Kevin Durant and Adam Schefter.

This isn’t what you might think about fantasy sports though. Through Underdog’s “Pick’em” contests, you can bundle a few selections of player prop picks similar to what you find at sportsbooks, and yes, you can put real money against these picks.

Underdog Fantasy is available in 41 states, so a lot of those states where sports betting is not yet legal? Yep, you can do Underdog Fantasy picks for real money, as we’re outlining here. It’s really fun.

If you want to get started, Underdog will match your first deposit up to $100 by clicking here or using promo code ESNY.

Let’s start with the Giants, specifically with QB Daniel Jones. In a Christmas Eve meeting between the Giants and Vikings in Minnesota (where Sunday’s game will be played), Jones had a big day, passing for 334 yards.

If the Giants are going to go into Minneapolis and win this time, Jones will need to have another big game through the air. I like his “higher” option on 240.5 passing yards.

To go with that, RB Saquon Barkley also played prominently in the receiving game against the Vikings on Christmas Eve, recording 8 catches on 10 targets for 49 yards. The Vikings did a good job of not letting Barkley get any big gains in the passing game, but Jones was clearly looking for his star running back often.

Considering the Vikings’ defense has been suspect all year long, I like Barkley’s “higher” option on 23.5 receiving yards.

On the Vikings’ side, let’s look at RB Dalvin Cook. The Giants have the No. 27 run defense in the NFL, allowing 144.2 yards per game to opponents on the ground. The league average is 121.6 yards per game.

Therefore, his over/under seems a bit low to me. Even though he only ran for 64 yards in the prior meeting, I like Cook’s “higher” option for 71.5 rushing yards.

How many picks should you make? 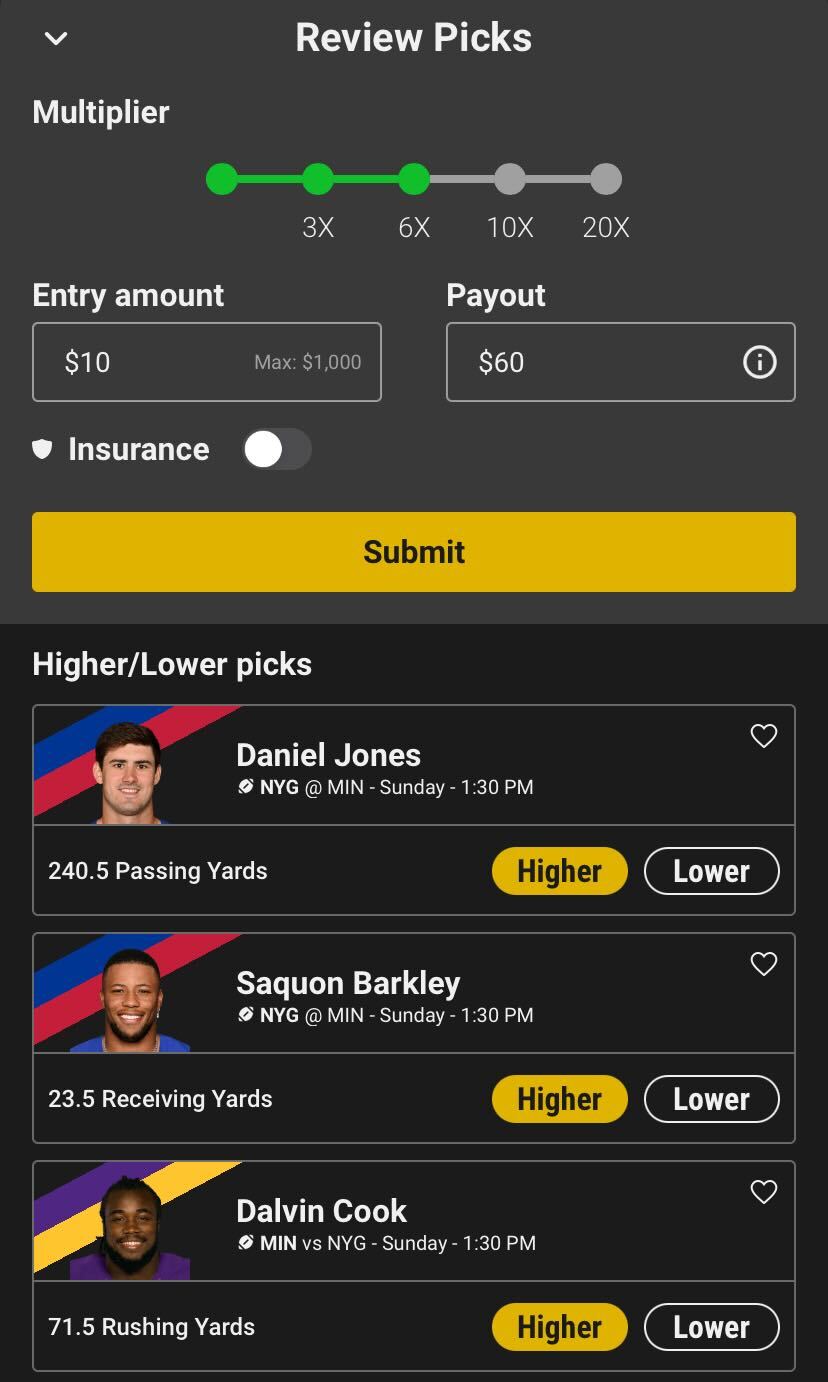 Can the Giants go to Minnesota and pull off the upset? They almost did it on Christmas Eve, so this game should be one of the more exciting games of the weekend. Get your bets in before Sunday!

Get started on Underdog by clicking here and make your picks for Giants-Vikings action or other CFB, CBB, NFL and NBA games. Using this link means Underdog will match your deposit up to $100. If you deposit $25, you’ll get an extra $25 to start playing right away.

Is a Giants-Tee Higgins trade realistic?