Folks, the kid’s even scarier on film.

Parents, tell your kids about No. 33. Kids, tell your parents you want that No. 33 jersey (in green or white). Fans, rejoice, hand-in-hand for your team, those New York Jets, have landed a generational National Football League talent.

As good as Jamal Adams was on Sunday — two tackles, one sack, two tackles for loss and a pass deflection — he’s that much better on film. In fact, he’s coach’s fundamental dream at safety. And in a league that does everything to favor the offense, allowing quarterbacks to dink-and-dunk at will via matchups, the safety is the one defensive position that makes all the difference in the world.

No longer is the stud edge rusher and shutdown corner the beast spots on defense. The safety is now that man, that position every general manager drools over.

We drooled over the kid early — April early, right after Mike Maccagnan graciously accepted the best talent in the NFL Draft in the six hole. Outlining his days at LSU, it was evident right off the bat that the kid could do everything. Literally, everything.

Jamal Adams is already one of the best safeties in the NFL. Can do it all, deep half, edge, centerfield and get after the passer. #Jets pic.twitter.com/snSd71gORu

Play centerfield? Check. Play deep half? Check. Cover a tight end or back out of the backfield? Check. Rush the passer? Check. Bring the wood when necessary? Check. Get dirty on special teams if asked? Check. Lead? Check. Showcase undeniable unexplained football IQ and a nose for the ball to dream of? Double-check.

Perhaps his best asset as a strong safety is what he does on the edge in the run game. At times, it’s simply astonishing. While it’ll never receive the hype a deep pass breakup or sack will turn out, a nice inside shoulder fundamental play will get the troops hyped.

On the second defensive play from scrimmage in the Jets 20-6 laughingstock win over the Miami Dolphins, Adams showcased his greatest talent — edge play.

On a 1st-and-10 after Jay Cutler picked up a first down through the air, the Phins went with a zone play to Jay Ajayi to the left. It’s a classic stretch play from the zone-blocking scheme of Adam Gase. Playing eight in the box out of a nickel, Adams perfectly executed his responsibility on the ground by taking the block on with his inside shoulder, squeezing it down and forcing Ajayi to not commit to either the C-gap or far outside:

What’s important about playing the edge in this situation is that you never want to commit one way or the other. While it’s your responsibility to make sure the play is turned up back to the inside and into the teeth of the defense, you also can’t commit too wide, as it would compromise the middle with too much space. Of course, if you squeeze it to the inside too much and lose leverage and edge responsibility, the back will gain the edge. This is the worst thing that can happen.

On this one, Adams is careful. He doesn’t commit either way and forces Ajayi to be apprehensive with the hole he’s attacking. Obviously, Adams makes the play for the two-yard loss, but that’s the last part of the puzzle. Everything leading up to it was picture perfect.

Ready to laugh? Check this out …

Two plays later, Bowles’s defense gets caught showing its hand. In a nickel, Cutler sees man-to-man and audibles. Instead of balancing it out with receivers on each side, the Phins ran tight end Julius Thomas ISO to the right. This put Adams on an island with Thomas:

You kidding me? A strong safety is not supposed to be able to cover in an isolated situation like that. It’s what makes this kid such a weapon in today’s game. He literally reverses the matchups. Instead of the offense owning a matchup advantage at spots (particularly TE or RB on SS), it’s the defense that dictates terms with a kid like JA33.

The following is another edge situation. In a 3rd-and-long, the Jets deploy a dime look. But they put Adams in the box with another safety over-the-top to go along with Maye. Adams’s positioning while defending this run is other-worldly:

The next play is yet another run support example. What might be fascinating to many is that he doesn’t even come close to making the play. That doesn’t mean he didn’t create the most impact on the play.

On a 1st-and-10, Miami went with some sort of power run to the right (with the left guard pulling). Watch what Adams does. He’s lined up in the box and puts himself in that edge perfect position to shed the block while squeezing the runner and forcing him to be indecisive with where he’s going to hit the hole: 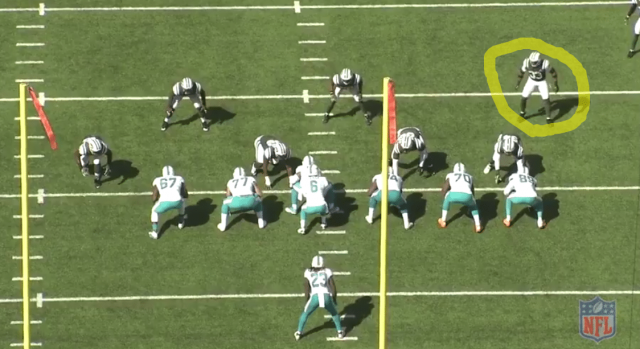 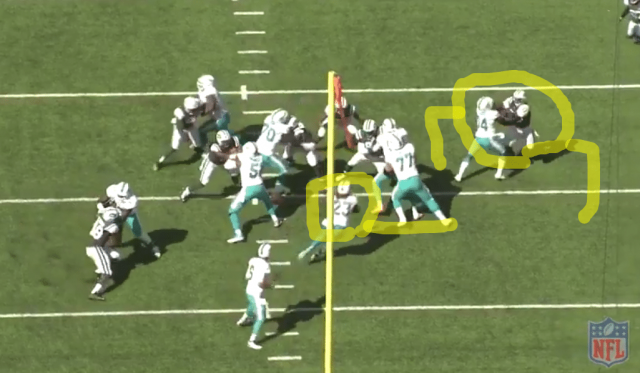 If Ajayi followed his guard and went up the C-gap, Adams would’ve been there. If Ajayi would have bounced it out, Adams would have shed the weak block and strung the play wide.

Interestingly enough, while the kid can easily play the deep half and centerfield, he didnt’ do much on Sunday. It was purely a game-plan decision.

Miami is a run-first offense. They rely on that zone-blocking scheme and look to out-hustle the front-seven. Adams was sniffing or in the box or even lined up on the line of scrimmage most of the day. The Phins looked at the NFL’s worst run defense and attacked even the most loaded of Jets boxes.

That was a big mistake.

When Adams did play deep, he still made his presence felt. The following was a 2nd-and-8 situation that saw Bowles rush four. Cutler thinks he’s sending extra pressure and leaves his tight end in to block. On the backend, the defense is running a version of a Cover 2 man under. Juston Burris, Morris Claiborne, Darryl Roberts, Buster Skrine and Demario Davis play man while Adams and Maye take deep halves.

Adams’s first read should be the tight end in this situation. Once he stays in to block, he should next turn his attention to the slot receiver. If he takes off down the seem, that’s all Adams to help out over-the-top, and that’s exactly what he does.

Check out how the play develops. Cutler escapes the pressure and Claiborne becomes a little relaxed on the outside. Adams recognizes immediately and flies over for one of his two pass breakups on the day:

On the next play, he picks up his first sack at the big boy level. This one was all relentless pursuit showcasing a high-motor: The frightening bit of news about this game film is that all of it came in one half — first half against Miami.

Through three games, trends are now developing in relation to this Jets defense. For starters, Bowles is no longer playing too heavy on passing situations.

In the past, we’ve gotten all over the head coach for deploying nickel looks when a dime or quarter is more prudent. There’s just no reason to leave two sluggish inside linebackers in the game when the offense is in a 3rd-and-long. It doesn’t matter if they aren’t showing four wideouts.

Yes, we can still be worried about the run defense. At the same time, it’s also safe to say that the unit looks much more in-tuned than it did when all integrity was lost with Sheldon Richardson counting for one too many interior defensive linemen.

Most importantly, the top trend of the day comes when we truly understand how dangerous the Jets are when the opposition is in 3rd-and-long. What Bowles is doing is throwing an extra safety in the game to go along with Maye (two over-the-top), playing three or four corners, and allowing Adams to mix-it-up with the opposing offensive linemen. Having Adams playing so close to the line of scrimmage provides a look that is 100 percent undetectable.

Offenses will never know what he’s going to do. He can rush the passer, drop in a hook-to-curl, play the flat, or even spy the QB. In this spot, he’s a one-man matchup destroyer.

If you saw Adams’s stats from Pro Football Focus, you saw that they had him lined up at “linebacker” at times. It isn’t linebacker. Pay no attention to those geeks over there. He’s a safety who is now appropriately being used in the box on definite passing downs.

Pinch yourselves Jets fans. It’s real. And with Adams playing alongside another tremendous talent in Marcus Maye, the duo on the Jets backend can easily finish 2017 as the league’s best. It doesn’t matter that they’re rookies. Safety is a position that is solely read-and-react. Football IQ is demonstrated at this position through reacting, not thinking. The rookie curve isn’t the same as other spots on the football field … like quarterback, for example.

Earl Thomas better be enjoying is final weeks in the NFL as the league’s top dog as safety (strong or free). Jamal Adams is already closing in on that throne. We just have to be careful and force him to earn it first.

No worries there. He certainly will.

NEXT: Can Jets Find Offensive Version of Jamal Adams in 2018?