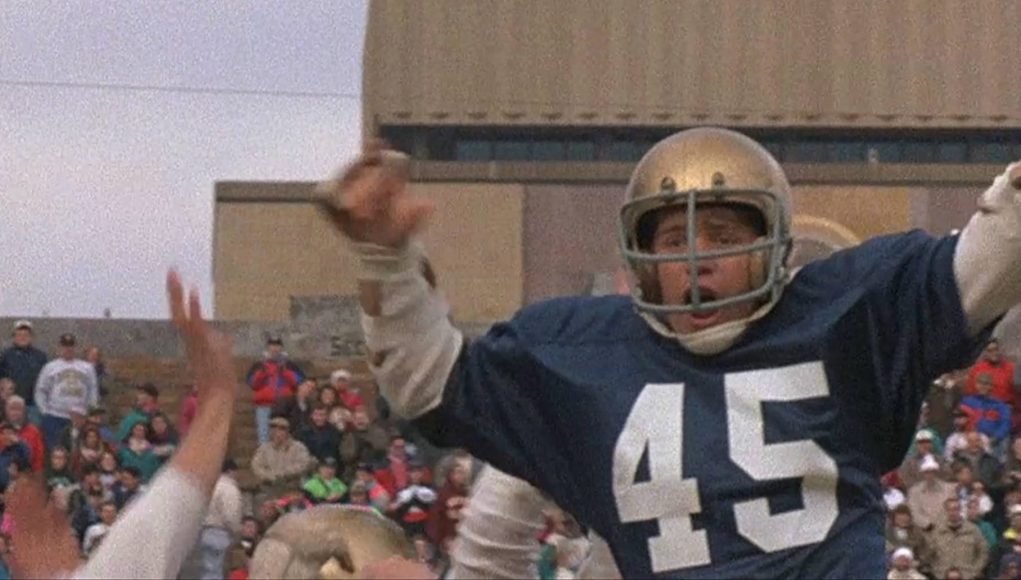 There are too many classics to count, but we take our best stab at the 11 greatest sports movies of all-time; Rudy, Rocky and more.

There’s just something about sports and cinema that blend all too perfect. We don’t know why this is the case, we just know it exists in our world.

Sports and television have always come together like two peas in a pod, as the National Football League knows all too well over the last half century, using it to its advantage better than any league has. While the great Wellington Mara can be thanked for that one — selflessly agreeing to TV revenue sharing — the point that the screen and sports are made for one another holds true.

When you take sports off the small screen and, instead, use the big screen, magic happens. It may happen in the form of a real story or a narrative completely fictional. Either way, a dramatic tale unfolds before our very eyes over the next hour or two, or three.

Here are the 11 greatest sports movies of all time along with a large notables section to quench that argumentative thirst:

Listen, sue me. We did put entirely too many sports movies in the notables section. But can you blame us? Look at the list. At least you have them all listed in a nice fashion in an attempt to scrutinize the top 11.

Martin Scorsese’s “Raging Bull” tops the notables list and while many will view this as a crime, we have our reasons. As a film, it’s one of the finest pictures of our time. Robert De Niro’s Oscar-snag for leading actor still ranks among the greats. For us, though, it doesn’t fully fall into that “sports” category of movies. Yes, it is a sports movie, but so much about it revolves around Jake LaMotta’s life rather than his boxing career. For that and only that reason, it falls in the notables.

The same can be said for movies like “The Fighter,” “Remember the Titans” and “Jerry Maguire.”

Comedies such as “Tin Cup” and “Happy Gilmore” fit the bill if you’re looking for a laugh, but can’t touch the top 11 in terms of pure sports entertainment.

Coming in at No. 11 is ebony and ivory, ying and yang, the brash and the secretively brash. “White Men Can’t Jump” has always been about more than just basketball. As a film, it touches on such a strong aspect of sports that is rarely explored via cinema: race.

“Field of Dreams” has always suffered through a bi-polar reaction since its release. Some people love it. Some people absolutely can’t stand it. These are those who can’t take the unrealistic nature of the movie.

If you don’t enjoy Field of Dreams and especially the last scene when father and son play catch while trying to hold back emotionally, you simply may just be a terrible person. If you don’t sob like a little baby during that final scene, well, I don’t want to make your acquaintance.

As the second greatest sports comedy of all time, there are too many cult heroes to count from “Slapshot.” Not only did the movie provide us two sports — ice hockey and bare-knuckle fighting — it brought along the Hansen Brothers, the trio of fearless brothers who’ll never die within the hockey culture.

I was introduced to the story via print, but the movie is just as phenomenal.

It cannot be an easy thing to do: produce a movie about the single-greatest American sports moment of our time, but that’s exactly what director Gavin O’Connor did. Kurt Russell as Herb Brooks was so spot on that we’re all sure Al Michaels was ready to shout it out again as he sat somewhere in that theatre near him, “Do you believe in miracles? Yes!”

Sometimes, although you don’t know it, high school football players are treated like gods. Again, it’s another story I was introduced to by book first, but the movie (which came out decades later), was just as great.

This true story follows the 1988 Permian Panthers, the ups and downs, the thrills and bitter disappointments. What strikes a cord with many moviegoers was the all-too-bitter, yet inspiring conclusion.

While it’s true that sports comedies usually take a knock on lists like these, the greatest sports comedy of them all, “Caddyshack,” simply stands alone. The stories are endless and classic. From Rodney Dangerfield to Bill Murray, Chevy Chase and that adorable little freaking gopher, Caddyshack is the gold standard of sports comedy.

“Rocky, Rocky, Rocky …” It’s the chant that’ll last a lifetime. Sylvester Stallone’s gamble to not sell his “Rocky” script and eventually produce it without major changes proved to be a career-defining move. To me, it’s just impossible to separate the first two Rocky installments. To some, “Rocky IV” also deserve mention on this list.

Rocky II absolutely brings us the best scene of the entire franchise with just one word from Adrian: “win.”

“What are we waiting for?!”

Kevin Costner as an over-the-hill minor league catcher, Tim Robbins as the hotshot pitcher with all the stuff and no brains, and Susan Sarandon as the woman who molds these youngsters her own way … how can it get any better than that?

“Bull Durham” is the greatest baseball movie of all-time and it’s not even close. The purified nature of the setting, a North Carolina A-ball struggle, hits home for many baseball purists.

Remember when we chanted “Rocky, Rocky, Rocky …” Well, there’s more chant involving the underdog and it begins with the very same letter.

“Rudy, Rudy, Rudy …” Unlike Balboa, though, Rudy was afforded just three plays on the football field. Granted, the movie turned out to be much more famous than the actual event, director David Anspaugh hit all of the right notes in this feel-good, underdog tale.

Speaking of director David Anspaugh, he not only takes the No. 2 spot on our list, but the top spot of ’em all with his 1986 classic “Hoosiers.”

What’s similar about both Rudy and Hoosiers is that excellent, unique music coincides with underdog stories that finally hit that climax near the end of the film. In Hoosiers, the climax comes when Jimmy Chitwood demands the ball and wins the Indiana State Championship in epic fashion for his 8-man squad with an ailing character played by Dennis Hopper jumping for joy in his hospital bed.

Gene Hackman playing troubled yet brilliant head coach Norman Dale is the catalyst for everything else that transpires through the setting of this rural, small-town story.

“Welcome to Indiana basketball.” Hoosiers is the greatest sports film of all-time.

NEXT: Mets Now Healthy Enough To Be the Real Deal