It’s happening, again. Instead of discussing a brilliant move on the part of New York Jets head coach Todd Bowles, we’re speaking on the extremely disappointing topic of allowing personnel to be played out of position.

Earlier in the season, the players who were targeted as part of this conversation were Calvin Pryor and David Harris. Bowles failed to make sure Pryor stayed away from tough outside one-on-one matchups. He also failed to go lighter with his defensive backfield and go six or seven DBs in favor of taking Harris off the field in certain sub-packages.

Despite overwhelming evidence from 2015 that suggested he could not take on an edge/roaming type position, Bowles has, incredibly, thrown him right back into this vulnerable spot. The near 300 lbs. lineman simply can’t do anything in the open field. It’s not his fault. No 300 lbs. football player can do what Bowles is asking of him.

It all stems from a logjam at the defensive line spot — specifically, the interior defensive line. This is why everybody believed either Richardson or Muhammad Wilkerson had to eventually be shipped out of town.

During the Super Bowl era, the two defensive fronts that have remained superior have been the 4-3 and the 3-4. The 3-4 fields three interior defensive linemen, while the 4-3 has room for only two.

Yet Bowles is trying to fit an incredible four into the mix.

Richardson, Muhammad Wilkerson, Leonard Williams, and Steve McLendon are all starting the four-man defensive line for the Jets. This means all four of the Jets linemen are big heavies — instead of showcasing a balanced line of two heavies and two speedy edge guys. Therefore, when an offense is preparing to face the Jets, they know speed on the edge won’t kill them. All four guys are the same exact player and can be handled as such.

Take David Johnson‘s 58-yard touchdown in the first quarter of Monday Night Football as a prime example of how ridiculous a setup this truly is. Trying to force all four interior guys on the field (and looking to compensate for David Harris‘ loss), Bowles actually deployed a look that had Richardson plugging the A-Gap from an inside linebacker spot: 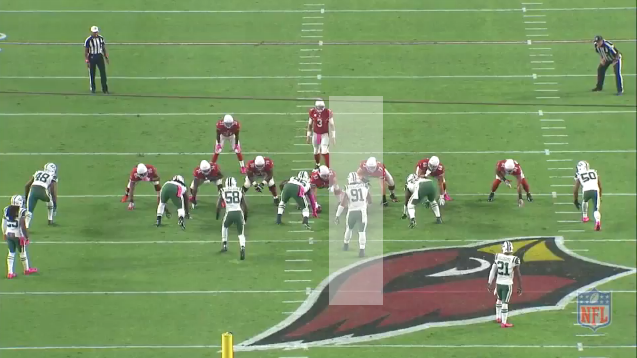 Although the result of the play was disastrous, this isn’t even close to the worst example of Sheldon being placed out of position. In theory, Richardson simply acted as a defensive tackle plugging the A-Gap, despite his pre-snap look as an inside linebacker. But because he blitzed, there wasn’t anybody on the second-level on the wide side of the field, allowing Johnson more room.

The next play demonstrates Sheldon playing out of position on the edge, somewhere he shouldn’t be: 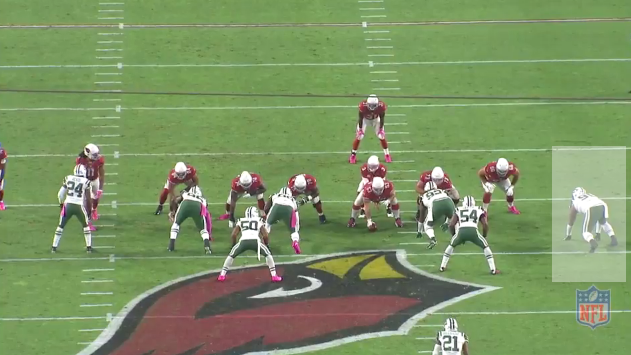 The result turned into an offside:

Richardson, similarly to Wilkerson, should not be playing along the edge, a position reserved for lighter, quicker defenders.

The next play illustrates Richardson’s lack of quickness along the edge:

Bowles came with the five-man pressure. Richardson was tasked with rubbing the tight-end and rushing the edge. Arizona countered by not even paying attention to big Sheldon. And appropriately so, as his big frame is entirely too slow from the edge, a place that needs speed.

The next quarter, yet again, the heavy four-man front came to destroy the Jets defensive integrity:

Richardson’s responsibility here is to defend the edge and make sure nothing gets wide of him. He needs to funnel whatever he sees along that edge inside.

Clearly, he’s not nimble enough to get it done.

All of the game tape you’ve seen came from just the first half of the Jets 28-3 loss to the Cards. Not to mention, there are too many times Richardson or even Wilkerson are seen covering the open field in the passing game.

This big four-man front does not work. It’s that simple. It leads to a very vanilla defense that forces Bowles to play a tremendous amount of Cover 1 (man underneath with one deep safety). This causes a chain reaction that sees Pryor and/or Harris taking guys in one-on-one spots that crushes the defense’s spirit.

What Bowles needs to do is ditch the heavy line immediately. He needs to make sure no more than three of the four heavies (Sheldon, Big Mo, Big Cat, McLendon) are on the field at once. It’s understandable to see Richardson or Wilkerson on one of the edges. Due to the personnel, Mike Maccagnan has provided, there’s an obvious imbalance there. But Bowles has to make sure both edges aren’t too heavy — what we’ve continuously seen up to this point in the dark season.

Bowles has to get lighter. He must find somebody to play the nose tackle position in conjunction with McLendon. That way, all three of the studs can play the interior while Lorenzo Mauldin and Jordan Jenkins take their appropriate place on the edge.

This is the only way opposing offensive coordinators won’t be able to so easily expose the slow Jets wide of the hash marks.

Dominant players such as Muhammad Wilkerson and Sheldon Richardson are dominant because they use their speed and quickness against offensive guards amid the ugliness that comes in the trenches. They’re far more affective out-quicking an offensive guard rather than out-powering an offensive tackle.

It’s not their fault. They’re not quick enough to play the edge. How Bowles hasn’t recognized this up to this point is not only mind-boggling, it’s downright stubborn.

NEXT: Neither Romo Nor Rivers Is Right For The Jets