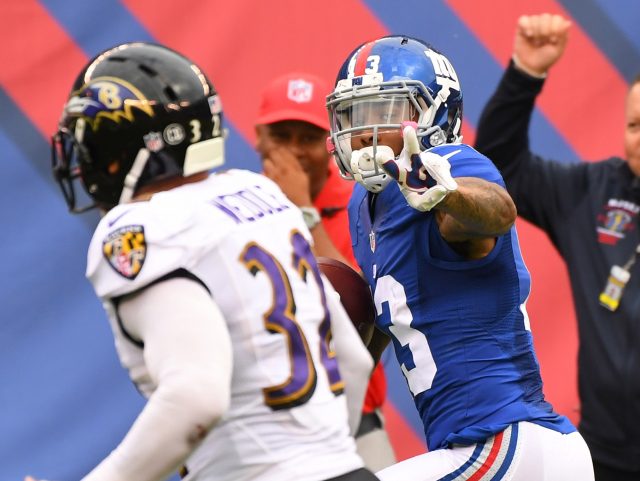 I suppose some fans like this stuff. They must, right?

I mean, aside from the little kids who get a kick out of it, there have to be a few adults who love the crazy antics and unfortunate immaturity that costs his team penalty yards during the most critical times of the game.

Immediately after torching the Baltimore Ravens for the game-winning touchdown, Odell Beckham Jr. took his helmet off in the end-zone. This cost his New York Giants a 15-yard penalty on the ensuing kickoff. Baltimore was then able to return the kick beyond the 30-yard line.

In the end, it didn’t cost New York the game. But still, the point has to be hammered home: actions like this hurt the team and whether or not the chickens come home to roost isn’t the point.

Beyond all of that came OBJ’s continued love affair with the kicking net. Not once, but twice Beckham enjoyed further antics with the net:

Odell Beckham Jr just proposed to the net after another long TD, and it said yes ? pic.twitter.com/FXjfCc8VnK

We get it already, OBJ. The damn kicking net attacked you earlier in the season and you’re turning around to be a fun thing.

Guess what, though? None of it matters. Only when you hurt your team with silly penalties does that extra immature stuff come to factor in the deciding factor of the game.

What really matters is your play on the field:

Just like that, the Giants get up 17-13 on an Odell Beckham Jr. explosion. (More kicking net fun to boot.)#GiantsPride #NYG pic.twitter.com/5eax9CyQH6

Enough already. Allow your talent to do the talking.