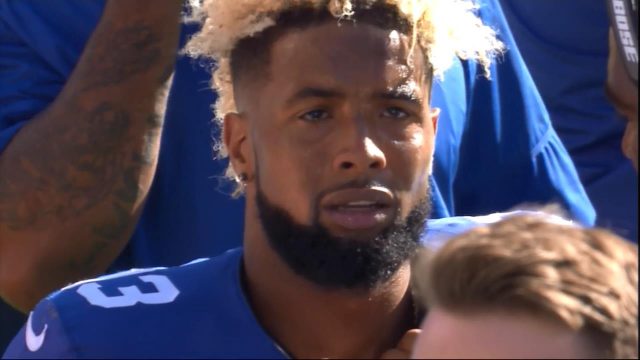 Odell Beckham Jr. is a complete stud NFL player. When the ball is in the air or in his hands, electricity happens.

At the same time, his emotions get the better of him at times and we see it affect his play. We’ve seen good, great and bad from OBJ on Sunday up to this point.

Early in Sunday’s game against the Washington Redskins, Beckham became the fastest every to reach the milestone of 200 receptions. He did this in just 30 games.

Hauling in two receptions in the first half just led to an electric second half as OBJ has since caught five more balls for a combined 121 yards on the day.

After an Eli Manning interception, a play that Will Tye should be suspect No. 1, Beckham lost it on the sideline. He slammed his helmet into the kicking net which fought back against his head:

He was also spotted with tears in his eyes shortly thereafter:

On the next Giants drive that eventually led to Josh Brown’s go-ahead field goal, Beckham dropped an 8-yard comeback.

The score currently stands at 27-26 in favor of the G-Men with just over seven minutes to go in regulation.