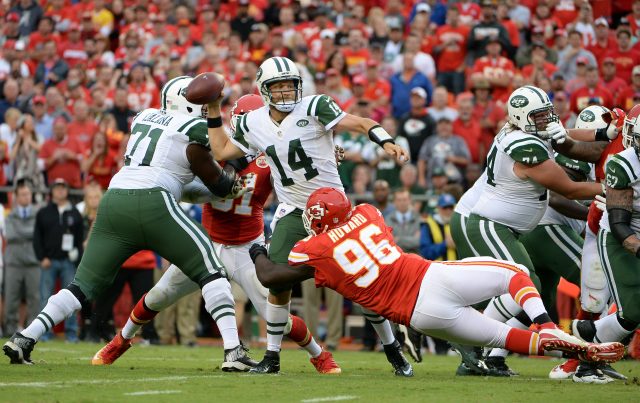 The worst part about Sunday afternoon wasn’t the six interceptions. It wasn’t even the two critical tipped interceptions in the end-zone.

The worst part about Sunday was the lack of actual dissecting of the defense by Ryan Fitzaptrick.

As most are aware, Fitz and Gailey thrive off a pre-snap read and quick-react system. Fitzpatrick scans the defense pre-snap and pretty much already has his mind made up on where he’s going to go with the ball once Nick Mangold snaps the pigskin.

This is fine … as long as it’s not the majority of the play calls.

Bob Sutton and the Chiefs were all over it. Gailey needed to mix in more seven-step drops and Fitz needed to demand it for himself. This is the only thing that would have seen success based on the way K.C.’s defense game planned.

Take a look at this incompletion as an example. The Chiefs were in a classic 2-man under, press look. Instead of allowing the play to develop, Fitz predetermined where he was going to go with the ball:

Fitzpatrick looked to take advantage of Quincy Enunwa against a strong safety, No. 38 Ron Parker. Instead, he should’ve allowed the play to develop more. If he did, he would have seen that a wide-open Brandon Marshall beat his man on a slant.