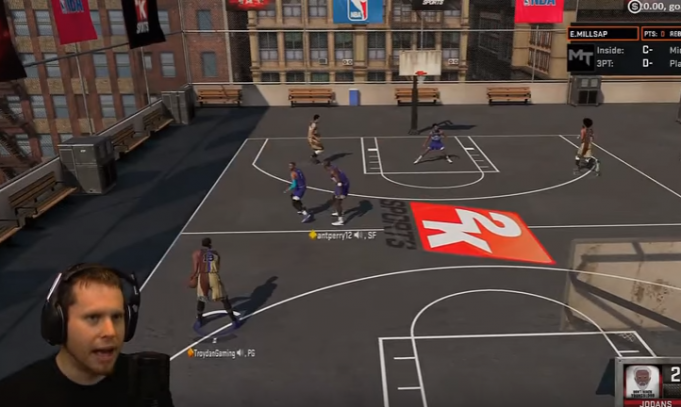 Troydangaming is a widely successful sports gamer who broadcasts on Twitch and creates videos for YouTube.

Troydan is a full-time Twitch streamer who also posts videos on YouTube. He mainly plays the NBA 2K franchise, but plays all types of video games.

Currently having over 400,000 subscribers on YouTube, many consider Troy as one of the funniest personalities in the sports gaming community. He is a creative genius when it comes to ideas for his videos and is great at editing.

Between broadcasting on Twitch daily and posting videos on two different YouTube channels, Troy is a very successful individual who deserves every ounce of his success with all of his hard work and motivation.

Troy was nice enough to take time out of his busy schedule and conduct an interview with us.

Patrick Hennessy: What made you launch your first broadcast on Twitch? How long did it take until you started to gain a following?

Troydan: I used to stream on Justin TV, like prank calls and stupid stuff like that. I was playing World of Warcraft at the time and kinda wanted people to watch what I was doing, I didn’t know much about Twitch so then I started streaming and I did pretty good. It didn’t take too long to get a following, I advertised my stream quite a lot in the game so that definitely helped out but it probably only took a couple of months.

Troydan: Well, I remember quite specifically as a kid I turned on the TV, I think I was about eight years old and I said whoever wins this game, I will be a fan of that team. It was the Los Angeles Lakers playing I have no idea but the Lakers won, so they were my team. In fact, I also had NBA Courtside 2: Featuring Kobe Bryant for the Nintendo 64 which also played attribute to me being a Laker fan.

Patrick Hennessy: If you had the power to bring any three things to the NBA 2K franchise what would they be?

Patrick Hennessy: Two main people who are featured on your broadcasts and videos frequently are Zesty Jalapeno and DonJ. How did you meet these two?

Troydan: I don’t know how I met them, I think we usually bring people in at random into my PlayStation parties, and I think they just showed up and kinda stood out. DonJ, of course, is quite an interesting person I’ll say, he’s a young kid with a bit of an attitude on him but I think he’ll be something special when he’s older.

Patrick Hennessy: What is life like for Troydan when he is not broadcasting on Twitch or making videos for YouTube?

Troydan: There is no life beyond that, at all…

Patrick Hennessy: If you could pick any person in the world to sit down and play a game of NBA 2K with, who would you pick and why?

Patrick Hennessy: You have built up a massive following… With a lot of fans, have you ever ran into any in real life? If so, what was it like?

Troydan: No, I haven’t seen any of my fans in real life… I live in Nova Scotia, very rural area. These people have no idea what I do. There have been a few situations in the gym where I’ve seen some people look at me like I think they are going to approach me but maybe I scare them off, with that angry face I usually make at them.

Patrick Hennessy: What were the biggest obstacles that you have had to face being a streamer?

Troydan: Constantly being talkative as a gamer, I traditionally like to sit back and game and not really talk into a microphone, that’s one thing. I think a lot of people that start off at streaming have a hard time getting used to that, always being attentive to your chat and always talking. But you don’t want a bunch of dead silence, nobody wants to watch that. So I guess that was originally was my biggest obstacle, a lot of it comes pretty natural, though.

Patrick Hennessy: Out of all of the videos you have uploaded to YouTube, do you have a favorite? If so, why is that your favorite?

Troydan: Oh lord, I have a lot of videos… I have to really think hard about that, I don’t really have a favorite but some of the videos that stick out are the MLB glitches with the bat boy, those are my favorite videos. The trash talking videos are pretty good as well.

Patrick Hennessy: What do you think you would be doing as a job if YouTube and Twitch did not exist?

Troydan: Probably what I was doing before, awful jobs… I did not enjoy my job before. I sold car insurance before this and I am very thankful to be where I am today doing something that I’d be doing anyway. At least I get paid for it now.

Patrick Hennessy: Do you play video games differently when you are not recording?

Troydan: Oh yeah, of course. Well, when I play video games streaming or recording I have to be talking, I have to be hyped up and energetic… When I play alone, none of that happens. I’m laid back, my eyes are barely open… completely different experience.

Patrick Hennessy: Where do you see yourself five years down the road?

Troydan: I don’t know dude, I don’t see that far ahead. Probably making YouTube videos, probably still streaming, It’s hard to say what technology will be available at that time but I don’t think it’ll be too much different then what I’m doing right now.

Patrick Hennessy: Many of your followers are young and look up to you. Did you ever imagine that you would have people looking up to you?

Troydan: No, and I don’t know why there are so many kids that seem to watch my streams and my videos. Like, young kids… Back when I streamed World of Warcraft almost everyone was over the age of eighteen. Now that I stream sports related games like NBA 2K, everyone seems to be under the age of sixteen. There are kids as young as eight and nine that watch me, It’s kind of crazy, I should probably watch what I say.

Patrick Hennessy: Do you have any experience in playing any sports as a child? If so, which one was your favorite to play?

Troydan: I played a lot of sports as a kid, from baseball, soccer, curling, but I never played a lot of basketball as a kid. That didn’t happen until like high school, I only played for my school grades 10 and 11. Then I broke my hand in grade 12 punching a girl’s locker room door over a fight at lunch time. The sport that I did the most, unfortunately, as a kid, was curling. I curled for seven years… Those were some of the most interesting times, curling, but it wasn’t the manliest sport, I’ll be honest.

Patrick Hennessy: Being that you are from Canada, are you a big fan of the Toronto Blue Jays?

Troydan: Yeah, the only team I cheer for is the Toronto Blue Jays… I stopped watching baseball for a long time because it’s hard to watch your team lose, and the Blue Jays had a lot of rough seasons… but things are really looking good right now, we got a great team… Of course Josh Donaldson winning the MVP last year, the Blue Jays making the playoffs for the first time since, I believe what? 93? It was the first time I got to see them in the playoffs and it was great watching that. Unfortunately, they did get eliminated before the World Series but this season is looking good.

Patrick Hennessy: What age did you start playing video games? What’s the first game that you remember playing?

Troydan: I remember playing video games as far back as I can remember. My mother had a ColecoVision and that was the first system I ever played… I might have been like two years old. I played adventure for the ColecoVision, that was the first video game I ever played. The first console that I ever owned myself was NES, the regular Nintendo… and I remember specifically getting three games, Super Mario Brothers, Ninja Gaiden, and Urban Champions. I remember playing the crap out of Super Mario as a five-year-old kid.

Patrick Hennessy: If you were NBA commissioner for a day, what would be the first thing that you would do to change the NBA?

Troydan: I’d be a little bit more strict on flopping. I know they have charges for flopping but I think they could be a little more aggressive with that. I think flopping is a huge issue in the NBA and I think it’s a huge issue in some sports like soccer, for example, that’s a huge problem there. I don’t know how I would change it, maybe fine them more. But flopping needs to go.

Patrick Hennessy: Have you ever been to the United States? If not, would you want to visit the U.S.?

Troydan: I don’t have a passport, unfortunately, but I am going to get it here, I promise… But I was in the states once as a kid, I was in Maine driving through Toronto to Maine to Nova Scotia, back then you didn’t need a passport as a kid, now you do. But I will get my passport soon and hopefully I can make a few Laker games and get to the Staples Center.

Patrick Hennessy: What is your all-time favorite game?

Troydan: My top games I always say are Zelda: Ocarina of Time, Grand Theft Auto: Vice City, and Super Mario 64. I don’t know what I can put at number one, most likely Zelda. I played the crap out of that as a child but I liked a lot of the games on Super Nintendo and the Nintendo 64. Those are my two favorite consoles.

Patrick Hennessy: How did you come up with the name you go by, “Troydangaming?”

Troydan: Well, the account Troydan on Twitch was banned, unfortunately. The reason is because I used to stream on Justin TV and my account got banned. It shouldn’t have been banned. I used to troll people with that account and so many people reported me on Justin TV for trolling, that I got banned. I had the ban lifted once but then it happened again, and back then I did not care about Justin TV enough to keep asking to get unbanned. But then, of course, Justin TV turned into Twitch, and that carried over. So I had to make a new account. Troydan was my username. I’ve had that since a kid… I made that username I think when I was eight years old at a library. I was trying to make a Hotmail account and the name [email protected] was taken, of course my name is Daniel, I was amazed at eight years old that my name was taken, but I had a friend there… his name was Troy, so first I tried [email protected] and that was taken, so I took his name Troy and put Dan and that was not taken thankfully, and I’ve been using that name since I was eight, about twenty years ago.