Even with the logjam of defensive lineman in the New York Jets locker room, Mike Maccagnan did the right thing by franchising Muhammad Wilkerson.

Last summer, as the New York Jets took the field during NFL Training Camp under the spotlight of a brand-spanking new regime, questions surrounding the future of stud defensive lineman Muhammad Wilkerson were plentiful.

The man was entering the final year of his rookie contract that was severely underpaying one of the better defensive players in the league.

Fast-forward to March of 2016 and the story is now complete – at least for one more year. And these Jets just made the right decision.

According to Kimberly Jones of NFL Network, the Jets will, indeed, place the franchise tag on Wilkerson.

NYJ will place franchise tag on Muhammad Wilkerson by 4pm Tuesday deadline, according to someone with knowledge of team's plans.

The tag will provide Mo with a guaranteed $15.701 million for the coming season. While it’s not the long-term security Wilkerson has been constantly seeking, this payday is a more deserving number in contrast to the salary he was earning through his rookie contract.

The decision comes on the heels of the All-Pro breaking his leg in the final game against Buffalo, and despite the Jets already feeling incredibly deep at the position.

This is especially the case in a hard salary cap league. Teams find it very difficult to commit so much money at one position, and with Richardson, Williams and Wilkerson, the Jets seemed to be one too many.

The one difference between Wilkerson and the other two is quite simple. Big Mo is a flat-out stud.

Playing all 16 games in 2015, Big Mo played his way to the status of “Jets best player.” He collected 12 sacks (mostly from the interior spot), posted 39 tackles, and deflected seven passes. Whether it was a run-stuffing situation or needing pressure on the outside, Wilkerson was there for the Jets in every spot needed.

Wilkerson’s a beast. While Richardson has shown flashes of beastly play in the trenches, his off-the-field issues are a burden to everything sensical. He simply cannot be counted on, and considering he’s entering the final year of his rookie deal, one more year of evaluation won’t hurt anybody.

Williams will be entering his second season as a pro. He’s still years away from unrestricted free agency and isn’t going anywhere.

In essence, this move comes down to holding onto “assets.” It doesn’t come down to making sure Wilkerson will be a part of the Jets in 2016.

Franchising Wilkerson was the only move here. It still allows them flexibility as fielding trade offers before and during the draft remains a high possibility. He’s such a stud that keeping him around for another year would never be problem, yet fielding offers for the guy due to such a surplus at the position is also very wise.

The harsh truth for Wilkerson is that his situation is still unsettled. It’s unsettled, unfortunately, due to Williams slipping to the No. 6 spot in last year’s draft.

What Maccagnan really did here was delay the Wilkerson-Richardson decision for one more season. There’s no question who the better player is, it’s that the question of which situation suits the organization still remains.

He’d trade Big Mo away only if he’s blown away by a king’s ransom in return. If that doesn’t happen, the trio of defensive studs will be playing for the Jets in 2016, and at this exact time next year the real decision will finally be made.

The balance between interior defensive lineman and edge rushers is non-existent for Bowles’s defense at the moment. Franchising Wilkerson allows Maccagnan more options in seeking a better balance. 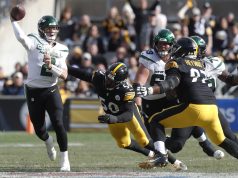