WFAN 660’s afternoon-drive host, Mike Francesa, explains what an Emoji is to a caller in a way that has college professors drooling.

For anybody who regularly listens to Mike Francesa during the afternoon’s on WFAN 660 AM, this one’s for you.

It could the President of the United States, it doesn’t matter.

So for once, when listening to the man discuss something where, for him, words are hard to conjure, we take great pleasure from it.

When explaining what an emoji is to a caller – in response to Sacramento Kings big-man DeMarcus Cousins posting a cryptic three-emoji Tweet recently – Francesa so delicately explained it.

Among his blatant stuttering, Francesa said this:

“What is an emoji?” Francesa replies incredulously, before struggling to explain what it is. “It’s a little thing on your computer. Like a little guy, like, uh, if you get, if somebody sends you a message. Do you have a text message? When someone sends you, like a thumbs up or something like that? You know how someone does that? That’s an emoji.”

We are none the wiser now. 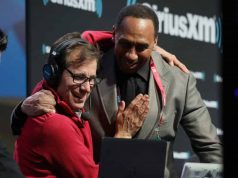 We have more details about Arena Football League’s revival