Our general rule of thumb with the NFL: In any given year, there are a few elite teams, a few horrid teams and then a massive pack in the middle that will win 6-10 games based on schedule strength and the breaks they catch, good or bad.

The Giants have gotten some good news on the former front. Sports Betting Dime, our sister site in the Great White North, has calculated each NFL team’s actual strength of schedule prior to the 2022 season, eschewing the traditional formula that only racks up 2021 records. And the Giants have the league’s second-easiest schedule according to SBD.

Good news, right? Yes. But there is a big but. SBD has also assessed win probabilities. And why it has the Giants finishing 7-10 — which would be a real improvement from past seasons in Year 1 of the Brian Daboll/Joe Schoen era — it also has Big Blue with a sizable downside. SBD gives the Giants about a 57% chance to finish under its 7.5-win total this season.

We still have plenty of time to go deep on the Giants’ schedule before the regular season begins. But the cliffnotes take: They should be 2-2 when they head to London to play the Packers in Week 5. That’s where things are going to get dicey.

The Green Bay game is followed by the Ravens in Week 6 (no open date after the international game), at the Jaguars in Week 7 and at the Seahawks in Week 8. That is a lot of wear and tear in a short period. And then they’ve got five division games and the Colts waiting on the back side of the schedule.

The Giants probably need to be 4-4 after eight games to have a shot at pushing seven or eight wins. That will not be easy. And even if they do it, there’s no guarantee they will win three or four in the second half. 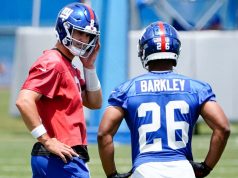