Bratt is the Devils’ Player of the Week after a particularly phenomenal game against the Oilers.

The New Jersey Devils have been playing better as of late, but hit a brick wall in Week 22. They visited the Vancouver Canucks, Calgary Flames, and Edmonton Oilers and lost 6-3 each time.

Poor goaltending and defense as well as constant lineup changes resulted in these losses and although the competition was tough, the Devils should’ve done better, especially in their own zone.

No Devil was great in all three games but, as has been the case for most of the season, Jesper Bratt stood out amongst his teammates.

This was a strange week for Bratt. He didn’t play well against the Canucks, was unremarkable against the Flames, but went on to play what was probably the best game of his career against the Oilers.

He was all over the place in that one, scoring two goals and notching an assist while playing a fantastic defensive game.

He wasn’t great offensively in the previous two games and was uncharacteristically terrible defensively, but turned it around on Saturday.

Bratt’s ability to adjust to playing with different linemates is something that shouldn’t be swept under the rug, either, and everything about his breakout season has been remarkable.

Our captain doing what a captain does. pic.twitter.com/18GqxWWljB 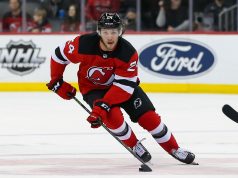