We have a lot to catch up on after a ridiculous weekend in sports.

If you unplugged for the weekend, please have a seat. A lot has happened in the sports world, including a return of one of the most hated athletes in New York history. Let’s skip the small talk and dive into the weekend.

Tom Brady’s retirement lasted about five minutes. The best quarterback of all time and one of the most hated figures in New York sports history is back, citing “unfinished business.”

These past two months I’ve realized my place is still on the field and not in the stands. That time will come. But it’s not now. I love my teammates, and I love my supportive family. They make it all possible. I’m coming back for my 23rd season in Tampa. Unfinished business LFG pic.twitter.com/U0yhRKVKVm

At least he’s in the NFC and the Jets won’t have to deal with him until the Super Bowl. Welcome back Brady, I guess.

Championship Week came and went in college basketball and there are three local teams dancing. Rutgers survived the bubble and will play in the First Four on Wednesday night. If they beat Notre Dame, the Scarlet Knights will play Alabama in the Round of 64.

As for the other Jersey schools, Seton Hall is facing TCU in an 8 vs. 9 matchup while Saint Peter’s, the MAAC champion, will meet Kentucky in a 2 vs. 15 matchup.

Last night, Lelands sold the football from his final touchdown pass for $518,628 pic.twitter.com/79YA3391Ik

The Nets stayed hot over the weekend, winning their third game in a row despite Kyrie Irving being forced to sit courtside and watch. Kevin Durant picked up the slack in his absence, dropping 53 points on the Knicks. Durant called out New York City Mayor Eric Adams in his postgame press conference as well.

Brooklyn improves to 35-33 on the season and has pulled to within 4.5 games of sixth-place Cleveland. On the other side of the coin, the Nets are clinging to the eighth seed by 1.5 games. The Atlanta Hawks and Charlotte Hornets are nipping at Brooklyn’s heels.

Of their final 14 games, only five are on the road. 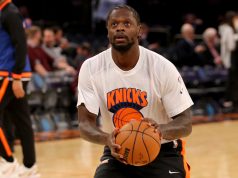