Mel Kiper is back with his second mock for the upcoming 2022 NFL Draft. The biggest name in draft media has made his picks for who he thinks will be off the board in the first round, starting with the Jaguars’ pick at No. 1 overall and ending with the Lions’ pick at No. 32 (a selection Detroit owns via a 2021 trade with the Rams).

For the second straight year, the Jets own two picks in this ever-crucial opening round, with one at No. 4 overall and one at No. 10 (the latter of which is via a 2020 trade with Seattle). There are various areas the Jets must address early on, such as the defensive backfield and the offensive line.

Who does Kiper have Gang Green drafting with its prestigious opening-round selections?

Kiper’s Take: “I’m going to stick with Hamilton to the Jets, who were awful in the secondary in 2021 and could lose Marcus Maye in free agency. Because I know you’re thinking it: No, this is not too high to take a safety. Not a safety like Hamilton, who can make a massive impact against the run and pass. He had eight career interceptions at Notre Dame and could play multiple spots along the defense at the next level. Hamilton is a versatile playmaker who will make a defense better on Day 1. The Jets still have another first-round pick to try to improve their offense.”

Our Take: Just like last time, Kiper has the Jets selecting Notre Dame safety Kyle Hamilton at No. 4 overall.

And just like last time, we agree with this pick.

Marcus Maye’s future in Florham Park is uncertain — he’s coming off a franchise-tag season in which he missed 11 games (he suffered a season-ending Achilles tear in Week 9). It’s reasonable to think general manager Joe Douglas would rather draft a younger safety that won’t be nearly as expensive as Maye.

Considering Hamilton’s physical traits and ability to defend the pass, he’s someone who would immediately improve this Jets secondary. 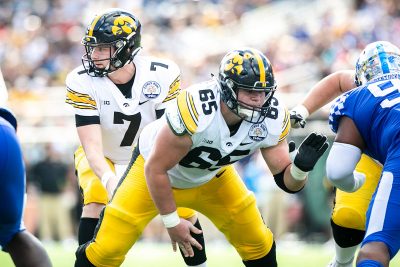 Kiper’s Take: “This could be the sweet spot in the draft for Linderbaum, one of the best center prospects of the past decade. He’s a plug-and-play lineman who can do everything at a high level. The Jets have to get better in front of and around quarterback Zach Wilson, who didn’t have many bright spots as a rookie. Linderbaum is a step in that direction, though if wideout Drake London makes it to No. 10, he’d be a great fit.

“I wouldn’t be shocked if New York added another defender here, too, particularly one of the edge rushers. With four picks in the top 38, general manager Joe Douglas should put multiple selections toward a D that had trouble at every level in 2021.”

Our Take: We wouldn’t mind the selection of Tyler Linderbaum at No. 10 at all, given the assistance it would provide hopeful franchise quarterback Zach Wilson.

The young signal-caller has weapons by his side and the Jets could add more in free agency. Wilson additionally has his pair of offensive tackles set with Mekhi Becton and George Fant on the roster.

But the interior of the offensive line is an issue — the futures of Conor McDermott, Greg Van Roten, and Laurent Duvernay-Tardif are uncertain. As a potential complement to left guard Alijah Vera-Tucker, Linderbaum, who many say is the top true interior offensive lineman in this draft, could be a day-one starter who provides superb protection up the middle.

Although the Jets defense is a true issue, New York should keep Wilson’s pending development in mind at No. 10 and bulk up the offensive line with the pick.